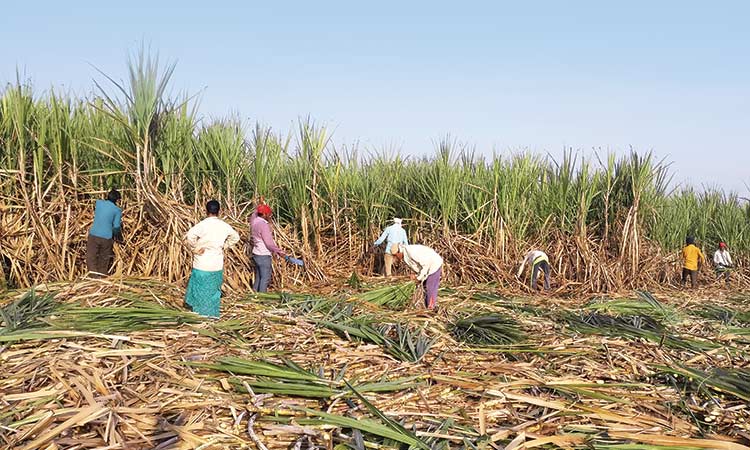 Total sugar production in 2019-20 is expected to be 282 lakh tonnes, which will be 47 lakh tonnes lower than in the current sugar season, the Indian Sugar Mills Association (ISMA) said on Monday.

Based on satellite images procured in the latter part of June 2019, the ISMA has come up the preliminary estimate of sugarcane and sugar production for 2019-20 starting October. This year, the output is likely to be 329.5 lakh tonnes.

Uttar Pradesh, the leading sugarcane and sugar producing state, is estimated to have a sugarcane area at 23.60 lakh hectares in 2019-20, as against 24.11 lakh ha in the previous year, a marginal decrease of about 2 per cent.

“Considering varietal replacement by high yielding cane varieties in remaining parts of the state, an improvement in yield per hectare is expected under normal conditions. Thus, sugar production in UP in 2019-20 is estimated to be around 120 lakh tonnes, which is more or less at the same level of 118.23 lakh tonnes produced in 2018-19,” ISMA said.

In Maharashtra, cane area has gone down by about 30 per cent, mainly due to poor rainfall from September 2018 onwards, followed by low reservoir levels, which adversely affected sowing of 15-month and 12-month crops.

Across the country, about 328.09 lakh tonnes of sugar have been produced in the country and another 1-1.5 lakh tonnes is expected to be produced in the special season till September end in Tamil Nadu and Karnataka, taking total sugar production in 2018-19 to about 329 (329.50) lakh tonnes. “In the current season 2018-19, about 29.5 crore litres of ethanol made from B heavy molasses/sugarcane juice have been supplied to the OMC’s (Oil Marketing Companies) so far. As per standards, this is equivalent to sugar diversion of about 3 lakh tonnes,” ISMA said.

After considering rainfall in July-September 2019, water situation in reservoirs and second set of satellite images in September-October 2019 for across India, ISMA will review the analysis and release its first advance estimates.

“By that time, the crop will be more mature and there will be more clarity on the rainfall and water availability,” ISMA said.

India’s economic health showed signs of recovery as factory production expanded in April, while the country’s May retail inflation remained largely subdued with a marginal rise.

Accordingly, India’s factory production expanded in April 2019 by 3.4 per cent from a revised growth of 0.35 per cent reported for March, but on a year-on-year (YoY) basis, it was lower than the 4.5 per cent growth achieved during the corresponding month of the previous fiscal.

“The cumulative growth for the period April-March 2018-19 over the corresponding period of the previous year stands at 3.6 per cent,” Ministry of Statistics & Programme Implementation said in the ‘Quick Estimates of Index of Industrial Production (IIP)’.

The data revealed that the output rate of the manufacturing sector rose 2.8 per cent in April from a year-on-year (YoY) rise of 4.9 per cent.

However, on a YoY basis, the Consumer Price Index (CPI) in May 2019 was lower than the corresponding period of last year when retail inflation stood at 4.87 per cent.

The data furnished by the National Statistical Office (NSO) showed that the Consumer Food Price Index (CFPI) inflated to 1.83 per cent during the month under review from an expansion of 1.10 per cent in April 2019. Product-wise, prices of vegetables, eggs, meat and fish pushed the retail inflation higher on a YoY basis. In contrast, decline in prices of ‘cereals and products’ and ‘milk and products’ sugar capped the overall food inflation.