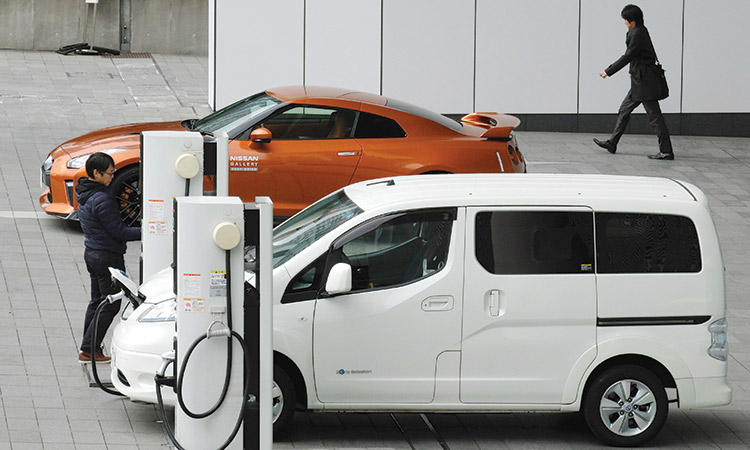 Cars outside the headquarters of Nissan in Yokohama, Japan. Agence France-Presse

They are also exploring the possibility of the Nissan-Dongfeng venture designing and building vehicles tailored for Didi’s ride-hailing service - cars which are likely to be battery-powered and eventually driverless, the people said.

A partnership would help the Japanese automaker meet China’s production quotas for electric vehicles and plug-in hybrids, and would be similar to a venture that Volkswagen set up with Didi last year.

As part of the planned deal, Nissan’s China joint venture would help manage fleets of gasoline-fuelled and electric cars in a dozen cities for Didi, the country’s dominant ride-hailing firm. It would also help maintain and service the fleets, whose cars are leased to independent drivers.

Nissan’s venture with Dongfeng Group would supply the vehicles although some cars may also come from Dongfeng’s own brand, the people said, declining to identified as the talks were not public.

Three sources said the talks, underway since last year, were far along although one source warned that more scrutiny at both companies over how money is invested could delay finalising of the deal.

Nissan, which is grappling with a strained relationship with partner Renault SA after ousting their former chief Carlos Ghosn, has forecast a fourth straight year of steep profit decline for this financial year.

Didi is under pressure from investors to deliver a quicker and sounder route to profitability, separate sources familiar with the matter have said.

Convincing consumers of the merits of the electric cars is not easy, government subsidies for purchasing EVs are being rolled back and vehicle demand is slowing, with consumer sentiment also hit by the trade war with the United States.

“It is now common practice for automakers like Nissan to make sure they have some guaranteed sales volume for new-energy vehicles,” said Yale Zhang, head of Shanghai-based consultancy Automotive Foresight.

Automakers such as Geely, SAIC, Dongfeng, Changan and FAW also have created car-sharing and ride-hailing services.

Under the planned deal, in congested cities where municipal governments have restricted the use of gasoline-fuelled cars, Nissan and Dongfeng would provide battery electric cars. Two sources said one model would likely be an all-electric version of the Nissan Sylphy sedan.

Other methods automakers can pursue to meet NEV production quotas include buying NEV credits from other carmakers with excess points, investing in or forming a venture with a Chinese EV startup or buying a car-sharing operator in China, sources at Nissan said.

They added that longer term, Nissan hopes the venture with Didi will provide invaluable insight into catering to consumers who opt out of car ownership and rely on ride-hailing and car-sharing services - a trend that is expected to gather steam as traffic jams in China’s biggest cities get worse.

Didi’s desire to have its own vehicles designed specifically for ride-hailing is something it has also discussed with Volkswagen as part of their separate joint venture, sources have said previously.

Such cars will likely look very different from vehicles used to commute today.

They would have little occasion to go at fast speeds so their engines could be much smaller, while other features preferred by car owners such as big wheels and sleek aerodynamic styling could be taken out or significantly modified. Since the cars would be mostly carrying one or two people at a time to work, they are likely to have fewer seats and more space for luggage, sources have said.

Meanwhile, former Nissan chief Carlos Ghosn abruptly cancelled plans on Friday for what would have been his first press conference since his arrest in November, after his daughters expressed concern it could invite retaliation by Japanese authorities, his lawyers said.

“In Japan we just don’t know what terrible thing will happen next, not just limited to rearrest,” one of his lawyers, Junichiro Hironaka, told reporters outside his office.

The lawyer said consequences could also include loss of bail, but did not give further details. The Japanese government’s chief spokesman Yoshihide Suga has said that Ghosn is being treated in accordance with Japanese law.