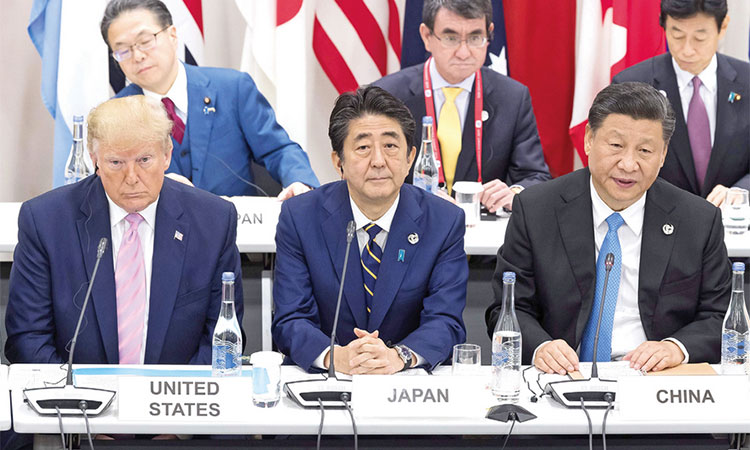 US President Donald Trump (left) sits with Japan’s Prime Minister Shinzo Abe (centre) and China’s President Xi Jinping as they attend a meeting on the digital economy at the G20 Summit in Osaka on Friday. Agence France-Presse

As heads of the world’s 20 leading economies began their summit in Osaka, Trump said he was hopeful that Saturday’s talks would be “productive”.

Global equities have enjoyed a largely positive couple of weeks on hopes for progress in the head-to-head meeting between the leaders of the world’s top two economies, though the possibility of failure persists.

Traders were biding their time on Friday, with London’s main FTSE 100 index drifting 0.2 per cent higher in afternoon trading. Paris added 0.4 per cent and Frankfurt rose 0.6 per cent.

Wall Street opened higher, with the Dow gaining 0.4 per cent.

The mood in Asia was more downbeat with Shanghai ending down 0.6 per cent and Tokyo and Hong Kong each off 0.3 per cent.

The dollar was down slightly against main rivals, while sterling did not react to official data confirming that Britain’s Brexit-facing economy grew by 0.5 per cent in the first quarter.

There remains some uncertainty about how the meeting will go, with the Wall Street Journal reporting that Xi plans to demand the US reverse a ban on doing business with Chinese telecoms giant Huawei as a condition for kickstarting talks.

“The Trump-Xi meeting at the G20 is front and centre,” said analyst Neil Wilson at Markets.com.

“I would think that for Trump and Xi to agree to delay the additional tariffs and for detailed talks to resume would be sufficient to leave investors happy that things are moving.” Elsewhere Friday, world oil prices drifted higher as dealers await next week’s output meeting of Opec and other top crude-producing nations, notably Russia.

Opec is on red alert over escalating US-Iran tensions that have fuelled recent strong oil-price gains − but producers are likely to extend output cuts agreed late last year, according to analysts.

“The outcome of the Opec meeting in Vienna on Monday seems to be a done deal,” noted City Index analyst Fiona Cincotta.

“Most of the major players have already indicated that the group plans to extend production cuts put in place in December and there has been no major dissenting voice among the oil producers.” At the end of a volatile week for bitcoin, the cryptocurrency shot to $11,651, up nearly $1,000 from Thursday.

Meanwhile, eurozone government bond yields on Friday fell towards record lows in many cases on tepid inflation data for the bloc and ahead of a G20 meeting this weekend at which the potential easing of a trade conflict will be in focus.

Flatlining inflation in the single currency bloc has forced the European Central Bank to allude to more stimulus, pushing yields to record lows in recent weeks.

And though underlying inflation in the eurozone rebounded in June, offering some comfort to the ECB, the headline figure of 1.2% for the month was still well short of the improvement policymakers are hoping for.

“It’s one of those situations where the market has seen the details and said ‘it’s not changed our view that we’re not getting inflation from anywhere’, so it was a bit of damp squib really,” said Rabobank rates strategist Lyn Graham-Taylor.

Italian debt, seen as one of the biggest beneficiaries of ECB largesse, outperformed, with 10-year yields dropping 6 bps to 2.07%, its lowest in a week.

The closely watched spread over Germany tightened to 240 bps.

The breakdown of the eurozone inflation numbers showed the ‘core’ figure, excluding volatile food and energy prices, jumped to 1.2 per cent from 1 per cent in May.

Still, that was in line with expectations and still below April’s reading, suggesting that overall price pressures are modest despite years of extraordinary stimulus from the ECB.

“The increase in core inflation seems to have been due to a rebound in volatile transport and holiday prices, rather than rising underlying price pressures, so it should not deflect the ECB from policy in the coming months,” analysts at Capital Economics said in a note.

Concern over China’s stance on trade negotiations with the United States ahead of the weekend’s G20 meeting also supported safe haven government debt.

US President Donald Trump has agreed to no preconditions for his high-stakes meeting with Chinese President Xi Jinping this weekend and is maintaining his threat to impose new tariffs on Chinese goods, White House economic adviser Larry Kudlow said on Thursday.