Nissan to focus on Renault alliance on mutual respect - GulfToday

Nissan to focus on Renault alliance on mutual respect 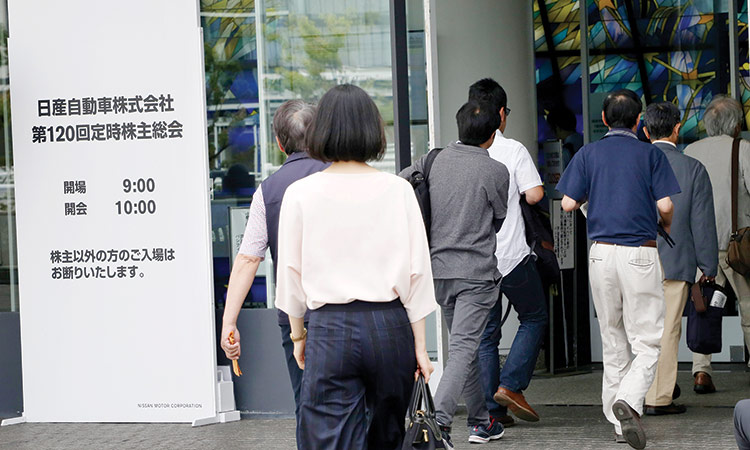 Nissan Motor on Tuesday threw cold water on hopes for a quick fix to strained relations with France’s Renault, saying inequality between the partners could unravel their two-decade-old automaking alliance.

Speaking at Nissan’s annual general meeting (AGM) in Yokohama, Japan, Chief Executive Hiroto Saikawa said he wanted to preserve the spirit of equality - in an alliance whose shareholding structure Nissan has long seen as lopsided.

During a three-hour affair peppered with heckling, shareholders returned Saikawa to the automaker’s board as widely expected and in defiance of opposition from proxy advisors. The executive now faces the task of repairing trust with Renault, which has deteriorated in past weeks as the French automaker has sought more control within Nissan.

“We want a win-win relationship with Renault. The alliance has been successful until now because we have respected each others’ independence,” said Saikawa.

The comments are some of the starkest in recent memory and signal Nissan’s deepening concern over the alliance, in which Renault owns 43% of the Japanese automaker, which in turn holds a 15%, non-voting stake in its partner.

Saikawa also said Nissan would “postpone discussions” on the future direction of the alliance as the automaker prioritised recovery of its dismal financial performance.

Shareholders at Japan’s second-biggest automaker voted in favour of a new governance structure and 11-member board to address lax auditing revealed after the arrest of Ghosn over financial misconduct allegations he denies.

Saikawa had initially pushed back at those demands, but late last week Nissan granted seats to Senard and Renault CEO Thierry Bollore on its nominations and auditing committees respectively, even though Nissan itself will not be represented.

The automakers’ deteriorating ties were highlighted by a shareholder who accused Senard, who serves as vice chairman of Nissan’s board, of failing to look after the interests of Nissan and its employees as promised when he took up his role in April.

In response, Senard told shareholders: “Since I arrived, I have done everything I can to smooth the relationship of an alliance that I found in a much worse state than I thought.”

“I had no intention to be aggressive towards Nissan,” he said. “I beg you to believe me on that.”

Saikawa won a reprieve on his leadership, fighting off a rare public rebuke by international proxy firms International Shareholder Services and Glass Lewis, which earlier this month urged shareholders to vote against reappointing the former Ghosn lieutenant as director.

Still, people at both automakers have said the recent public disagreements have dissolved the image of unity the automakers promoted only months ago, raising questions about whether Saikawa, Senard and former Ghosn ally Bollore are the right people to break from Ghosn’s legacy in the longer term.

Some Nissan shareholders at the meeting said they were concerned that Saikawa has been overly focused on rebuffing Renault, rather than finding ways to cooperate with its partner to achieve the “win-win relationship” he promoted on Tuesday.

“There are so many alliance-related issues which are occupying the company that it’s a shame that Nissan is unable to focus on bigger, external issues” like improving global competitiveness, shareholder Hideyuki Tamura said after the meeting.

“It’s not to say we need to merge, but I’m worried that our leadership may be lacking a forward-looking vision of the alliance.”

Meanwhile, Japanese shares retreated on Tuesday as the combination of the yen’s rise to a near six-month high versus the dollar and brewing US-Iran tensions hit exporters and curbed risk appetite.