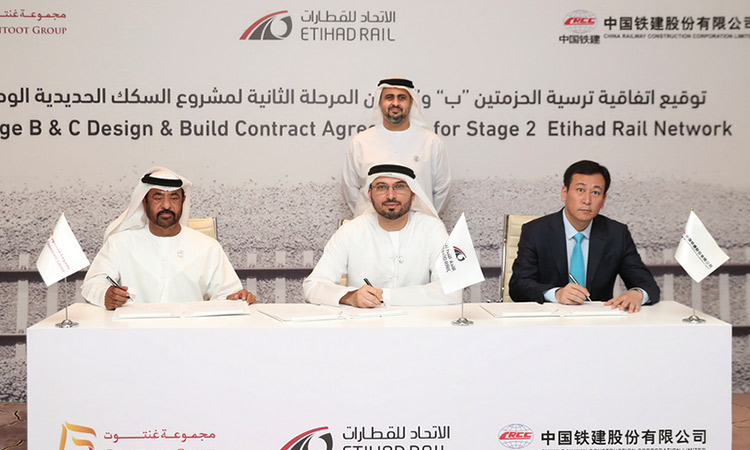 Business Bureau, Gulf Today
Etihad Rail, the developer and operator of the UAE national railway, has approved the award agreement for civil and track works of Packages B and C for Stage Two of the UAE national railway network connecting Abu Dhabi and Dubai, during a board meeting, chaired by Sheikh Theyab Bin Mohamed Bin Zayed Al Nahyan, Member of the Abu Dhabi Executive Council and Chairman of Etihad Rail. Package B runs for 216km, and Package C runs for 94km, and the two packages are part of the 605km line from Ghuweifat to the Port of Fujairah on the eastern coast.

Sheikh Theyab stressed the importance of the UAE national railway network, which is recognised as one of the most important economic and development projects  in the UAE, saying, “Etihad Rail will sustain the growth of our transport industry and freight carriage sector throughout the UAE, as railway systems are one of the most important means of transport on which countries depend to achieve their economic and social  objectives.”

He added that Etihad Rail’s strategy is to build a railway network consistent with its clients’ needs, and has signed a number of Memoranda of Understanding  (MoU’s) with national companies who are looking to use the railway network as a business solution, especially since goods of all kinds can be transported on railways at lower cost and more efficiently compared with traditional transport means.

Etihad Rail is pioneering new horizons for development and transport, and is moving forward to sustain the UAE transport sector through the tremendous progress achieved  in building the UAE national railway network as a safe, modern, and cost effective means of transport.

Sheikh Theyab said that the launch of Packages B and C as part of the second stage of this project to connect all of the emirates is a milestone in the future prospects  of the United Arab Emirates. The importance of the two packages lays in the fact that they link Khalifa Port, Khalifa Industrial City (Kizad), and Jebel Ali Port. The project includes links to strategic ports and industrial areas nationwide, along a distance  of 310 km. It is the backbone of the UAE national railway network, upgrading the transport and shipping industry by connecting ports, manufacturing and production points, as well as urban locations.

Sheikh Theyab praised the efforts of the board members in following the strategy of Etihad Rail and its future aspirations, thanking them for their hard work.

The works on this part of Stage Two focus on the design and construction of rail infrastructure, including earth works, bridges, tunnels, animal-crossings and track-laying,  connecting Package B with Package A, and Package C with Package B. The total value of the works is Dhs4.4 billion.

Etihad Rail has previously awarded Package A to a consortium of the China State Construction Engineering Corporation and South Korea’s SK Engineering and Construction.  When complete, the 1,200Km Etihad Rail project will link the UAE’s principal centers of industry, manufacturing, production, population, and import/export points, forming an integral part of the GCC-wide railway network.

Etihad Rail was established in June 2009 under Federal Law No. 2, with the mandate to manage the development, construction and operation of the UAE’s national freight and passenger  railway network. The railway network will link the principal centres of population and industry of the UAE, and will form a vital part of the planned GCC railway network across the GCC.

Etihad Rail has successfully completed Stage One of the network which is now fully operational having been delivered on schedule and within budget. The route spans 264 km, transporting  sulfur from sources at Shah and Habshan to the export point at Ruwais. Stage Two links the United Arab Emirates and Saudi Arabia from Fujairah to Ghuweifat via Mussafah, Khalifa Port and Jebel Ali Port. Built to international standards, Etihad Rail’s state-of-the-art  network will span approximately 1,200 km, acting as a catalyst for economic growth and sustained social development. Upon completion, the railway will redefine logistics and transport in the region, providing a modern, safe, efficient and sustainable mode  of transport that will connect all regions of the UAE to its neighboring GCC countries. 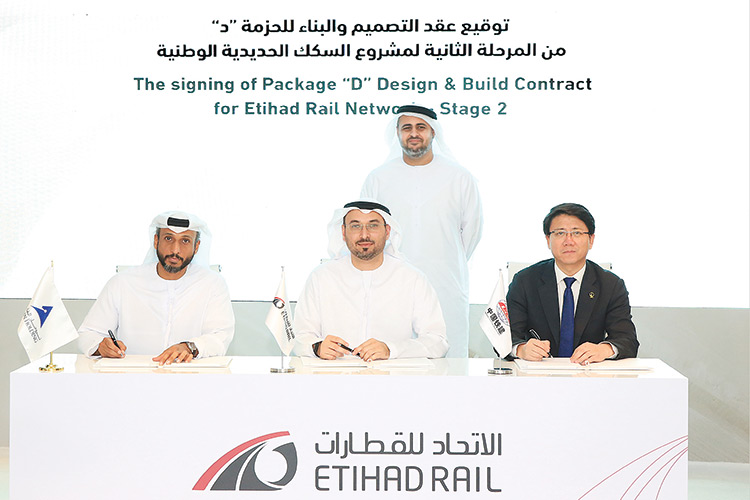 Sheikh Theyab Bin Mohamed Bin Zayed Al Nahyan, Member of the Abu Dhabi Executive Council, Chairman of Abu Dhabi Crown Prince’s Court and Chairman of Etihad Rail, has supervised a board meeting during which he approved a Dhs4.6 billion tender for the civil works and construction of Package D of Stage Two of the UAE’s national railway. Package D will link the ports of Fujairah and Khorfakkan to the network at the Dubai border with Sharjah, and stretches over a distance of 145 kilometres.