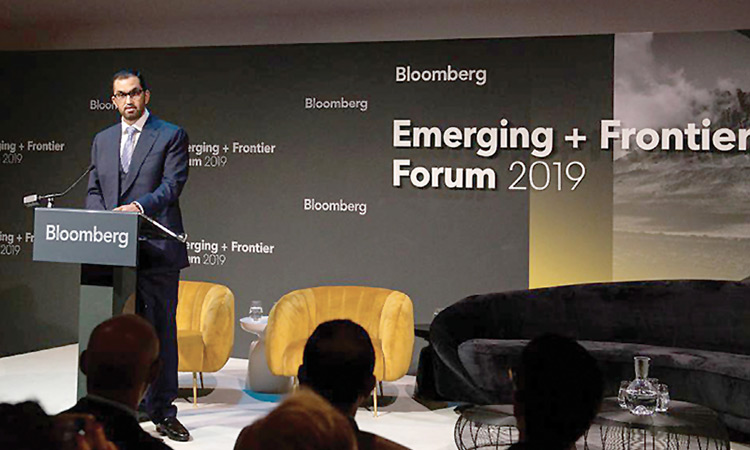 Speaking during the day-long forum which was opened by Michael Bloomberg, founder of Bloomberg LP and Bloomberg Philanthropies, Dr Al Jaber began his remarks by noting that stability and energy security are paramount to economic growth.

“As such, the United Arab Emirates, with the sixth largest oil reserves in the world, views very seriously any threat to security of energy supplies. Any attack on a single tanker is an assault on the entire international community. It is a violation of the core values of free trade, peace, and prosperity that the UAE and peaceful nations stand for. That is why the UAE will work together with our friends and allies to defuse and deescalate the current threat and help ensure regional stability and the security of energy supplies to global customers,” Dr Al Jaber said.

Dr Al Jaber added, “Now is the time for wisdom, diplomacy and the concerted efforts of the international community, as we all have an interest in stable and secure market. They are the essential foundation for economic progress.” In a speech attended by finance ministers and central bank governors, Dr. Al Jaber went on to address the impact of global economic trends on energy demand. He highlighted that by 2030, emerging economies will consume two-thirds of the world’s energy and manufactured goods, driven by an unprecedented expansion in the middle class. Adnoc, he said, is building on its history and nurturing the national oil company of the future as it transforms its business model to stay ahead of this demand for energy.

Dr Al Jaber described Adnoc’s expanded approach to strategic investment and partnerships as a key pillar of its transformation, stating, “We have attracted new concession partners from India and China, ensuring greater market access to the world’s highest growth economies. We have struck a series of strategic equity partnerships across our value chain, to enhance our operational capability and strengthen our position in the market, this includes, a fully integrated drilling business with Baker-Hughes, a major expansion of our refining and trading arms with ENI and OMV and a joint venture with OCI-launched just last week-to create the world’s largest exporter of nitrogen fertilizer.”

Al Jaber added that ADNOC is opening up to new categories of partners from the financial sector and broadening its investor base.

“We entered the global capital markets for the first time, issuing a $3 billion asset-backed bond. We concluded the first-ever listing of one of our portfolio companies, Adnoc Distribution, and in partnership with BlackRock and KKR, we completed the largest infrastructure investment in the Middle East, unlocking $4 billion in value.

“These transactions and many more in the pipeline speak to our drive to optimize our capital allocation, maximize our capital efficiency, improve the portfolio returns of our asset base, and reinforce our balance sheet.

“Our overall financial health was recently validated by the Fitch Rating Agency when they assigned the Adnoc Group their highest rating for any oil and gas company in the world. This is a vote of confidence in our smart growth strategy and a strong signal to other potential partners from around the world that Adnoc is open and ready for business,” Al Jaber added.

Commenting on Adnoc’s legacy of strong environmental leadership, Al Jaber said that Adnoc has always operated with the mindset of responsible production and is preparing for a world that needs more energy but demands fewer emissions.

“We lead the industry with the lowest methane intensity and we are investing in technology that captures carbon dioxide from industrial sources. Having opened our region’s first carbon capture utilization and storage facility that currently captures 800,000 tonnes of CO2 annually, we plan to expand its capacity six times over the next decade to capture the same amount of CO2 that would be absorbed by 5 million acres of forest.”

Dr Al Jaber concluded by reaffirming that Adnoc will always remain a reliable partner and a responsible, efficient, and trusted supplier of the world’s energy needs.