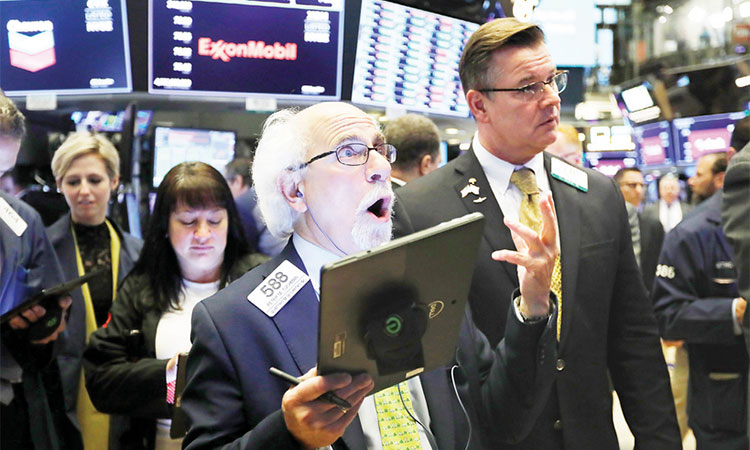 World stock markets surged on Thursday, with the US benchmark S&P 500 hitting a record high, while the 10-year US Treasury yield fell below 2% as investors digested a signal from the Federal Reserve of potential US interest rate cuts as soon as its next meeting.

The US dollar also weakened after the Fed - the US central bank - on Wednesday indicated a marked shift in sentiment even as it left its benchmark rate unchanged for now.

“We have obviously morphed into the Fed taking the pole position as far what’s driving the market right now, both domestically and on a global basis as well,” said Mike Mullaney, director of global markets research at Boston Partners.

“It’s risk-on trade again right now for the time being and I don’t see anything on a near-term basis that is going to disrupt that.”

Oil prices also surged, lifted by the Fed as well as by news that Iran shot down a US military drone, raising fears of a military confrontation between Tehran and Washington.

MSCI’s gauge of stocks across the globe gained 1.02%. The index hit its highest since May 1.

Energy, technology and industrials were among the best-performing S&P 500 sectors.

“Cyclicals are definitely getting a big pop today,” Mullaney said.

The pan-European STOXX 600 index rose 0.52%, reaching its highest since early May.

Benchmark government bond yields in the United States and Europe tumbled following the Fed’s decision, with the US 10-year note yield falling below 2% for the first time in 2-1/2 years.

“The statement indicated the Fed no longer insists on a pause or patience, providing an open ear to doves at upcoming meetings. Also critical... acknowledgment that inflation pressures are muted,” said Jim Vogel, interest rate strategist at FTN Financial in Memphis, Tennessee.

“As difficult as it might be to imagine, rates are also free to fall further,” he added.

Oil rose more than 3% towards $64 a barrel on Thursday after Iran shot down a US military drone, raising fears of a military confrontation between Tehran and Washington.  Expectations that the US Federal Reserve could cut interest rates at its next meeting, stimulating growth in the world’s largest oil-consuming country, and a drop in US crude inventories also supported prices.

“The risk of a military conflict in the Middle East has risen because of a ratcheting up of tensions between the United States and Iran,” said Abhishek Kumar of Interfax Energy in London.

“Elsewhere, the US Federal Reserve has signalled its willingness to loosen monetary policy over the coming months, which is being perceived as favourable to oil demand.”

The drone was downed in international airspace over the Strait of Hormuz by an Iranian surface-to-air missile, a US official said. Iran’s Revolutionary Guards said the drone was flying over southern Iran.

Tension has been rising in the Middle East, home to over 20% of the world’s oil output, after attacks on two tankers near the Strait of Hormuz, a chokepoint for oil supplies. Washington blamed Tehran for the tanker attacks.

Concern about slowing economic growth and a US-China trade dispute has pulled oil lower in recent weeks. Brent reached a 2019 high of $75 in April.

“The Fed and the cutting of rates is something that will provide more substantial support,” he said.

Also propelling oil higher on Thursday was a decline in US crude inventories and the prospect of prolonged supply restraint by producer group OPEC and its allies.

The Organization of the Petroleum Exporting Countries and allies including Russia agreed this week to meet on July 1-2, ending a month of wrangling about the timing.

The coalition known as OPEC+ looks set to extend a deal on cutting 1.2 million barrels per day of production. The deal expires at the end of June.