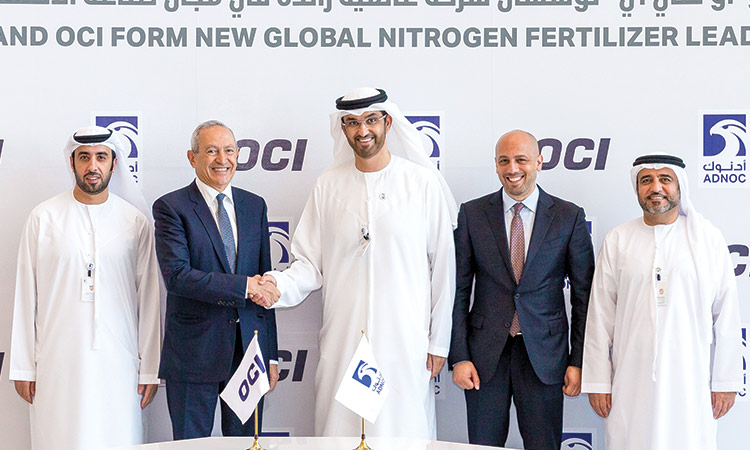 The JV will become the largest export-focused nitrogen fertiliser platform globally and the largest producer in the Mena region with a production capacity of 5 million tonnes of urea and 1.5 million tonnes of sellable ammonia. Annual revenues for the combined entity are $1.74 billion, based on 2018 pro forma figures. Adnoc and OCI will own a 42 per cent and 58 per cent stake in the JV respectively.

This combination brings greater geographic diversity to the platform’s Mena production channels, enabling greater combined market access to strengthen market share and better serve its customers around the world. It will have a centralised commercial team, supported by a robust storage and distribution infrastructure with access to key ports on the Mediterranean, Red Sea and Arabian Gulf.

The JV will operate a young, state-of-the-art asset base with low maintenance costs and strong free cash flow generation. As a result, the company will be well-positioned to pay its shareholders attractive dividends and to fund future organic and inorganic growth opportunities.

In conjunction with this joint venture, Adnoc Fertilisers has also signed a new long-term gas supply agreement with Adnoc, which will provide its facilities in Ruwais with the required feedstock for its operations based on a competitive pricing formula. The JV will be based in Abu Dhabi and registered in the Emirate’s international financial centre, Abu Dhabi Global Market (ADGM), furthering the development of fertiliser expertise and trading in Abu Dhabi. The board of the new entity will consist of six members nominated by OCI and four nominated by Adnoc. Dr. Sultan bin Ahmad Sultan Al Jaber, Minister of State and Adnoc Group CEO, will be Chairman of the Board.

Nassef Sawiris will assume the role of CEO of the JV, alongside his current role as CEO of OCI. His leadership will be supported by a joint management team of experienced key executives from OCI and Adnoc, which will drive value creation through the unlocking of substantial operational, supply chain, marketing and trading synergies across the combined platform. Dr. Al Jaber said, “We are extremely pleased to have created this new joint venture with OCI who is a world leader in nitrogen fertilisers and share our ambition and vision to grow our new combined fertiliser business. Pooling our assets and capabilities is a value-enhancing step for both companies, allowing us to leapfrog competitors to become the top nitrogen export platform globally. It will also enable us to access new markets, benefitting both existing and new customers.” He added, “This unique business combination is in line with Adnoc’s approach to value-added partnerships and will improve the profitability and cash flow of our fertiliser portfolio. It also supports Adnoc’s objectives to attract investors to Ruwais by leveraging its strategic location, world-class logistics and the UAE’s abundant gas resources at commercially attractive terms. It is another milestone in the delivery of Adnoc’s 2030 strategy and our ambitions to expand Adnoc’s Downstream portfolio.”

In turn, Sawiris commented, “I am very pleased to start a long-term strategic partnership with Adnoc, a company which has a clear downstream strategy and drives to unlock value. This partnership creates a first-of-its-kind export platform with best-in-class cash conversion metrics. I believe that this platform has significant potential for future growth and value creation, with the support and under the guidance of its two key shareholders”. Adnoc Fertilisers has a track record of more than 35 years in fertiliser production, operating two plants in Adnoc’s integrated downstream complex in Ruwais in the UAE. The first plant, FERTIL-1, began production of ammonia and urea in 1983, and the second plant, FERTIL-2, became operational in 2013. The plants combined have an annual capacity of 1.2 million tonnes of gross ammonia and 2.1 million tonnes of urea.