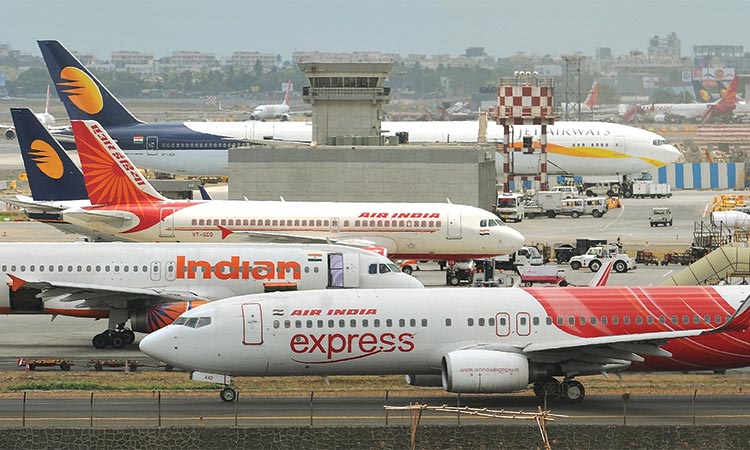 Aircrafts seen on the tarmac at the international airport in Mumbai. Agence France-Presse

This was the first face-to-face interaction from the UAE side with a member of Prime Minister Narendra Modi’s Council of Ministers since India’s new government was sworn in on May 30.

The UAE’s leaders had congratulated Modi on telephone and through cables following the Prime Minister’s landslide election victory last month.

He is also Minister of State for Commerce in the new government.

The Ambassador briefed the Minister on the status of a bilateral air service agreement and reiterated a request by the UAE’s civil aviation authorities on the urgent need to start negotiations on revising the existing agreement since full capacity has been reached under the present pact.

Dr. Al Banna told the Emirates News Agency (WAM) that Puri was “very positive” in his response to issues raised by the UAE during today’s discussions.

The Minister stressed that the UAE and India shared an important strategic relationship.

Talks on renegotiation of the bilateral air service agreement are now expected to begin in two to three months.

Dr. Al Banna told Puri that the UAE followed an open skies policy and has never refused requests by Indian carriers to expand their operations in the emirates.

He said the current conditions in the civil aviation market called for an increase in per capacity.

At present, there are 1,068 flights permitted per week between the UAE and India in both directions.

UAE airlines operate just over 400 of these flights and Indian carriers operate over 500 flights. Around 138,000 seats per week are sold by UAE carriers.

There is also scope for more cargo flights between the UAE and India with an increase in demand for such traffic.

Earlier this week, Puri said airlines from the Gulf and other international carriers should be given the foreign traffic rights Jet Airways, India’s major private airline which shut down recently.

“I believe that India should not be restrictive in terms of number of flights and so on, because if you have the capacity domestically, utilise it, otherwise don’t deprive ourselves of the economic opportunity.

Because, I think if you have more players, prices come down,” he explained.

Travelers on India-Gulf routes are facing crippling price hikes following the collapse of Jet Airways and the closure of Pakistan’s air space to flights originating in India following recent discord between the two countries.

Aircraft flying from airports like Delhi to Gulf countries now have to take a longer route to India’s western region like Mumbai or Ahmadabad and then fly over the sea to destinations in the Gulf.

Earlier they used to overfly Pakistan which reduced flying time by more than one hour and saved costly fuel compared to the current route.

This applies to reverse traffic from the Gulf to India as well. Jet Airways had a high volume of traffic to major airports in Gulf countries. No Indian domestic carrier has so far been able to fill the gap caused by the shortage of these seats which used to be in high demand.

Puri has set up a committee to distribute the foreign traffic rights of the defunct Jet Airways among various airlines. India’s domestic carriers are vying for these rights, but since they have a capacity problem, Gulf airlines may be allotted these rights to ease the woes of passengers.

Meanwhile, the Centre for Asia Pacific Aviation, CAPA, has forecast profitability outlook for India’s aviation sector of US$500 to $700 million in the financial year 2020. Before the closure of Jet Airways, CAPA had predicted a consolidated loss of $550- $700 million for this sector.

“The above profitability projections are assuming oil at $70-$75 per barrel and the US dollar trading at Indian rupees 70 to 72, and are subject to airlines maintaining pricing discipline,” CAPA said.