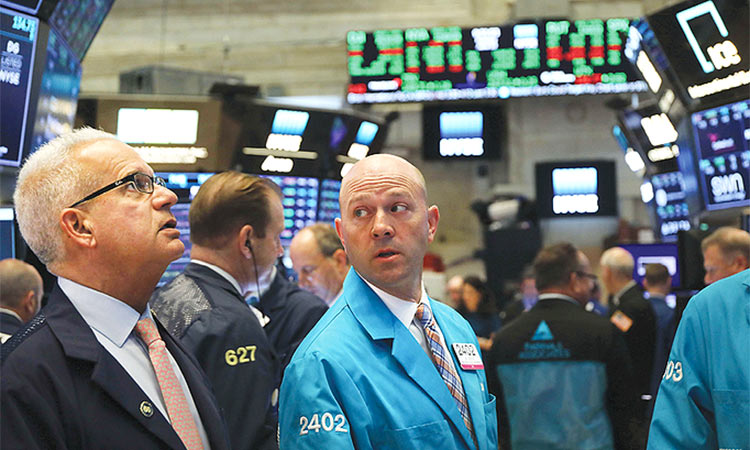 With Frankfurt re-opening after a one-day holiday, German investors returned to shares after a U.S.-Mexico deal on Friday apparently averted tariffs threatened by President Donald Trump.

Investors are also heartened by expectations the US Federal Reserve will soon start cutting rates, with markets pricing in a cut by July. Those hopes were re-ignited by Friday’s disappointing jobs report, and could be boosted further if retail and inflation data this week also disappoint.

“We are in a situation where bad news is good news,” said Silvia Dall’Angelo, senior economist at Hermes Investment Management, noting the recent dovish signal from Fed Chair Jerome Powell and recent lacklustre US data.

“Equity markets are relying on loose monetary policy, but they are also taking Trump at face value so I expect more volatility ahead,” Dall’Angelo said.

The pan-European STOXX 600 climbed 0.8%, on course for a sixth day of gains in the last seven. MSCI’s index of global equities rose 0.3% for a seventh day of gains The Mexico news and interest rate bets fuelled a strong close on Wall Street on Monday, with the Dow Jones enjoying its longest winning streak in 13 months. It was preparing to build on those gains, according to equity futures, which were up 0.4%. S&P500 and Nasdaq futures rose 0.5% to 0.7%.

With fears easing that the United States would launch a trade war with Mexico, investors appeared to shrug off Trump’s threat to impose more tariffs on China if no progress was made in talks with President Xi Jingping. They are expected to meet at a Group of 20 summit on June 28-29.

“It looks like we will have to wait to see at the end of the month, to see what the next move will be,” said David Madden, an analyst at CMC Markets. “In that time, if nothing is said, stocks could press on higher.” There are hopes also of stimulus from China, where shares climbed 2% after Beijing tweaked policy on major investment projects in to support its slowing economy.

The dollar held steady above a two-and-a-half-month low against a basket of currencies Rising expectations for a Fed rate cut were tempered by a reluctance to close positions before the G20.

The dollar index was flat after advancing 0.2% on Monday. Ten-year US Treasury yields rose to a one-week high as investors who had dashed for bonds last week started buying shares again.

But investors are likely to stay positioned for more market turbulence through bond positions.

“You have to be long globally on fixed income,” said Said Haidar, chief investment officer at Haidar Capital. “That move is not done yet. The global data just keeps on going down.” In commodities, oil prices rose, bolstered by firmer financial markets and expectations that producer group OPEC and its allies will keep withholding supply. Brent crude futures were at $62.67 at 0741 GMT, up 0.4%.

Gold fell to a more than one-week low on Tuesday as the United States halted its plans to impose tariffs on Mexico, boosting appetite for riskier assets like equities at the expense of alternatives like bullion.

Concerns over global trade and expectations the Federal Reserve would cut US interest rates sent spot prices to their highest since April 2018 last week at $1,348.08.

Bullion lost more than 1% on Monday after markets took heart from a deal between the United States and Mexico to avert yet another tariff war.

However, US Secretary of State Mike Pompeo also warned the US could still slap tariffs on Mexico if not enough progress was made on its commitment to stem illegal immigration.

“The outlook for the world economy has not changed and that leads us to believe that the upside is still intact, but the (gold) market needs weaker stocks and a weaker dollar to see that through,” Saxo Bank commodity strategist Ole Hansen said.

“Right now stocks are not weakening and that’s creating profit-taking,” he said. “The continued recovery in stocks is leading to recent established longs (in gold) being closed.”