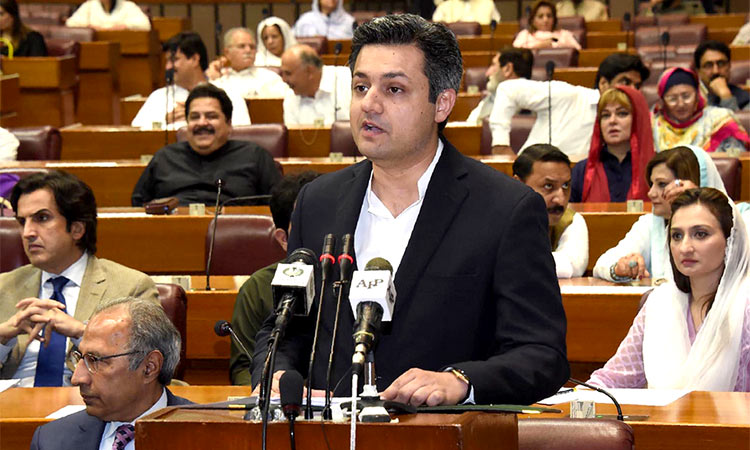 Minister of State for Revenue Hammad Azhar speaks as he presents the budget for the year 2019-20 in the National Assembly on Tuesday. Agence France-Presse

Tariq Butt
Pakistan Prime Minister Imran Khan’s government vowed to collect more taxes and make cuts in spending in a closely watched budget presented to parliament Tuesday, weeks after reaching a deal with the IMF for a $6 billion bailout.

Before a rowdy parliamentary session, the government announced plans to slash civil expenditure and freeze military spending while promising to substantially raise revenues to stem a yawning fiscal deficit, as it pledged to collect 5.5 trillion rupees ($36 billion) in taxes.

The government kept the defence budget static at Rs1.15 trillion for next fiscal 2019-2000 in its annual federal budget unfolded in the National Assembly amid vociferous slogan chanting by the opposition lawmakers on Tuesday.

Minister of State for Revenue Hammad Azhar presented the budget with Prime Minister Imran Khan sitting near him to listen to his speech and said that there will be no compromise on the efficiency of the armed forces although their budget remains unchanged from last fiscal year at Rs1150 billion.

The opposition lawmakers came before the speaker’s dais and kept sloganeering throughout the speech. They targeted the prime minister and his sister and constantly hurled allegations over them.

Azhar said the federal ministers agreed for 10 percent cut in salaries. An amount of Rs40 billion subsidy will be provided on gas and electricity. No increase was given in the salaries of civil servants in the highest grades of 21 and 22. Pensions for retired employees was hike by 10 per cent. Minimum wage was set at Rs17,500. Trade deficit was reduced by $4 bullion. Trade deficit stands at $22 billion.

The minister set an ambitious revenue collection target of Rs5.5 trillion. Keeping in view that the Tax-to-Gross Domestic Product (GDP) ratio is significantly lower in the region, he said the focus is on increasing tax collection. Only two million people, including the salaried class, paid taxes.

He said stringent measures would be taken to curb money-laundering. He said the existing laws would be further strengthened.

“Currently there are at least 3.1 billion commercial customers registered out which only 1.4 million customers are tax-return filers. Similarly, there are 50 million bank accounts in the country but only 10 per cent of them are tax payers.”

An amount of Rs24b was earmarked for Havelian Thakot motorway;. Samrial Kharian motorway to also be constructed. The government earmarked Rs60bn for human development. Higher education will receive Rs45b; agriculture will receive Rs1.2tr in the federal development budget; and Rs45.5bn were set aside for nine projects in Karachi and Balochistan development package to get Rs10.4b and Rs30bn for water projects.

Azhar said there has been no increase in exports in the last five years. The circular debt has peaked to Rs1200 billion - it is increasing by Rs38 billion per month.”

He said Pakistan witnesses a $20 billion current account deficit while the trade deficit touched $32 billion in the outgoing fiscal year. “The economy has deteriorated due to expensive imports and subsidised exports.”

The minister explained that heavy borrowing was done to keep rupee at a higher rate which could not be sustained for long. Consequently, the rupee depreciated in December 2018 and the economic growth slowed resultantly.

He outlined measures taken by the government to sustain the economy. “We reduced trade deficit while remittance saw an increase of $2 billion. The current account deficit dropped by $4 billion. We borrowed a total of $9.2 billion from China, Kingdom of Saudi Arabia, and the United Arab Emirates.”

The minister said the government’s running expenses will be slashed to Rs437bn from Rs460bn. “As regards social welfare programmes, we are introducing four main policies. Rs200b will be allocated to providing power at subsidised rates to low power consumers. One million people will be targeted for ration cards under the government’s Ehsas programme. Eighty thousand people will be given interest free loans under a mother and child nutrition program. Seven hundred thousand disabled persons will be given mobility and functionality aids.”

Azhar said that under the Benazir Income Support Programme (BISP), which has been placed under Ehsas, 5.7m extremely poor households will be given Rs5,000 as income support each month. Rs110bn have been set aside for this.

He said the government’s key priorities were public welfare and wellbeing and reducing the external deficit. The current account deficit will be reduced to 6.5pc in the new fiscal. Exports will be boosted through a revised duty structure. Power and gas will be cheapened and Free Trade Agreements will be re-evaluated. Pakistan will be made a part of the international value chain.