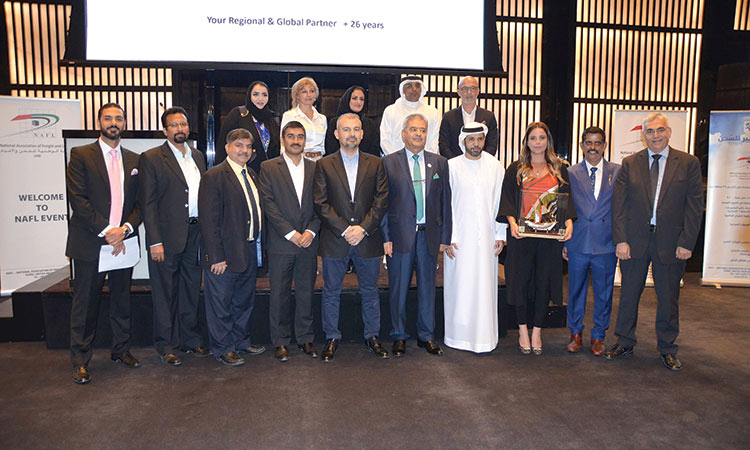 Officials during the AGM of National Association of Freight and Logistics in Dubai.

“Logistics business is in for a boom. Many projects are being built for Expo 2020 and Chinese investors are coming to Abu Dhabi and Dubai. There will be large logistics parks in Jebel Ali and one near the Expo venue. One is for food processing and the other is for manufacturing and exporting. There will be $4 billion (Dhs14.68 billion) investment by Chinese companies. Abu Dhabi will also have a huge logistics project that will boost the trading sector in the UAE,” said Nadia Abdul Aziz, President, NAFL and Vice President, Global Extended Board, the International Federation of Freight Forwarders Associations (FIATA).

Nadia Abdulaziz expressed her deep appreciation to Sheikh Ahmed Bin Saeed Al Maktoum, Chairman of Dubai Civil Aviation Authority, President of Dubai Airports, Chairman and CEO of Emirates Airline and Group, for his guidance and continuous support to the NAFL for realising its vision and and goals.

Addressing NAFL members during its Annual General Meeting (AGM) at Armani Hotel, Burj Khalifa, Nadia said the government is working to attract foreigners to come and invest, manufacture and export in order to boost trade which is contributing 30 per cent to Dubai’s GDP.

“NAFL continues to build government relations to always promote the industry and assist investors to come and invest in the UAE. More importantly, the Association’s mission is to raise the logistics service industry standards in the UAE,” she said.

“We are working to raise the industry standards, by training, networking, solving industry issues, by looking at opportunities to help the members, and by building platform for the members to market their companies. We also represent the UAE in international events and attract foreign direct investment (FDI) to the country,” she added.

NAFL’s strategy is to encourage young students to join this growing sector. In line with the UAE strategy, we will have sharper focus on empowering and training UAE nationals in this sector. As part of it, the Association offers scholarships for UAE nationals in the freight industry courses. The government is spending heavily on logistics and infrastructure sectors which have seen the second largest job growth after tourism.

About the industry, she said there is consolidation taking place in the logistics industry in the UAE, more e-commerce movements and distribution. “There are people buying companies, and joint ventures are taking place among shipping lines and freight forwarding companies,” said Nadia, who is also chairman for customs and trade facilitation of International Chambers of Commerce (ICC).

She advised NAFL members to avail the facilities offered by the UAE government offices and also by Dubai South, the 145 square kilometre purpose-built city that includes Al Maktoum International Airport.

Andrea Colo, Sales Manager, Dubai South, who addressed NAFL members, highlighted the incentives and packages being offered to logistics companies in the UAE and to NAFL members.

“We are offering an office space, admeasuring 60 sq metre, to operate from there and offering dual licensing, a facility to register a free zone company without any local sponsor. If they have a mainland company they can operate from the free zone, which means they need not have two companies. There is the possibility to combine all together under one roof, thus cutting the cost of running two companies,” he said.

“We are also offering three months grace period on the first year rent, which is almost 25 per cent discount. The rent can be paid in four instalments,” he added.

Roula Mezher, representative of Lebanese Forwarders Syndicate, said there is lot of business and trade between the UAE and Lebanon. She also called upon NAFL members to use Beirut as their hub to grab reconstruction business in Syria and Iraq. This business can be handled from the UAE as well as Lebanon in terms of logistics.

She also offered incentives to NAFL members to participate in the forthcoming international logistics conference RAME (Region Africa Middle East) 2019 in Beirut in 24-25 June, 2019. Middle East Airlines (MEA) is offering 20 per cent discount in ticket prices to Beirut. NAFL is taking a booth inside the exhibition hall, and local companies can promote themselves through NAFL stand, she said. The event will have promonenet speakers and will be under the patronage of His Excellency Prime Minister of Lebanon Saad Hariri.

The National Association of Freight and Logistics (NAFL), founded in Dubai in 1992, is the first national association of freight forwarders to be established in the Arabian Gulf to bring together the increasing number of freight and logistics service providers in the UAE. From a total of 24 members at the time of its inception, NAFL has now grown more than ten-fold with a current roster of about 390 members. 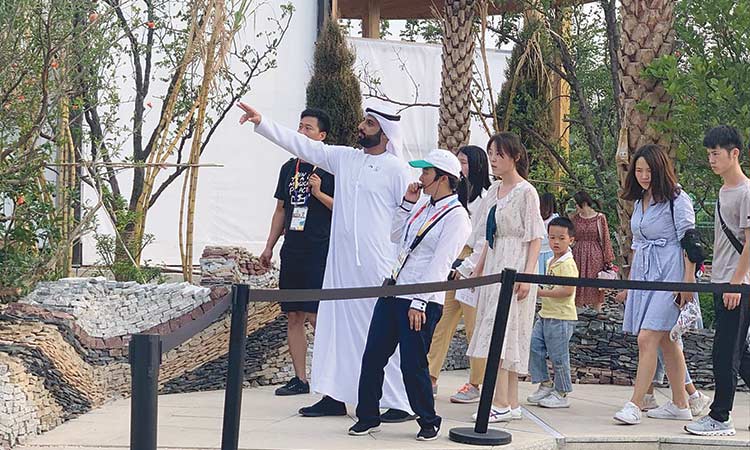 Emirates Foundation’s Takatof volunteering programme in partnership with the National Media Council has provided Emirati youth the opportunity to work on and represent the UAE at the UAE pavilion at the Expo 2019 for horticulture in Beijing.