Italy’s minibonds would either be illegal or useless: FM - GulfToday

Italy’s minibonds would either be illegal or useless: FM 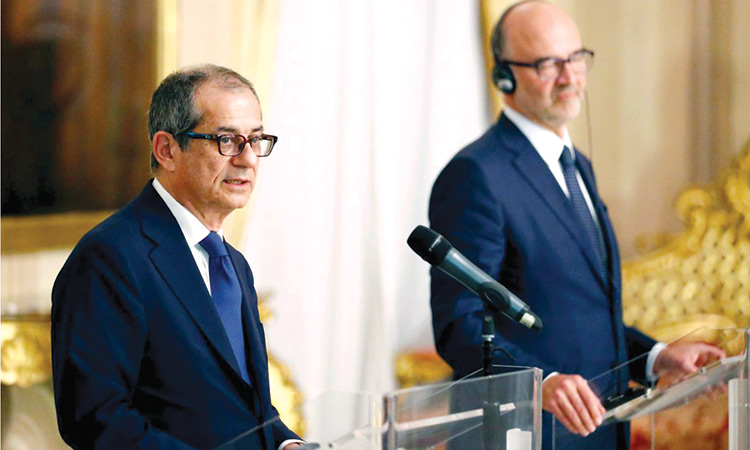 It would be either illegal or useless for Italy to issue bonds to pay its suppliers as such notes would break European currency rules or add to the country’s massive government debt, Italian finance minister (FM) Giovanni Tria said on Saturday.

Speaking on the sidelines of a G20 meeting in Japan, Tria sought to soothe fears about Italy’s public finances, which have unnerved investors and raised the threat of disciplinary action from the European Commission since an anti-austerity government took office a year ago.

Tria shot down the notion that the Italian state could pay its sizeable arrears with suppliers via small-denomination bearer bonds and dismissed talk of a debt restructuring or a wealth tax in the country.

The idea of issuing so-called mini-BOTS, named after Italy’s Treasury bills, was floated by the ruling League party and backed by parliament in a non-binding motion last week.

But Tria said these notes would either constitute new public debt, which would make Italy’s finances look even worse, or introduce a parallel currency, which is forbidden by European Union treaties regulating the euro.

“The economy ministry has already given a negative opinion,” Tria told Reuters and Italian news agency Ansa. “In one interpretation, the debt one, they are useless. In the other, they breach treaties and can’t be done,” he added.

Tria was echoing remarks made by the European Central Bank’s President Mario Draghi on Thursday.

Cabinet undersecretary Giancarlo Giorgetti of the League party said a day later mini-BOTS were “one of the possibilities” to help Italy clear its liabilities with suppliers.

Under EU rules, commercial arrears are not counted as public debt, which currently stands at around 130 per cent of the size of the country’s economy.

Some analysts have started to speculate about a restructuring of Italy’s public debt, whereby investors would see their bonds replaced with others of lower value or longer maturity.

Others, including Dutch central bank governor Klaas Knot, have raised the idea of a wealth tax to help fill Italy’s budget deficit, which is seen at 2.5 per cent this year by the European Commission.

Tria branded both “irresponsible” and said this year’s deficit will be contained by higher revenues and a lower-than-expected take-up for the government’s early-retirement and universal income schemes. “As there are fewer requests than expected, the savings will allow to obtain a lower deficit,” Tria said.

“This will also essentially come from higher non-tax revenues as well as higher tax revenues.”

Later on Wednesday the European Commission is expected to say that an EU disciplinary procedure against Italy over its growing debt is warranted, paving the way for a possible stricter monitoring of the country’s finances and financial sanctions.

The International Monetary Fund annual report on the eurozone will be presented by the fund’s managing director Christine Lagarde at a meeting of eurozone finance ministers on June 13, the source said. The main issues have been already discussed with eurozone representatives this week. The International Monetary Fund expects eurozone growth to pick up later this year, but forecasts major risks that could materialise in autumn. That would lead to a prolonged period of low growth and low inflation.

The fund sees high risks from eurozone countries with high debts that are not building sufficient buffers. Italy is considered the riskiest case, as the International Monetary Fund deems that the free-spending policies of its eurosceptic government represent a potential “major violation” of European Union fiscal rules, the source said.

If the EU commission and EU ministers agree with this assessment, Italy could face European Union financial sanctions as early as August.

The International Monetary Fund believes Italy’s debt is a major risk to the eurozone economy, together with global trade tensions and a hard Brexit, an EU source told Reuters on Wednesday ahead of a report the IMF will present next week. The so-called article IV report on the eurozone will be presented by IMF Managing Director Christine Lagarde at a meeting of eurozone finance ministers on June 13 in Luxembourg, the source said, adding that the main issues have been already discussed with eurozone representatives this week.

The Dubai real estate sector has witnessed an upward trend in the rental market in Q3, 2021, with an estimated 14% increase in affordable housing and up to 30% increase in luxury housing in selected areas.