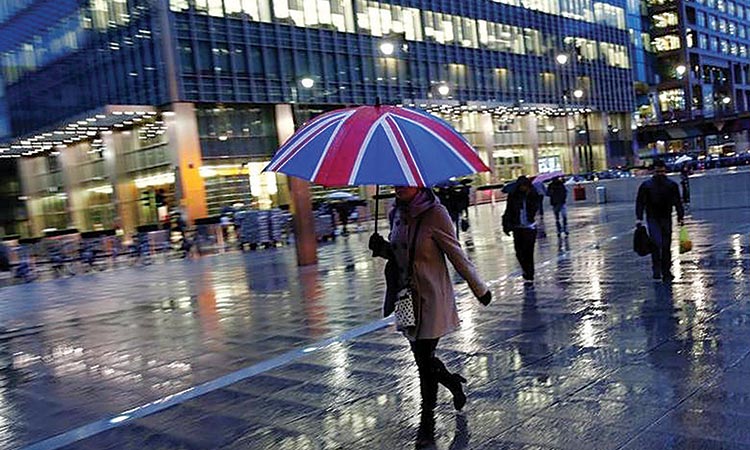 People walk in the rain at the Canary Wharf business district in London, Britain. Reuters

The IHS Markit/CIPS services Purchasing Managers’ Index (PMI) edged up to 51.0 from 50.4 in April, its strongest reading in three months and slightly above economists’ average forecast in a Reuters poll.

Equivalent surveys for manufacturing and construction published earlier this week unexpectedly fell deep into contractionary territory, and taken together the three PMIs gave one of their weakest readings since 2012.

A eurozone PMI was only slightly stronger, as businesses across Europe face challenges from the trade conflict between the United States and China as well as Brexit.

Official data showed Britain’s economy grew a robust 0.5 per cent in the first quarter of the year, though much of that was driven by firms stockpiling ahead of a Brexit deadline of March 29, which has since been postponed until Oct.31.

The Bank of England forecasts Britain’s quarterly economic growth rate will slow to 0.2 per cent for the three months to June.

There was no reaction to the data in financial markets. Investors think the BoE is more likely to cut rates than raise them over the coming year, despite it saying it expects borrowing costs to rise gradually if a Brexit deal can be done.

“Overall this points to positive but weak second-quarter growth, and a Monetary Policy Committee on hold until Brexit is resolved,” said Morgan Stanley economist Jacob Nell, who does not expect rates to rise until August 2020.

The PMI surveys do not cover the retail sector, which benefited from strong consumer demand in the first quarter. More recent signs have been less promising, though.

Car dealers reported a 4.6 per cent annual fall in sales for May earlier on Wednesday, and the British Retail Consortium said its members - mostly high-street chains - suffered a 2.7% drop in sales, the biggest fall in more than 20 years.

Many services firms in the PMI survey said Brexit worries continued to hurt sales in Europe, echoing a concern voiced by manufacturers on Monday.

“Domestic political uncertainty remained a key factor holding back their growth expectations for the year ahead,” IHS Markit said, adding that Brexit concerns were weighing on business investment and consumer spending.

Prime Minister Theresa May announced her resignation in May ahead of a heavy defeat for her Conservative Party in European Parliament elections, triggering a leadership contest that could open the way for a successor with a tougher line on Brexit.

Nonetheless, the survey found optimism among services firms rose to its highest since September 2017 and hiring was the strongest since November.

BoE officials have said that in an uncertain business environment, British firms tend to meet expansion needs by hiring staff − who can be easily sacked in a downturn − rather than make long-term investments that are costly to reverse.

Meanwhile the global stocks gained for a third straight day on Wednesday, bolstered by investors’ growing hopes that the Federal Reserve might cut interest rates this year to boost a slowing global economy, while the dollar languished near seven-week lows.

A flare-up in trade tensions between the United States and China, which busted investors’ assumption a deal was on the cards, has hit world stocks and triggered fears of an impending recession.

But recent comments from policymakers have helped stem the tide as top Federal Reserve officials this week began warning that the trade war may force them to respond, prompting investors to price possible interest rate cuts.

European markets opened flat to marginally higher, but most bourses barring Britain’s FTSE 100 registered gains of nearly 0.5 per cent by 1111 GMT. The pan-European STOXX 600 index was up 0.5 per cent.

Italian sovereign bond prices and bank stocks fell after the European Commission concluded that Italy is in breach of EU fiscal rules because of its growing debt, a situation that justifies the launch of a disciplinary procedure.

In bonds, Germany’s 10-year bond yield reached a record low and Italian debt held on to this week’s gains as investors ramped up their bets on a generous loan package for banks in the eurozone. In currencies, the Fed comments weakened the dollar for a fifth consecutive day, lifting the euro and pushing investors into safe-haven assets including the Japanese yen. The dollar struggled near a seven-week low. 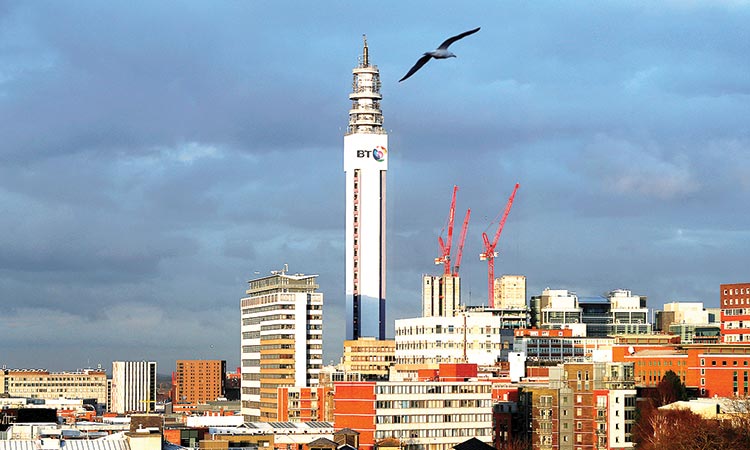