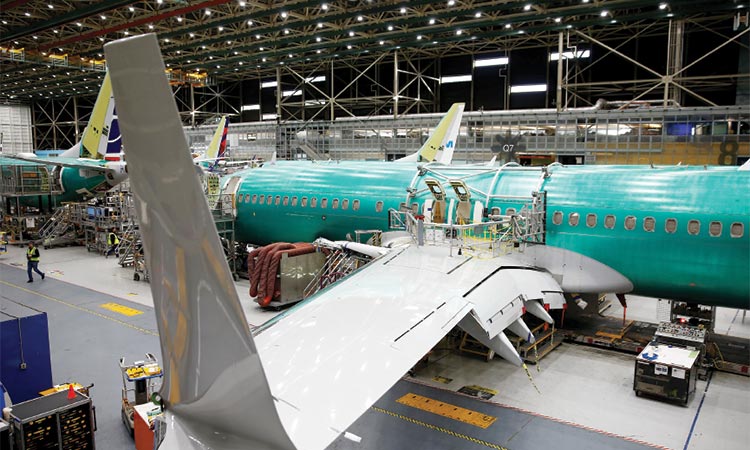 An aircraft is pictured at the Boeing factory in Renton, Washington, US. Reuters

The sixth-largest US carrier has 85 A321neo aircraft on order, of which it has already decided to convert 13 into a longer-range version called the A321LR for its planned launch of daily flights from New York and Boston to London in 2021.

But if the low-cost carrier decides to fly to other European cities such as Brussels or Amsterdam, it will need a plane with more stamina. It is studying the A321XLR, which Airbus has been promoting ahead of a formal product announcement in June.

“London is the biggest opportunity because it has the highest fares, but there would be other opportunities if we had an plane that had more range. The XLR gives us more range,” Hayes said on the sidelines of a global airlines meeting in Seoul.

“We’re still working through how many aircraft it would be (but) any XLRs would be linked to the planes we have on order today,” he told Reuters in an interview, adding any purchases would be converted from existing orders rather than generating completely new ones. No decision has yet been taken.

JetBlue is betting on its Mint business class product for narrowbody aircraft to succeed in the highly competitive premium transatlantic market. As of now, its US customers have to fly to London on rival carriers where business class seats can cost as much as $12,000.

In the United States, JetBlue has argued that its Mint seats have driven a 50 per cent decline in premium fares on some competing routes, and by sticking with narrowbody jets Hayes believes seats will be full.

US carriers like American Airlines Group Inc and United Airlines service London with widebody aircraft that Hayes said can be tough to fill during off-peak travel.

“The transatlantic market is very seasonal. In the summer you tend to do very well but in the winter you’re flying a bunch of empty seats, so the LR helps us manage significantly the risk of the winter because we’re not flying such an expensive plane.” A handful of Europe-based budget carriers have tried to penetrate the transatlantic market in recent years, but only cash-strapped Norwegian Air is still standing.

Hayes said he expects to work on code-share agreements with partners that have a strong presence in Europe, where the airline wants to eventually build up its brand.

A number of JetBlue’s 50 airline partners have already reached out, he said. Meanwhile, Portuguese private airline Hi Fly has bid for Thomas Cook’s airline business, a source familiar with the matter said on Monday, as the tour operator seeks to raise cash following its third profit warning in less than a year.

Thomas Cook put its airline up for sale in February, and Lufthansa, Virgin Atlantic and Indigo Partners are among the firms that have bid for part or all of the airline business.

The world’s oldest tour operator, Thomas Cook issued a profit warning last month, sending its shares to their lowest since November 2011 and its 2022 euro-denominated bonds to record lows.

US carriers like American Airlines Group Inc and United Airlines service London with widebody aircraft that Hayes said can be tough to fill during off-peak travel.

“The transatlantic market is very seasonal. In the summer you tend to do very well but in the winter you’re flying a bunch of empty seats, so the LR helps us manage significantly the risk of the winter because we’re not flying such an expensive plane.”

Thomas Cook said last month it had agreed a 300 million pound ($379 million) bank facility to provide more liquidity for the 2019/20 winter season to give it more breathing room.

The approach by Hi Fly for Thomas Cook’s airline unit was first reported by the Mail on Sunday. Hi Fly was not available for immediate comment.

Lisbon-based Hi Fly specialises in wet leases and charter services, according to its website. ($1 = 0.7923 pounds)

Judith Marks will become the CEO of Otis, the company said. Marks joined the company as president of Otis in 2017 from Siemens.

“I’m pleased to announce these most important assignments as we make strong progress toward our goal of establishing both Carrier and Otis as stand-alone public companies and clear leaders in their respective industries,” UTC Chief Executive Greg Hayes said.

The head of European planemaker Airbus called on Saturday for a “ceasefire” in a transatlantic trade war over aircraft subsidies, saying tit-for-tat tariffs on planes and other goods