SAA continues to strive to facilitate passengers’ journeys, provide the highest levels of service and improve the flow of traffic at the airport.

Since the beginning of the week, SAA has been implementing special procedures to coordinate with airport operators in order to ensure that all passengers will have a comfortable travel experience. During Eid holiday more than 250,000 passengers are expected to arrive to The Airport.

According to preliminary statistics, the passengers travelling through the airport on Friday and Saturday will include expatriate families travelling to their home countries and UAE families who plan to spend the vacation outside the UAE.

In order to avoid traffic, SAA has advised travellers to arrive at the airport early to check in, enjoy the airport’s services and shop at Duty Free.

SAA continues to strive to facilitate passengers’ journeys, provide the highest levels of service and improve the flow of traffic at the airport.

Meanwhile, Sharjah Airport Authority (SAA) recently rewarded the winners of the ‘Because We Care’ programme, which invites customers and passengers to provide feedback and suggestions about the Airport’s services and facilities. Launched in 2009, the programme is one of the Airport’s attempts to enhance the customer experience and ensure excellent service quality.

Alya Obaid Al Shamsi, Director of Marketing and Corporate Communications, presented the prizes – tickets provided by Air Arabia – in the presence of Ahmed Hassan Al-Hamoudi, Director of the Customer Service Department. The winners included Ibrahim Al Tonaiji and Jawaher Abdullah from the UAE and Ezzedine Mohammed from Syria.

Al Shamsi said, “With the cooperation of various departments at the Airport, Sharjah Airport has successfully developed the services and facilities it provides to customers and passengers based on the suggestions and valuable opinions received over the years.”

She added, “Our customer satisfaction program is one of our most important initiatives because it provides feedback about our performance and the quality of our services for airport users.” She also thanked Air Arabia, which has provided the prizes since the start of the programme, for contributing to the success and excellence of ‘Because We Care’.

SAA users can submit their suggestions via Sharjah Airport website (www.sharjahairport.ae), by filling out questionnaires in the Departures and Arrivals halls, via a mobile device that Airport employees use to interview customers, via the smartphone application or through social media sites.

The campaign will be carried out in 6 Ramadan tents, under the sponsorship of both zones as part of the campaign which is organized in cooperation with Sharjah Charity International and through coordination with the concerned parties in Sharjah Government.

The campaign is targeting provision of nearly 1,000,000 meals, around 33,000 daily meals, throughout the Holy Month of Ramadan. This comes as part of the efforts exerted by both zones to strengthen the meanings of charity and giving, as well as pursuing humanitarian and community involvement in conjunction with the Year of Tolerance.

Saud Salim Al Mazrouei, Director of Hamriyah Free Zone Authority and Sharjah Airport Free Zone, said: “The Holy Month of Ramadan is precious chance to reinforce our commitment toward Emirati community and strengthen our initiatives in this regard. We are always keen on opening new paths for contribution to improving the quality of people’s lives.”

“We managed to find those tracks through our partnership with Sharjah Charity International that resulted in launching this initiative, which is following the same approach of the late Sheikh Zayed Bin Sultan Al Nahyan,” he added.

“Sheikh Zayed represents an icon of giving and generosity. Thanks to his unforgettable achievements, the UAE now is ranking an advanced position in the field of humanitarian work among the world’s nations,” Al Mazrouei noted.

He pointed out that this Ramadan campaign reflects the commitment of both zones to enhancing the great values of the Holy Month of Ramadan, stressing that the ultimate goal of this campaign is to alleviate the suffering of a broad sector of the needy fasting people.

During the year 2020, the Sharjah Airport Authority continued implementing its ambitious plans and celebrated a number of achievements, including the completion of the East Expansion project, 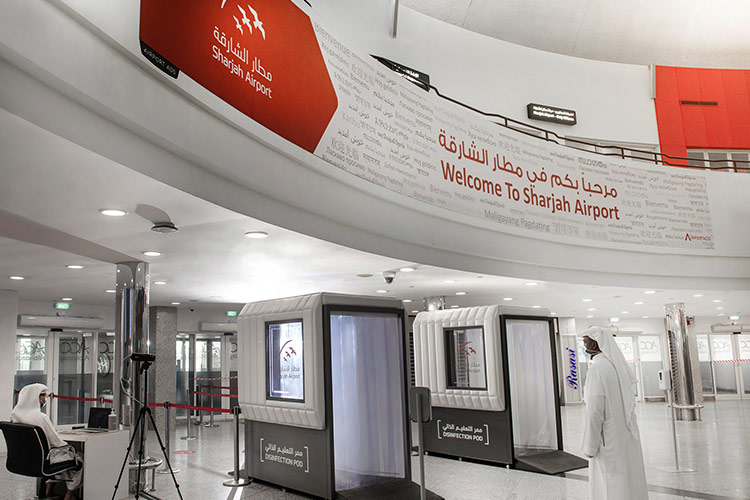 The airport ensures taking all precautionary measures in compliance with international standards, to guarantee the health and safety of travellers, customers and employees.