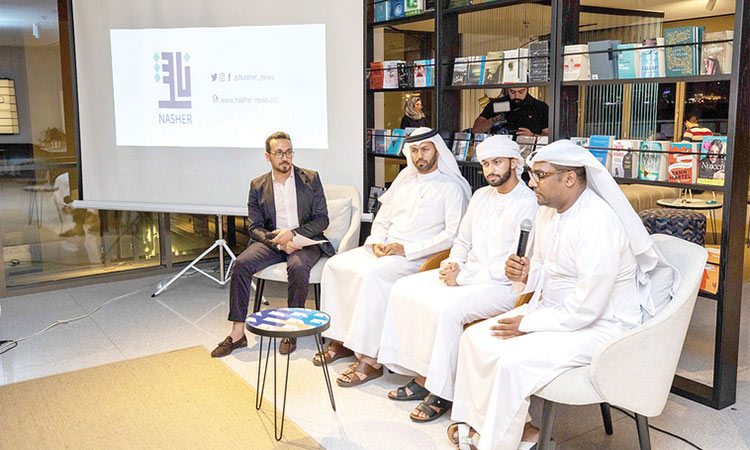 Officials during a session in Sharjah.

Business Bureau, Gulf Today
Nasher, the UAE’s first website dedicated to all matters related to the publishing industry, organised a Ramadan panel discussion ‘UAE Youth and Investment in the Publishing Sector’, to discuss the reality of publishing industry and the key role of Sharjah Publishing City Free Zone (SPCFZ) in supporting this sector.

During the session, Salim Omar Salim, highlighted that the UAE’s and Sharjah’s creative and culturally-rich environment offers a great breeding ground for the local publishing industry. He also mentioned the important role of Emirati publishers in ensuring the continuous growth of the sector.

“A study conducted by SPC reveals that the UAE’s publishing sector is expected to grow from $260 million to $650 million by 2030. This is a quantum leap by any measure,” said Salim.

“Also, Sharjah’s cultural and literary sectors, represented by both private and public entities have been attracting a sizeable number of youth in recent times – young professionals keen on shaping their careers around promoting our emirate’s cultural project, launched over 40 years ago by His Highness Dr. Sheikh  Sultan Bin Muhammad Al Qasimi, Supreme Council Member and Ruler of Sharjah, and Wife, Sheikha Jawaher Bint Mohammed Al Qasimi, Chairperson of the Supreme Council for Family Affairs (SCFA). Together, they have created an inspirational cultural environment for youth where they are encouraged to invest their talent the promoting our publishing sector,” he added.

The SPCFZ Director also noted that a shining example of the success of their efforts is Sharjah’s recent coronation as the UNESCO World Book Capital 2019.

Salim reiterated the role and eagerness of SPCFZ to boost the local publishing landscape through its cache of world-class services and business facilities, including 600 office spaces for industry professionals and a comprehensive package of incentives, which opens the way for them to achieve success and forge new partnerships with local and international players.

Jamal Al Shehhi, Founder of Dar Al Kuttab publishing house said that market fluctuations have a direct impact on all sectors, including publishing. However, due to the strongest buffer measures offered by entities like the Emirates Publishers Association (EPA), have ensured continued growth of the sector despite larger economic challenges. This, he said, has motivated the youth to invest in the industry.

He also highlighted that 70 per cent of the Arab publishing market is taken up by translated English titles, stressing this presents a key opportunity to reverse this practice by increasing the Arab market’s share in global publishing through the production of valuable Arabic language content and export it worldwide.

For his part, author Ali Al Marzouki, said he embarked on his journey in publishing after learning personally from many young authors about their hardships in trying to get published. This prompted him to start his publishing house after his first book was released.

He has strongly called on the youth to be more actively involved in Sharjah’s and the UAE’s cultural investments, taking advantage of government’s support for the sector in producing and translating quality content that can hold its ground when pitched against strong international competitors.

Under the MoU, EPA will encourage its member publishers to set up their businesses in SPCFZ, and SPCFZwill grants them 60 per cent off on rents of the flexi desks for two years from the lease’s start date. Effectively, the per sqm rates will go down to Dhs400.

SPCFZ will also provide EPA members discounts up to 48 per cent on leasing unfurnished offices, bringing the per sqm rates down from Dhs1,350 to Dhs700. Those who rent furnished offices will be offered a per sqm rate of Dhs900 – 42 per cent below the original value of Dhs1,550.

SPCFZ, an SBA subsidiary, is the first publishing and printing free zone in the world. It offers a plethora of attractive commercial perks including 100 per cent foreign ownership and profit expatriation along with a state-of-the-art infrastructure with fully-furnished office spaces, and other value additions like editorial support and print-on-demand services.