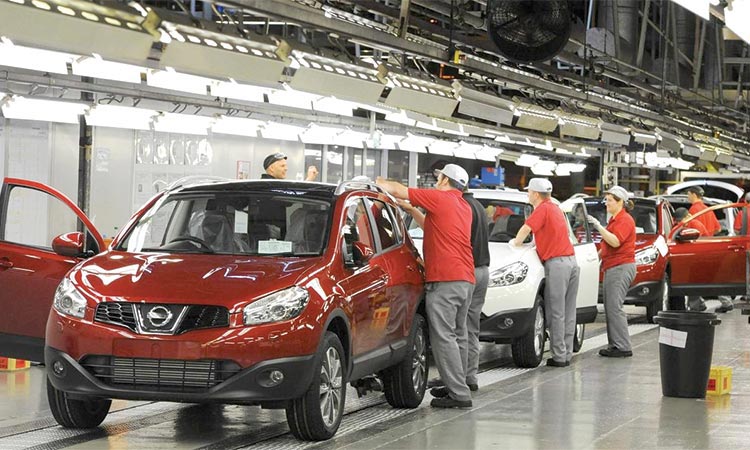 A worker is seen completing final checks on the production line at Nissan car plant in Sunderland, northern England. Reuters

Moody’s cut its rating on Nissan Motor Co by one notch on Friday, citing weak sales in the United States and casting a shadow on the Japanese automaker’s move to improve its business following a decline in its annual profit.

Nissan - hit by former Chairman Carlos Ghosn’s arrest last year and troubles at its North American business - reported a 45% plunge in annual operating profit in the year ending March, and forecast a 28% drop in profit this fiscal year. Moody’s cut its rating of Nissan’s credit to “A3” from “A2”, adding that the outlook was negative.

“The downgrade reflects the continuing slide in Nissan’s profitability, driven by weak sales in the US, its largest market,” Moody’s Vice President Motoki Yanase said in a statement.

While Nissan’s new strategy focuses on margin over unit sales growth and refreshing old models to improve its brand value, the ratings agency expects the overhaul will take “several years”.

“The negative outlook on Nissan reflects execution risk as Nissan implements its business strategies globally, reforms its corporate governance and stabilises its alliance with Renault,” it said.

Aurora is among dozens of automakers and large technology companies working on self-driving car systems, and has partnerships with Byton, Hyundai Motor Co and Volkswagen to develop and test self-driving systems.

With the notable exception of Elon Musk’s Tesla Inc, most automakers have said their self-driving cars will rely on lidar.