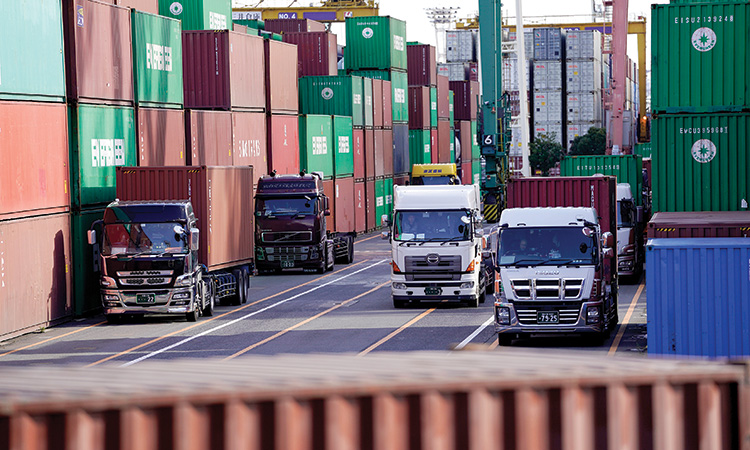 Container trucks at a port in Tokyo. Associated Press

Tokyo: Japanese exports fell for the fifth month in April in a sign of the growing economic strain exerted by the Sino-US trade war, but a pickup in business sentiment and machinery orders show companies remain optimistic about the future.

Worries about overseas demand and weak consumer spending could keep policymakers under pressure to forego a twice-delayed tax hike in October, although a rebound in manufacturers’ confidence may ease some fears of a recession in the world’s third-largest economy.

Highlighting uncertainty over the outlook, about two-thirds of companies expect growth to remain flat in the second quarter, while 82 per cent of firms believe Japan’s economy is not fully prepared for a planned tax hike, a Reuters monthly poll showed.

Investors are closely watching the government’s monthly report due later this week for a possible downgrading of its view that the economy is in a gradual recovery, which would rekindle speculation about a tax hike delay.

Ministry of Finance (MOF) data showed on Wednesday Japan’s exports fell 2.4 per cent in April from a year earlier, down for a fifth straight month. That compared with a 1.8 per cent drop seen by analysts in a Reuters poll.

However, data on capital expenditure offered more encouraging signs for the future. Core machinery orders, a highly volatile data series regarded as an indicator of capital spending in the coming six to nine months, rose 3.8 per cent in March, confounding expectations for a 0.7 per cent decline.

Furthermore, manufacturers surveyed by the Cabinet Office forecast core orders to jump 15.7 per cent in April-June after a 3.2 per cent decline in the previous quarter.

Easing concerns about the outlook, the Reuters Tankan poll, which tracks the Bank of Japan’s (BOJ) closely-watched tankan business survey, found the sentiment index for manufacturers rose to 12 in May, the first improvement in seven months.

The index is expected to rise further to 15 in August.

In Japan, the previous sales tax increase to 8 per cent from 5 per cent in April 2014 hit consumers hard and triggered a sharp economic slump.

Since then Abe has delayed the planned tax hike to 10 per cent twice as he prioritised economic growth over fiscal reforms, despite the industrial world’s heaviest public debt burden, which sits at twice the size of Japan’s $5 trillion economy.

Meanwhile the Japanese yen and the Swiss franc firmed on Wednesday as risk appetite remained weak in the backdrop of festering trade tensions between the United States and China.

While risky assets heaved a sigh of relief overnight after the United States eased trade restrictions on Chinese telecommunications equipment maker Huawei Technologies, the lack of a significant breakthrough has kept investors on edge. “We are still skeptical over a long-lasting recovery,” said Charalambos Pissouros, a senior markets analyst at JFD group.

“Before we get confident on that front, we would like to see concrete signs that both the US and China are truly willing find common ground.”