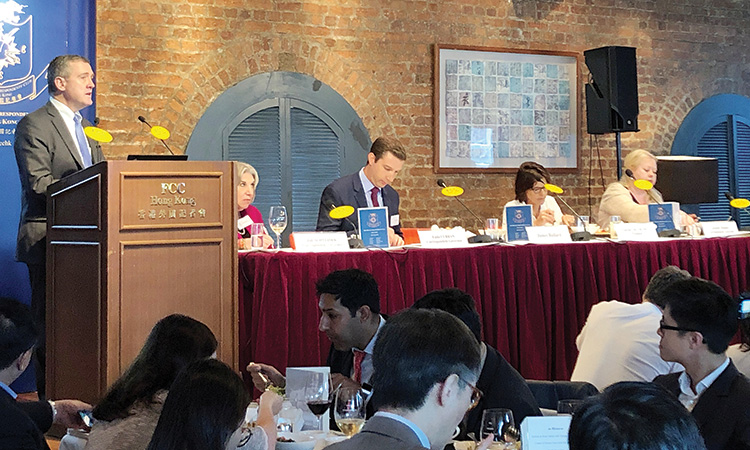 Further weakness in inflation could prompt the US Federal Reserve to cut interest rates, even if economic growth maintains its momentum, James Bullard, President of the Federal Reserve Bank of St. Louis, said on Wednesday.

The risk of the Fed missing its 2 per cent inflation target and the trade war were two key macroeconomic challenges to the policy-setting Federal Open Market Committee (FOMC), he said in a presentation prepared for an audience at the Foreign Correspondents’ Club (FCC) in Hong Kong.

The Fed held interest rates steady earlier in May, when Chairman Jerome Powell said there was “no strong case” for either a cut or hike in interest rates.

But Bullard said on Wednesday “a downward policy rate adjustment even with relatively good real economic performance may help maintain the credibility of the FOMC’s inflation target going forward.”

“A policy rate move of this sort may become a more attractive option if inflation data continue to disappoint,” he said.

Bullard and Chicago Fed’s Charles Evans, both voting members of the FOMC, have in recent days expressed concerns over the Fed’s failure to meet its target. Bullard said on Wednesday that another ‘low-side miss’ is on the horizon in 2019.

Bullard said any policy adjustment going forward would be in response to incoming data, and not a continuation of the rate normalisation process which has stopped earlier this year after 225 basis points worth of hikes from near zero levels.

He remained upbeat about growth prospects.

Bullard drew comparisons with 2-1/2 decades ago − when rates were increased by 300 basis points between early 1994 and early 1995, and the economy still boomed during the second half of the 1990s − to stress that rate normalisation can be accomplished without damaging prospects for an extended period of growth.

The next FOMC meeting will convene on June 18.

Bullard expects agreements on trade will be reached in the near term, but warned that a failure to do so, with substantial barriers “erected and maintained,” could alter “global trading patterns over the medium term”.

These unresolved trade disputes and the below-target inflation “suggest that the FOMC needs to tread carefully in order to help sustain the economic expansion,” he said.

Bullard said that from a macroeconomic perspective, China should agree to “everything that’s being asked” in the negotiations because it would lead to a domestic economic boom.

“They will establish credibility on trade inside China, and will reassure foreign investors that they can invest in China and be treated appropriately. If that occurs, I would see blue skies ahead for the Chinese economy,” Bullard said.

“It’s not just the US that’s doubting Chinese credibility. Many global players all around the world have found that it’s a difficult place to do business.” In an interview with Bloomberg TV earlier on Wednesday, Bullard said tariffs would have to stay on for “something like six months” with no prospect of a resolution in sight to weigh on Fed policy.

In his FCC remarks, he added China selling its large stock of US Treasuries was not “as big of a threat as it’s being made out to be” as it would be hard to replace them with other assets.

Meanwhile earlier Federal Reserve Chairman Jerome Powell was criticised by analysts and investors this week when he seemed to set aside concerns about weak US inflation, repeatedly describing its recent decline as temporary and dimming market expectations of an interest rate cut.

But in a series of statements and speeches since last fall, Powell, Fed Vice Chairman Richard Clarida and others have been consistent: The idea of preemptive “insurance“rate moves in either direction appear off the table for now, absent some unexpected event that raises new risks or shocks the economy into a higher or lower gear.

Just as they no longer feel the need to get “ahead of the curve,“and raise rates in plenty of time to prevent inflation from rising too fast in the future, neither do they feel the current US economy, with a 3.6 per cent unemployment rate and growth above its long-term trend, needs an extra push and lower borrowing costs from the US central bank.

Even after recent data showed core inflation, which excludes the impact of food and energy, at just 1.6 per cent, well below the Fed›s 2 per cent target, Clarida said on Friday the central bank remains “at or close to“its mandated goals of maximum employment and stable prices.

More important, he regarded expectations about future inflation as “stable,“a sign he thinks inflation is less likely to slip further.

“With the economy operating at or close to the Fed›s dual-mandate objectives... we can, I believe, afford to be data-dependent“and watch the flow of information for signs of change or developing risks, Clarida said in a speech at the Hoover Institution at Stanford University.