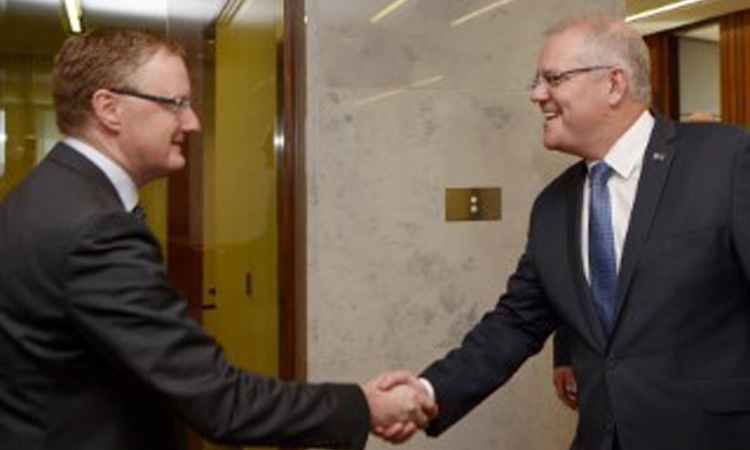 The meeting with Reserve Bank of Australia (RBA) Governor Phillip Lowe was part of a scheduled post-election briefing, but the talks took on greater significance amid a steep slowdown in the A$1.9 trillion ($1.31 trillion) economy.

Lowe on Tuesday said the RBA was considering cutting interest rates, the first cut in three years, to stimulate an economy slowing due to sluggish consumer spending and with lukewarm inflation. The RBA last eased policy to a record low 1.50% in August 2016.

Lowe called on the re-elected government to play its part in boosting household incomes, citing tax relief as a major remedy.

A source familiar with details of Tuesday’s meeting said the RBA governor briefed the prime minister on the state of the economy and global economic conditions. The source declined to be named as she is not authorised to talk to the media.

Australia’s domestic activity likely slowed in the three-months ended March to an annual 1.7%, the weakest since the 2008 global financial crisis.

Morrison, whose conservative coalition defied polls on Saturday to secure a third straight three-year term, made economic management the centrepiece of his re-election campaign. Australia has recorded 28 years of consecutive economic growth.

Morrison’s Liberal National coalition promised immediate tax cuts for 10 million middle- and low-income earners - worth up to A$1,080 ($746.28) per person, but his major policy now faces delays.

Vote counting and checking was unlikely to be finished in time for parliament to convene before the end of the financial year on June 30, when rebates were set to be issued once Australians filed their tax returns.

Australia’s crumbling housing market, where prices are down almost 10% from their 2017 highs, is also dragging on the economy.

Australia’s prudential regulator said on Tuesday it plans to relax some of the norms banks use to determine how much they can lend to customers, boosting expectations the move would boost borrowing.