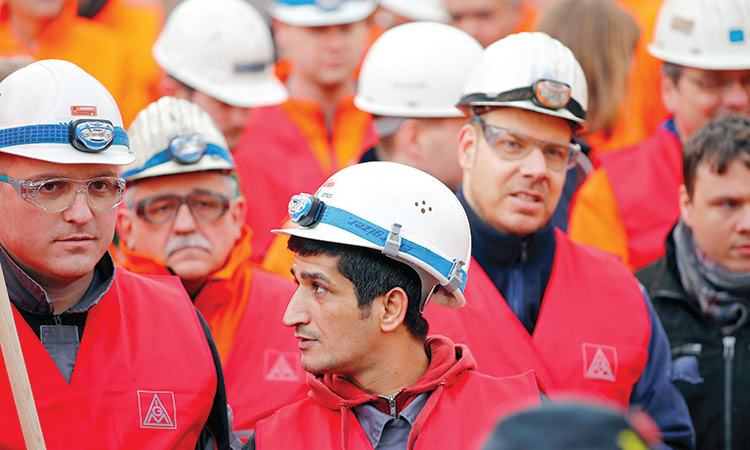 Employees of Thyssenkrupp at its plant in Dortmund, Germany. Reuters

When Thyssenkrupp CEO Guido Kerkhoff announced plans to list its prized elevators unit last week, he set off a battle for the conglomerate’s future that could test Germany’s brand of “social market” capitalism.

Kerkhoff had little choice but to think the unthinkable when the company’s share price sank to a 15-year low on May 8. The plan to take elevators public not only broke with long tradition but marked the abandonment of a turnaround plan he himself had unveiled less than eight months before.

Now Thyssenkrupp’s future is in play, with activist investors on the one side baying for a restructuring of the group to drive up value, and its top shareholder - the charitable Krupp foundation - and workers on the other side with a mandate to protect the unity of the company and jobs.

Kerkhoff’s strategy will not only decide the fate of his career, but also the shape of Thyssenkrupp - a poster child of Germany’s so-called Rhineland capitalism, which buttressed the country’s economic success by emphasising social policies to protect workers rights as much as the rules of free enterprise. Thyssenkrupp’s conglomerate structure has fallen out of favour in the market, reflected in the deterioration of its share price. Many investors say Kerkhoff and the non-profit foundation must move to reshape the group’s portfolio, including through spin-offs and divestments.

Ingo Speich, head of sustainability and corporate governance at top-20 shareholder Deka Investment, said this kind of active portfolio management was the likeliest and best solution for the group.

“Parts will be separated out and the resulting proceeds used to make acquisitions.”

Bankers and investors are now eyeing the prospect of finding new owners for the group’s sprawling businesses, ranging from steel and elevators to car parts and submarines.

Components Technology, which makes automotive parts, and Industrial Solutions, which makes chemical and cement plants, may be merged with sector peers in the medium to long-term, according to three financial sources familiar with the matter.

Elevators may end up in the hands of Kone or Schindler, should they intercept Thyssenkrupp’s IPO plans, while plant engineering could be combined with Linde’s engineering unit, one of the sources said.

Other investment bank pitches to potential buyers will focus on finding a partner for some of Thyssenkrupp’s automotive businesses, where Bosch, ZF Friedrichshafen, Nexteer or Mando are seen as potential players, according to the sources.

“This is the breakup of Thyssenkrupp,” said a senior banker who declined to be named due to the sensitivity of the matter.

All the companies either declined to comment on potential deals or were not immediately available to comment.

Kerkhoff has acknowledged that new ownership structures for its businesses is needed to turn the company around. But Thyssenkrupp declined to comment on any future asset sales.

Such a process will however be lengthy and difficult, according to three separate financial and labour sources, for two reasons: apart from elevators, all other units of Thyssenkrupp are less profitable than their peer average, are going through a restructuring or are in need of one.

This is reducing their value and makes it less probable that an M&A frenzy will ensue.

“I don’t see quick, easy wins unless assets are sold under value,” said another senior banker. “A fire sale is not the way forward.”

Secondly, powerful labour representatives at Thyssenkrupp, who control half of the seats on group’s 20-member supervisory board, are willing to oppose M&A that will result in further job cuts among its 161,000-strong workforce.

The 10 workers’ representatives can team up with the Alfried Krupp von Bohlen and Halbach Foundation, which holds a 21 per cent stake, to veto major changes.

The foundation’s mandate is to preserve the unity of the company while at the same time relying on healthy dividends to fund its non-profit activities for promoting the “common good”.

The elevator IPO, part of a plan that also includes 6,000 job reductions, has found support because it brings in cash that is badly needed to fix Thyssenkrupp’s balance sheet and strengthen the businesses as a whole.

“It will be a difficult path for the company and its employees. But we won’t abandon workers,” said Markus Grolms, vice chairman of Thyssenkrupp’s supervisory board and secretary at IG Metall, Germany’s biggest labour union.