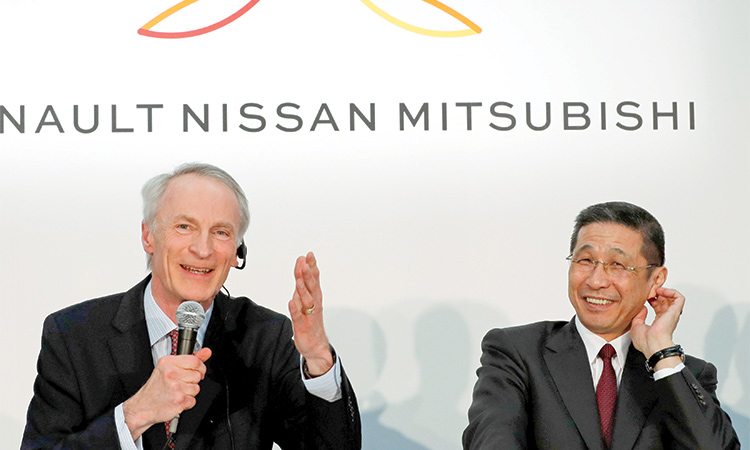 Jean-Dominique Senard and Hiroto Saikawa at a meeting in Yokohama. File/Reuters

Nissan Motor said on Friday that Hiroto Saikawa would stay on as chief executive, backing the protege of former boss Carlos Ghosn even as top shareholder Renault pushed for a change in the Japanese automaker’s leadership.

Saikawa’s re-appointment is likely to be seen as a rebuff to Renault, which has been pushing for leadership change at Nissan as a prelude to merger talks, sources at both companies have told Reuters. Saikawa - who has long opposed full integration - is seen as an obstacle to a tie-up, several people have told Reuters. Both the companies have decided to boost their relationship. Nissan’s lacklustre performance in the months since the dramatic ouster of Ghosn, following his arrest on charges of financial misconduct, has sparked concern at Renault.

Nissan also said that Renault Chief Executive Thierry Bollore will join its board, while Renault Chairman Jean-Dominique Senard will remain on the board.

The appointments will be presented for approval at a shareholder meeting in June.

There had been widespread speculation about Saikawa’s future and the make-up of the board after Nissan this week flagged a 28% drop in annual profit and slashed the dividend, underscoring its struggle to turn the page after Ghosn.

Nissan will also increase the number of board seats to 11 from eight, it said, seven of which will be outside directors.