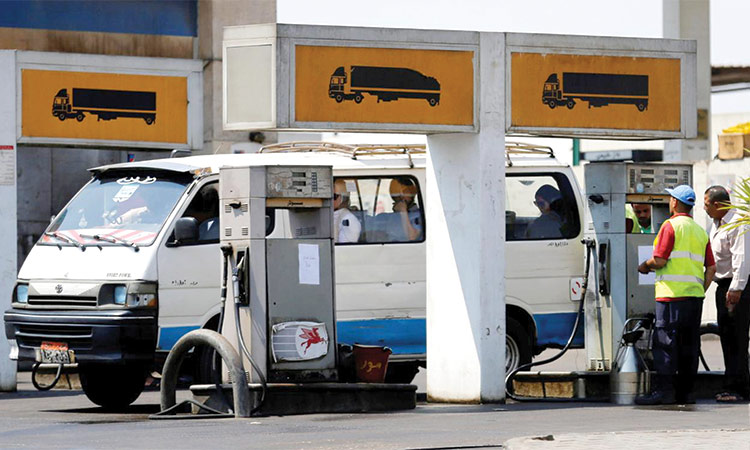 A microbus is filled up with fuel at a petrol station in Cairo, Egypt. Reuters

Egypt has been reducing fuel subsidies as part of an IMF-backed reform programme that began in 2016, and is due to remove subsidies on most energy products by June.

The government spent 84 billion Egyptian pounds on fuel subsidies in the first nine months of the 2017-2018 financial year. The financial year runs from July to June.

Egypt sold $1 billion worth of one-year dollar-denominated treasury bills at an average yield of 3.897 per cent, the central bank said.

The auction will be settled on Tuesday when dollar T-bills worth $1.1 billion are due to mature. The average yield of those bills was 3.298 per cent.

Meanwhile the Egypt has drafted a law to keep a tax on stock exchange transactions at 1.5 pounds per 1,000, cancelling an increase to 1.75 pounds per 1,000 that was due to take effect on June 1, the Finance Ministry said on Tuesday.

The ministry said in a statement that the proposed change was designed “to reduce the financial burden on traders and support the activity of the Egyptian stock exchange”.

Between 50 and 55 billion pounds will come from its Egyptian Refining Company, which will start operations in the third quarter of this year, Chairman Ahmed Heikal told Reuters. The refinery is expected to produce 2.4 million tonnes of diesel yearly, he said.

Summary The seasonally adjusted Emirates NBD Egypt Purchasing Managers’ Inded (PMI) - a composite indicator designed to give an accurate overview of operating conditions in the non-oil private sector economy - rose from 49.9 in March to 50.8 in April, signalling the first improvement in overall business conditions since August 2018. Furthermore, the PMI reading was the highest observed in over three-and-a-half years.

Concurrently, new orders saw a slight rise, as many firms reported higher sales and the securing of new contracts. This followed a marginal increase in March. Foreign sales continued to decline, albeit at a softer rate. Egyptian firms responded to favourable domestic demand by lifting input buying during April. In addition, employment levels grew for the first time in eight months. Backlogs saw only a slight increase, while lead times were broadly unchanged.

Output prices were still restrained in April, as the run of weak activity in recent months led some businesses to reduce selling charges to attract new customers. Overall selling prices have seen little change since last November, while input cost inflation remained weak. That said, cost burdens increased at a faster pace than in March, driven by higher fuel and electricity prices and a rise in living costs. Regarding future output, Egyptian companies were more positive in April on the back of an improving picture for the private sector. Some firms mentioned greater tourism and export markets as key reasons underpinning optimism. Output expectations were the second-strongest in 12 months.

International demand for Egyptian non-oil private sector output fell slightly at the start of the second quarter, but the pace of decline was the least marked in four months. Some firms noted a lack of new foreign contracts and a shift in focus towards domestic sales.

That said, others saw higher demand from new markets such as Italy, Turkey and Japan.