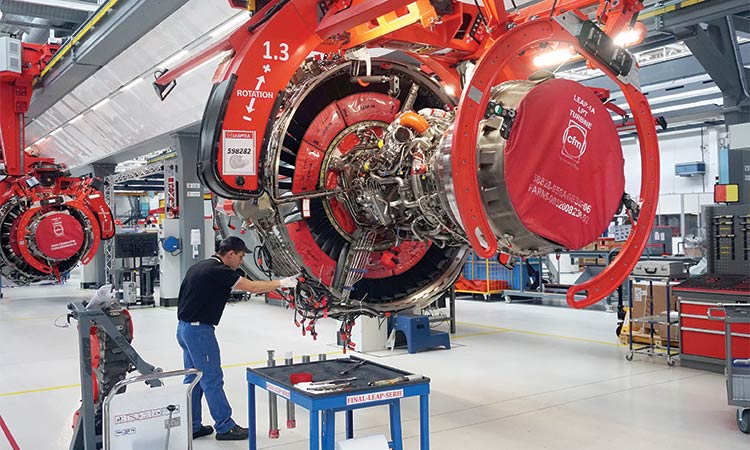 An employee at Safran’s facility in Villaroche, France. Reuters

French aero engine maker Safran outpaced revenue growth plans in the first quarter and stuck to its goals for the year despite the grounding of the Boeing 737 MAX, sending its shares higher on Friday.

Safran said its CFM International joint venture with General Electric continues to deliver LEAP engines to Boeing as it catches up on earlier engine production delays, but would adapt its output as necessary.

The disclosure suggests Safran is not yet facing a build-up in inventory of engines for narrow-body aircraft, allaying concerns among some analysts about a costly drain on its cash.

Safran shares rose more than 2 per cent after it posted quarterly underlying revenue up 12.6 per cent, outstripping the pace set by a 2019 like-for-like growth target of 5 per cent.

Boeing halted deliveries of the 737 MAX in March after regulators grounded the plane in the wake of two fatal accidents. It continues to produce the plane but at a slower rate of 42 airplanes per month instead of 52. Starting and stopping aircraft production lines is expensive. CFM has so far kept engine production at a rate consistent with Boeing’s previous output of 52 jets a month because the extra engines are being diverted to equip planes that had been left without engines at the Boeing plant due to earlier delays.

Safran Chief Executive Philppe Petitcolin said he expected this “recovery process” to be completed in May.

He did not say how CFM would respond after that, but industry sources say few decisions are expected until Boeing has at least a theoretical timetable for the ungrounding of the plane.