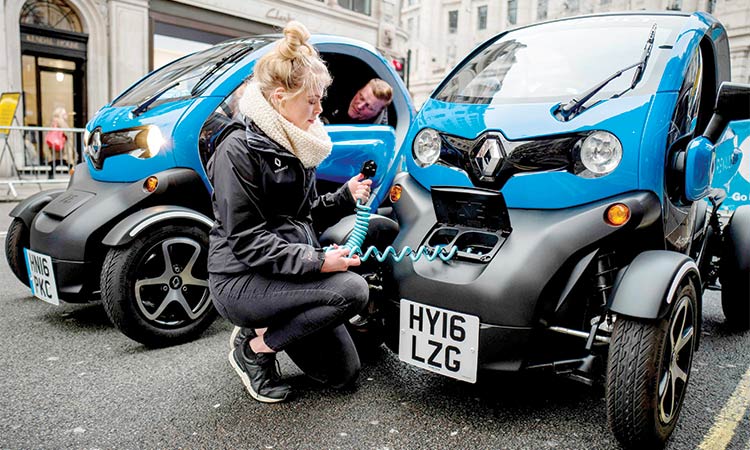 A staff member with a Renault Twizy in London. Agence France-Presse

Renault clung to full-year targets on Friday as it posted a 4.8 per cent drop in first-quarter revenue amid a decline in overseas sales and business with its alliance partner Nissan.

Revenue fell to 12.527 billion euros ($13.95 billion) for January-March as global delivery declined by 5.6 per cent to 908,348 vehicles, weighed down by Renault’s withdrawal from Iran last year.

The revenue figure fell slightly short of the 12.6 billion expected by analysts, based on the median of nine estimates in a poll by Infront Data. On a like-for-like basis excluding currency effects, the decline would have been 2.7 per cent.

Sales volumes were down in all regions outside Europe, where they rose 2 per cent.

“In this context, Renault outperformed the market,” Murguet said in a sales presentation to reporters and analysts.

Renault and its alliance with Nissan have been shaken by the ousting of former chairman and CEO Carlos Ghosn, who now awaits trial in Japan for alleged financial misconduct. At an operational level, Renault has also struggled with tightening emissions standards and a shift away from diesel.

Forthcoming model launches including a new Clio mini will lift sales later in 2019, Renault said, as it reiterated its full-year guidance.

Countering the exchange-rate setbacks, pricing improvements and a demand shift to pricier vehicles boosted revenue by a combined 1.3 per cent.

“Volumes were softer than expected, and price did not come close to offsetting the (currency) headwind in the quarter,” Citi analyst Raghav Gupta-Chaudhary said in a note.

Sales to partners had a negative 3.1 per cent revenue effect, as Nissan and Daimler bought fewer diesel engines and US sales of Renault-built Nissan SUVs dwindled.

Last year’s pullout from Iran under threat of US sanctions resulted in a 31 per cent decline for Renault’s Africa, Middle East and India sales region, the carmaker said. Excluding Iran, global deliveries would have fallen a more modest 1.7 per cent.

Sales volumes fell 5.3 per cent in the Americas region and 18 per cent in Asia-Pacific, including China.

Renault also cut its 2019 global auto market growth forecast to a negative 1.6 per cent from a previously stable outlook. The European market is expected to be broadly flat, providing a hard Brexit is avoided, the carmaker said.

Renault will propose to Nissan Motor a plan to create a joint holding company in which both firms would nominate a nearly equal number of directors, as the French automaker seeks further integration with its Japanese partner, the Nikkei newspaper reported on Friday.

Under the proposal, the holding company would be headquartered in a third country, the newspaper said, without citing sources.

Renault had made an earlier merger proposal that Nissan rejected on April 12, the newspaper said.

The outlook for the alliance between Renault and Nissan - one of the world’s top automaking partnerships - has been in focus since the arrest in November of its main architect, Carlos Ghosn, for financial misconduct.

The capital structure between the two automakers, in which Renault is the main shareholder of Nissan, has become an issue in past years, since Renault saved Nissan from the brink of bankruptcy two decades ago.

Meanwhile, former Nissan Chairman Carlos Ghosn walked out of a Japanese jail for a second time late on Thursday, freed on $4.5 million bail after agreeing to curbs on contacting his wife as he awaits trial on financial misconduct charges.

After a Tokyo court rejected an appeal by prosecutors against his release, Ghosn left the Tokyo detention centre around 10:22 p.m. (1322 GMT), dressed in a dark suit and white shirt with no necktie, a Reuters witness said.

A waiting Toyota Alphard van whisked him past the dozens of reporters, TV camera operators and photographers who had been waiting outside the detention centre since morning for a glimpse of the ex-executive after his latest three weeks in custody.

Ghosn’s second release on bail in as many months is the latest turn in a financial scandal that has rocked the global auto industry and exposed tensions in the automaking partnership between Nissan and France’s Renault SA.

When he was last released, the former executive traded in his usual tailored suit and chauffeured sedan for a disguise of a workman’s uniform, glasses and a mask to slip past reporters before being driven away in a modest compact van.