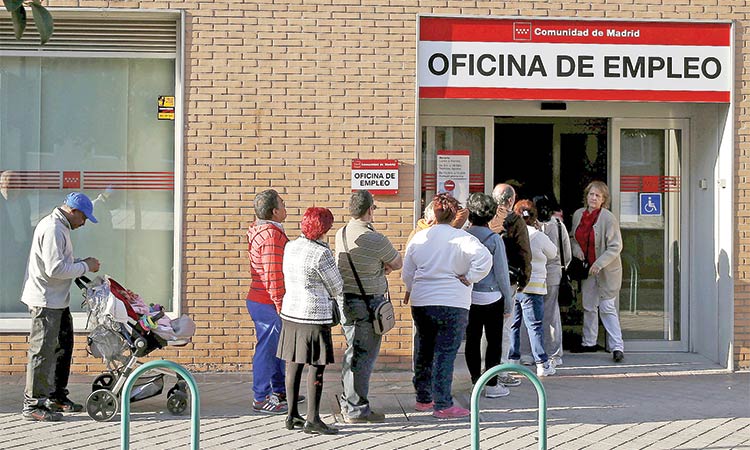 People stand in a line to enter a government employment office in Madrid. Reuters

Spain’s unemployment rate edged closer to 15 per cent in the first quarter as its services sector shrank, highlighting a persistent weak link in the economy days before a hotly contested national election.

With Spain’s recovery from recession entering its sixth year, economic issues have largely taken a back seat in campaigning for Sunday’s election. But its unemployment rate, which tends to rise at the beginning of the year as the festive holiday and shopping seasons wind down, remains the second highest in the European Union — and that unwelcome distinction resurfaced in a televised debate between party leaders on Tuesday.

Some 110,000 people were laid off in the first quarter in the service sector, which accounts for around half of economic output, the data from statistics agency INE showed.

Its headline figure, forecast to fall to 14.38 per cent in a Reuters poll, marked the first quarter-on-quarter rise since the beginning of last year. The total number of people out of work rose by 49,900 to 3.35 million, the largest quarterly increase in six years. Spain’s jobs market is highly reliant on seasonal factors such as tourism, worth around 12 per cent of gross domestic product, and agriculture, and many temporary jobs in those sectors are cash-in-hand.

Employment increased in agriculture in the first quarter and remained largely unchanged in industry and construction, INE said.