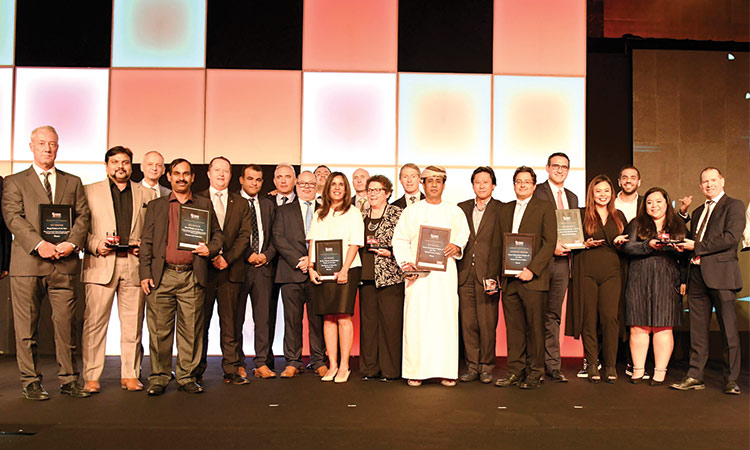 The winners of MEED Projects Awards 2019.

Business Bureau, Gulf Today
The Gulf region’s best projects have been revealed as winners during 2019 MEED Projects Awards, which were held in association with Mashreq.

The only awards programme recognising excellence for completed projects in the GCC, MEED Projects Awards honoured national winners from the United Arab Emirates (UAE) Kingdom of Bahrain, Kuwait, Sultanate of Oman, and Kingdom of Saudi Arabia (KSA) in ceremonies held at a local hotel in Dubai on Thursday evening.

UAE had the most regional winners with seven, followed by Oman with four. Saudi and Bahrain had three winners each, while Kuwait had one regional awardee.

“We are honoured to be a partner with MEED in recognising projects excellence in the GCC. This is our way of putting a spotlight on these projects for not only upholding quality standards, but also in improving the standard of living in the Gulf through their invariable impact on the socio-economic aspirations of the region,” said Mohammad Khader Al Shouli, Senior Vice President, Head of Contracting Finance at Mashreq Bank, headline sponsor of the awards programme.

The 2019 MEED Quality Project of the Year, in association with Mashreq, the award programme’s highly coveted honour, was given to KSA’s Haramain High Speed Railway Project (entered by Saudi Railways Organization and owned by the Government of KSA). It also won the GCC Transport Project of the Year award.

The judges praised the project’s efforts to maximise social impact and the efficient design of departure and arrivals lounges improving passenger flow and comfort and which are also low energy with innovative prismatic daylight collectors on the roofs.

The other KSA winner was the Titanium Sponge Plant Project in Yanbu Project (entered by a Joint Venture of Chiyoda Corporation and CTCI Corporation and owned by Advanced Metal Industries Cluster and Toho Titanium Metal Company Limited) which was awarded the GCC Industrial Project of the Year.

From Bahrain, the projects which gained regional recognition was Madinat Salman Sewage Treatment Works, Long Sea Outfall & Irrigation Network which receive the GCC Water Project of the Year, GCC Engineering Project of the Year and the Sustainability Medal (sponsored by China State Construction).

Kuwait’s regional winner was The Ministry of Education Headquarters Project which received the GCC Social, Culture and Heritage of the Year award.

It may be mentioned that MEED is a senior management media brand that encompasses a subscription website and magazine, more than 30 C-level executive conferences and summits hosted by MEED Events, the MEED Quality Awards for Projects and two high-value content businesses, MEED Projects and MEED Insight. MEED Projects is the Middle East’s premium project tracking database and MEED Insight offers tailored research and in-depth analysis.

Established in 1957, MEED, has been integral to delivering business information and news, intelligence and analysis on the Middle East economies and activities ever since. Attracting a key senior management audience through its content and activities, MEED is a media brand and publication that covers a spectrum of services that inform.