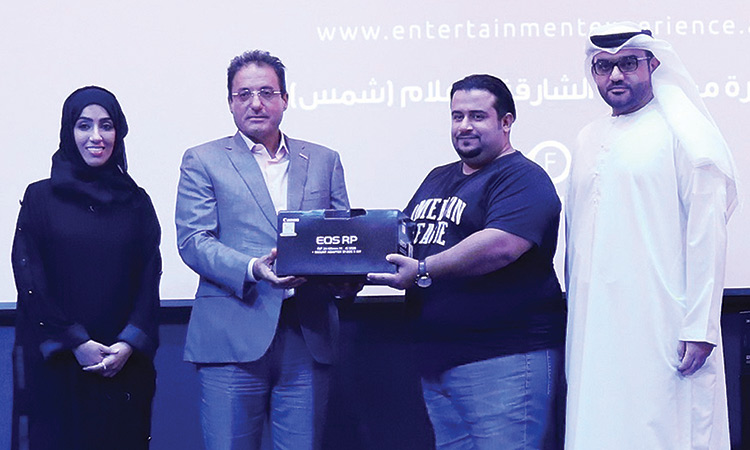 Business Bureau, Gulf Today
Director Nahla Al Fahad, member of the UAE Entertainment Experience dream team, led a workshop on the basic principles and techniques of filmmaking. She answered all the questions related to the making of the first ever crowdsourced film in the UAE.

He commended the success of the first and second workshops which focused on scriptwriting and filmmaking, respectively. He said: “No doubt that directing a film is a dream for aspiring filmmakers. We know that there are tricks and secrets behind the magic of filmmaking in addition to the other secret which is creativity”.

Before the workshop, MAG Group Holding “UAE Entertainment Experience Gold Sponsor” distributed cameras to the participating teams in the UAE Entertainment Experience, the first of its kind film production project in the Arab World, in the presence of Shihab Al Hammadi, Director of Sharjah Media City (Shams), Moafaq Al Gaddah, Chairman of MAG Group, in addition to local and regional media representatives.

This initiative from MAG Group is aimed at supporting Sharjah Media City’s efforts in developing the film industry infrastructure in all creative and technical areas of film production and in creating a favorable environment for the media and creativity. Such efforts will help enhance the Emirate’s reputation in the media and creative fields by highlighting local content regionally and globally.