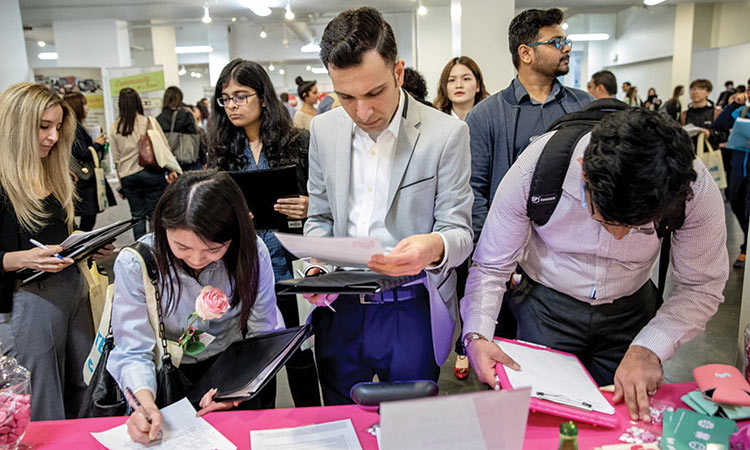 The ITC report is a crucial step in the push for Congress to consider ratification of the US-Mexico-Canada Agreement, signed by President Donald Trump and the leaders of the other two countries last year to replace the 25-year-old North American Free Trade Agreement.

The report estimates that US real gross domestic product would increase by 0.35 per cent, or $68.5 billion, on an annual basis compared to a NAFTA baseline, and would add 176,000 US jobs, while raising US exports.

The ITC›s estimates are for year six of the trade deal, once it is fully implemented.

The trade deal›s success or failure in Congress could be determined by how it is expected to affect the US auto industry, a sector that steadily drained jobs to Mexico under NAFTA. The USMCA deal contains much tighter regional content rules, requiring that 75 per cent of a vehicle›s value be sourced in North American versus 62.5 per cent currently, and 40-45 per cent produced in high-wage areas, namely the United States and Canada.

Auto industry employment would rise by 30,000 jobs for parts and engine production, but US vehicle assembly would decline. US vehicle prices would rise up to 1.6 per cent, causing consumption to fall by 140,000 units per year, or about 1.25 per cent of 2017 sales, the report said.

The report overall was more positive than initially anticipated by economists, who said the traditional economic models used by the ITC to measure previous trade deals would result in minimal gains for the United States.

White House economic adviser Kevin Hassett told Reuters that he was pleasantly surprised by the results, which used different modeling methods that he called «accurate and well done.» «Their estimate is a lot closer to what we think USMCA will do than I expected,» Hassett in a telephone interview. «This is very strong argument for passing the USMCA.» The US Trade Representative›s office had prepared a separate analysis of the USMCA›s automotive benefits that was described as a rosier «alternative analysis» aimed at limiting any potential damage from the ITC report.

USTR estimated that the trade deal would create 76,000 automotive sector jobs within five years as automakers invest some $34 billion in new plants to comply with the pact›s regional content rules. The total includes about $15 billion in projects already announced.

USTR officials said their analysis was based on plans disclosed by automakers to the trade agency for compliance with the new agreement›s tighter rules of origin.

«They have verbally committed to us that they intend to comply with the rules,» a senior USTR official said. «And they have told us that this is not going to have significant upward pressure on vehicle prices.» But the ITC report said some automakers may decide not to offer vehicles that would be too expensive to bring into compliance with the deal, reducing consumer choice in the US auto market.

Discrepancies between the two reports could provide ammunition for lawmakers to oppose USMCA.

Democrats, who control the House of Representatives, have greeted the trade deal coolly due to concerns about the enforceability of new labour provisions that aim to drive up wages in Mexico and concerns that data protections for biologic drug makers could drive up health care costs.

The ITC report said Mexican union wages would rise by 17.2 per cent if the labour provisions agreed in the USMCA are enforced. Even so, Mexican factory wages remain far lower than those in the United States.

The deal will lead to new access for US exports of dairy, poultry and egg products to Canada and US imports of sugar and sugar-containing products from Canada, the ITC said. USTR touted the dairy and poultry sectors as key beneficiaries of the deal when it was announced last year.

Senator Chuck Grassley, a Republican from Iowa, a top farming state, who chairs the Senate Finance Committee, praised the report for recognizing the deal›s benefits.

«Many of the significant improvements in USMCA are reducing non-tariff barriers and implementing rules and fair practices that will help US workers, jobs and businesses tremendously over the coming years,» Grassley said in an emailed statement.

The US trade deficit in February fell to its lowest level in eight months, thanks in part to rising aircraft and auto exports, according to government data recently. The trade deficit -- which fell for the second month in a row after hitting a 10-year high in December -- also was helped by record exports of US services, according to the Commerce Department.