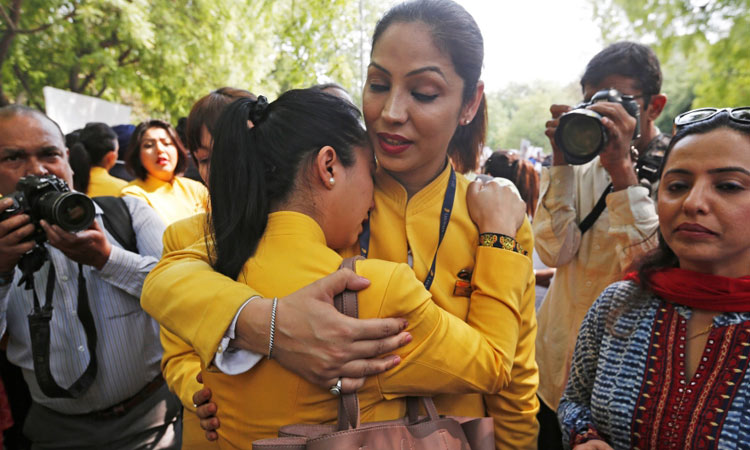 An employee of Jet Airways is consoled by her colleagues during a protest in New Delhi on Thursday. Adnan Abidi / Reuters

Jet Airways shares plunged more than 32 per cent on Thursday, hours after the Indian carrier's final flight landed following a decision to ground its entire fleet.

The Mumbai-based carrier is on the edge of bankruptcy and has failed to secure emergency funding from banks, forcing it to suspend all operations late on Wednesday.

Jet's stock fell more than 32 per cent to 162.15 rupees on the Bombay Stock Exchange on Thursday. It was worth more than four times that a year ago.

The lenders that control the airline said they were focusing on finding a buyer for Jet, which was until recently India's second-biggest carrier by market share.

"Lenders are reasonably hopeful that the bid process is likely to be successful in determining fair value of the enterprise in a transparent manner," they said in a statement. 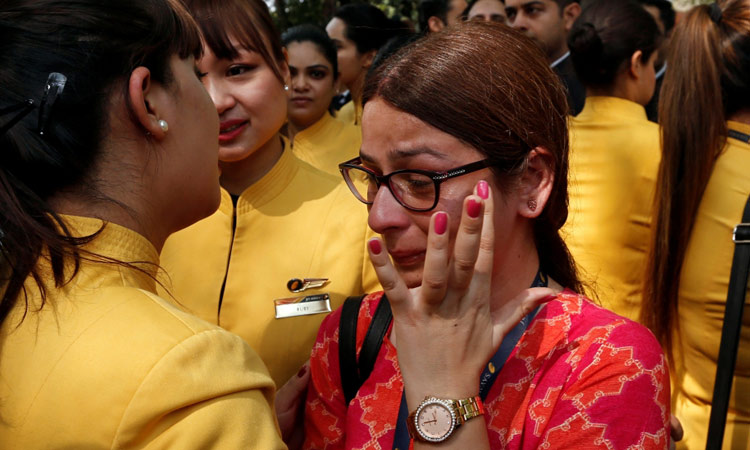 An employee of Jet Airways is consoled by her colleagues during a protest in New Delhi on Thursday. Reuters

The State Bank of India-led consortium is looking to sell a controlling stake in Jet and has shortlisted four potential buyers, including Etihad Airways, which already owns 24 per cent.

The four have until May 10 to submit formal bids.

But until then, the carrier's remaining fleet is grounded, with a final flight from Amritsar to Mumbai landing in the early hours of Thursday.

"What's the management doing and why isn't the government doing anything to save our jobs?" said Sarvesh, an employee of Jet's ground staff who did not want to give his surname.

"Many here have been working for Jet for over 20 years. Our families are going to suffer," he added.

Zoya Khan, a 23-year-old flight attendant, said she was "extremely concerned" about her future.

"This is my first job," she told AFP. "We just want the management and the government to figure out a solution."

A collapse of Jet, and the loss of more than 20,000 jobs, would deal a blow to Prime Minister Narendra Modi's pro-business reputation as he seeks a second term in ongoing national elections.

The chairman of state-carrier Air India, which has been bailed out by the government several times, said Jet's temporary closure was a setback for India's aviation sector.

"We have in the past witnessed many airlines shutting shop and it is time to appreciate that the razor thin margins which airlines are forced to operate with in a competitive environment results in a scenario that encourages unsustainability," Ashwani Lohani said in a Facebook post.

Jet, which has debts of more than $1 billion, has been in a tailspin for months. It has defaulted on loans and failed to pay many staff since the start of the year.

The carrier cancelled hundreds of flights in recent weeks, stranding thousands of passengers. It was operating just five planes before Wednesday's grounding, down from 120 last year.

Its plight has been compared to that of Kingfisher Airlines, which ceased operations in 2012 before later going bust, causing thousands of job losses and huge financial costs to lenders.