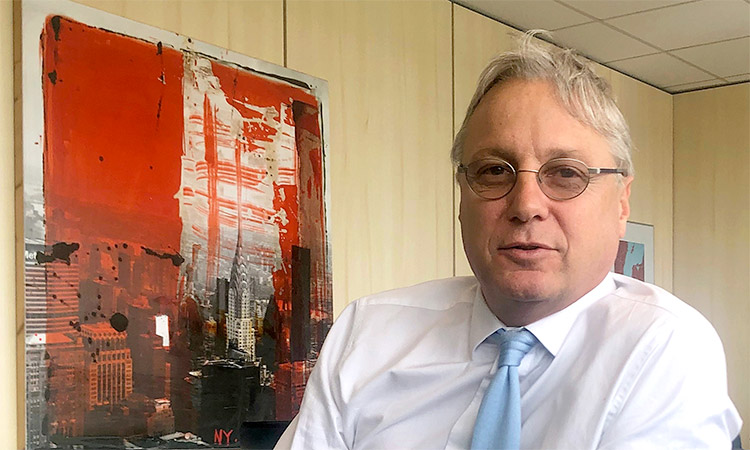 Christian Scherer speaks during an interview in Toulouse, France. Reuters

We are selling increased range on the A321. People are telling us this is a great module, give me more range. (We say) we will give you the maximum range we can on the A321: how many would you like? That is what we are doing,» he said in his first substantial interview in his new role.

Scherer›s remarks are the strongest indication yet that Airbus has quietly launched the A321XLR, a keenly awaited new version of its single-aisle plane that competes with the 737 MAX and could brush up against a proposed new Boeing mid-market jet.

Airbus and Boeing compete ferociously for sales of single aisle jets like the MAX and A320 or A321 and the effort to expand Airbus› lead in the market for its cash cow predates last month›s grounding of the 737 MAX following two crashes.

«I am certainly not encouraging any sort of behaviour to try and exploit this situation, because this is out of bounds,» he said of Airbus, which has limited potential to increase output.

Sources also say Airbus is worried about a regulatory backlash over the 737 MAX crisis.

Separately, sources say Airbus has already signed up customers for the A321XLR, which is being developed at a cost of several hundred million dollars although its launch has not yet been formally announced.

The two planemakers have been raising production to serve record air travel, though Boeing has dropped back from 52 to 42 such planes a month due to the MAX crisis.

Airbus plans to increase single-aisle output from 57 to 63 a month from next year but recently halted plans to go as high as 70 due to objections from overstretched engine makers.

Industrial issues aside, Scherer cited demand beyond 63 jets a month. Asked if the market could absorb 70, he said: «That number has been used before and I see the logic of it.» The suggestion is likely to worry leasing companies and engine makers who have urged restraint on jetmakers trying to make good on a seven-year waiting list of unfilled orders.

The situation is different in wide-body jets where Airbus has been outsold three to one by Boeing for two years. Scherer pointed towards future sales of the A330neo, a 250-300-seater that has been struggling to make a mark against Boeing›s 787.

I’ll take a bet that in a year from now there will be no doubts about the A330,» he said.

Scherer, whose father flew in the first ever Airbus test flight as an engineer, became head of sales in September after a career in sales contracts, strategy, defence and turboprops.

As head of strategy he was closely associated with the 2010 launch of the re-engined Airbus A320neo, which precipitated Boeing›s decision to drop plans for an all-new jet and launch the 737 MAX, as well as with moves to open a US A320 plant.

Urbane and multilingual, Scherer›s style contrasts with that of long-serving sales chief John Leahy who dominated aviation for 25 years with a dizzying pursuit of higher market share as he dragged Airbus from upstart to Boeing›s commercial equal.

«We will defend where we are. But as I look into the future it›s a different kind of chessboard than when Airbus had to lift itself from a 20 per cent market share to 50,» Scherer said.

Market share is one yardstick but «it is not our business objective,» he added. «It is not how I measure if I had a good day, it is do I have the confidence of customers, am I making money, am I controlling costs?» Investors monitor such language because market-share battles have tended in the past to conflict with higher profit margins.

Scherer is up against a relentless dealmaker in Boeing sales chief Ihssane Mounir, who snatched the orders crown last year, while Airbus had a negative first quarter on orders due to cancellations.

Analysts say Scherer is picking market battles but will come under some pressure to sustain orders. He must also respond to Boeing proposals for a New Mid-sized Airplane (NMA) between the A321neo and A330neo, though he insists Boeing›s plan won›t work.

How that battles plays out could affect choices and timing of the next generation of single-aisle jets like the MAX and A321neo from 2030, which is beginning to influence strategies.

The head of European planemaker Airbus called on Saturday for a “ceasefire” in a transatlantic trade war over aircraft subsidies, saying tit-for-tat tariffs on planes and other goods