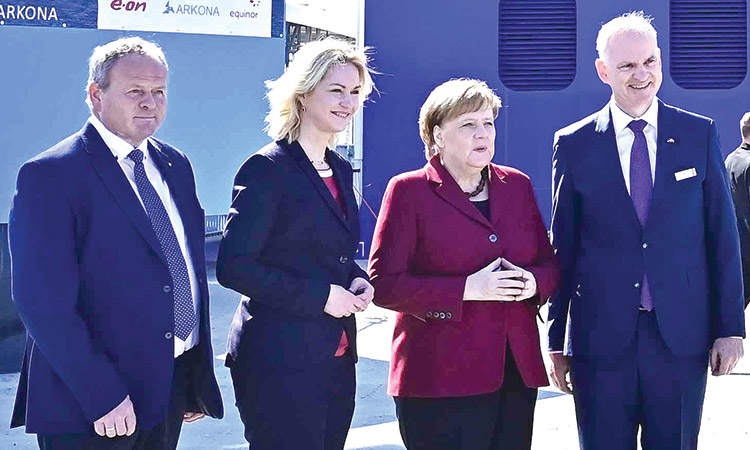 Angela Merkel and other top officials in Sassnitz, northern Germany on Tuesday.

The German government is expected to slash its 2019 growth forecast later this week as exporters struggle with weaker demand from abroad, trade tensions triggered by US President Donald Trump’s “America First” policies and Brexit uncertainty.

ZEW President Achim Wambach said the slight improvement in economic sentiment was largely based on the hope that the global economy would develop less poorly than previously assumed.

A closely-watched measure of investor confidence in Germany has clambered back into positive territory, data showed Tuesday, pointing to a brighter outlook ahead even as views of the present situation grew gloomier.

The ZEW institute’s barometer added 6.7 points for a reading of 3.1 in April, it said after its regular monthly polling of around 200 financial players and analysts.

It was the first positive reading for the indicator in just over a year, a period in which threats to growth like Brexit, trade wars and weakness in emerging markets have plagued investors.

The uptick “is based above all on hope that the global economic context will develop less badly than previously supposed,” ZEW chief Achim Wambach said in a statement.

“A contribution to the improved expectations will have come from the delay to the date of Brexit” to October 31 at a European summit last week, he added.

Export-oriented Germany has suffered from a global trade slowdown and uncertainty over possible new barriers to trade with major markets in Britain and United States.

Brexit could create new hurdles where trade with the island nation has so far been frictionless.

And US President Donald Trump has threatened taxes on imports of European cars if his own trade demands are not met.

Looking at other elements of the ZEW survey, respondents’ expectations for the 19-nation eurozone also pushed into the positive, adding 7.0 points for a reading of 4.5.

But financial players’ view of the present state of both the German and eurozone economies worsened. “The latest figures for new orders and production in German industry produce a picture of rather weak development in the business situation,” Wambach said.

Meanwhile Angela Merkel opens another massive wind farm by E.ON, the Arkona wind park, in the Baltic Sea, a key project for her country’s “energy transition”.

The German Chancellor Angela Merkel joined by French and Norwegian ministers on Tuesday to officially open a massive wind farm in the Baltic Sea, a key project for her country’s “energy transition”.

Electricity will be routed through a French-built substation whose 150 kilometres of cables link up the wind generators.

Engineers affectionately dubbed the hardware “the multi-socket adaptor” after the familiar household gadget.

Angela Merkel, Chairman of the Board of Management of E.ON Johannes Teyssen, Manuela Schwesig Minister President of Mecklenburg-Vorpommern were present for the event in Sassnitz, northern Germany.

The recent German data has painted a mixed picture of the economy. Industrial orders tumbled and manufacturing output stagnated in February while construction boomed and retail sales rose more than expected in the same month.

Chancellor Angela Merkel’s government will update its growth forecasts for this year and next on Wednesday. A government source said that the Economy Minister Peter Altmaier will halve the estimate for 2019 to 0.5 per cent, lower than a recent estimate of 0.8 per cent by Germany’s leading economic institutes. The government’s last forecast in January was for 1 per cent growth in 2019.

German Economy Minister Peter Altmaier is widely expected to present on Wednesday updates that further reduce the forecasts for 2019 economic growth, after a drastic 0.8-point cut in January to just 1.0 per cent.

“The postponement of the Brexit deadline may also have contributed to buoy the economic outlook,” Wambach said. 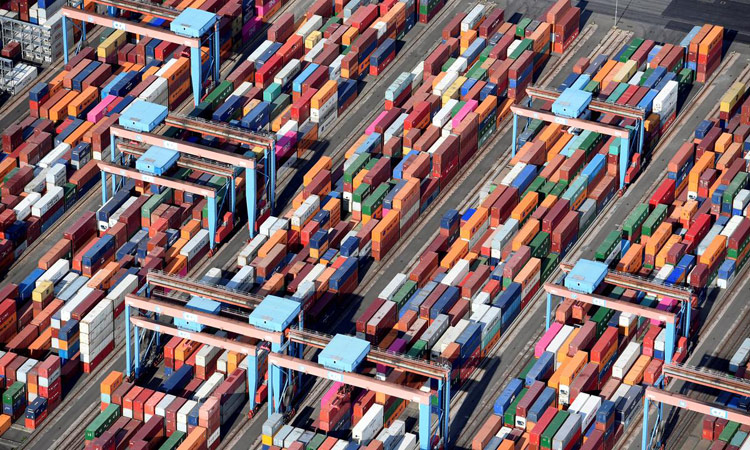 Berlin is set to further lower its economic growth forecast on Wednesday as Europe’s largest economy cools off, but ministers are unlikely to bend to foreign demands to boost activity with extra government spending.