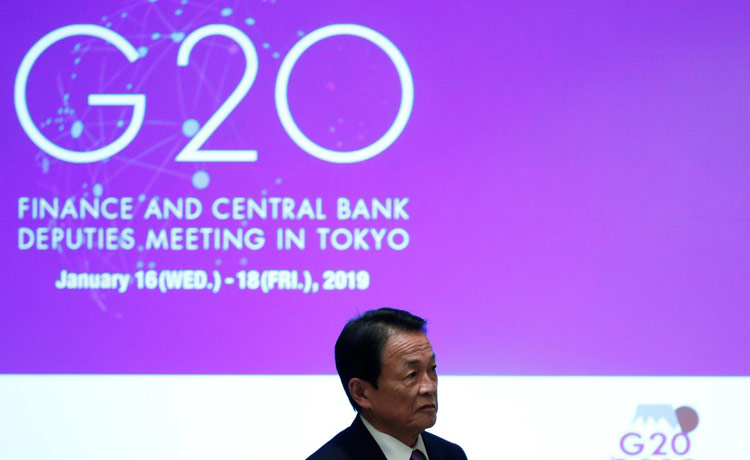 As chair of this year’s gathering of G20 major economies, Japan wants to deepen talks on global imbalances - an effort to divert Washington’s attention from bilateral trade imbalances and stave off US pressure to negotiate two-way trade deals.

“I told my G20 counterparts that the group must act with the spirit of global coordination,” Japanese Finance Minister Taro Aso told reporters on Thursday after a dinner of G20 finance leaders.

“I explained that global coordination must be strengthened to address the various problems we face,” Aso said.

A Japanese finance ministry official said the G20 was an ideal platform for discussing global imbalances.

“There was no disapproval to the argument that to address imbalances, global policy coordination was crucial,” the official said.

Protectionism and trade tensions have hurt business sentiment, and were among factors the International Monetary Fund identified as risks in cutting its global economic forecasts.

US President Donald Trump has distanced Washington from multilaterialism and prefers bilateral trade negotiations over a multilateral approach.

G20 finance leaders will debate topics Japan proposed, including global imbalances and steps to deal with demographic challenges, on Friday. They will not issue a communique after the meeting, the Japanese official said.

The G20 gathering comes before the first round of trade talks between Japan and the United States in Washington on April 15-16.

Trump has made clear he is unhappy with Japan’s $69 billion trade surplus with the United States - nearly two-thirds of it from auto exports - and wants a two-way agreement to address it.

“I don’t think they can reach a conclusion so easily,” Aso said. “It will take a long time.”