Chevron to buy Anadarko Petroleum for $33b - GulfToday

Chevron to buy Anadarko Petroleum for $33b 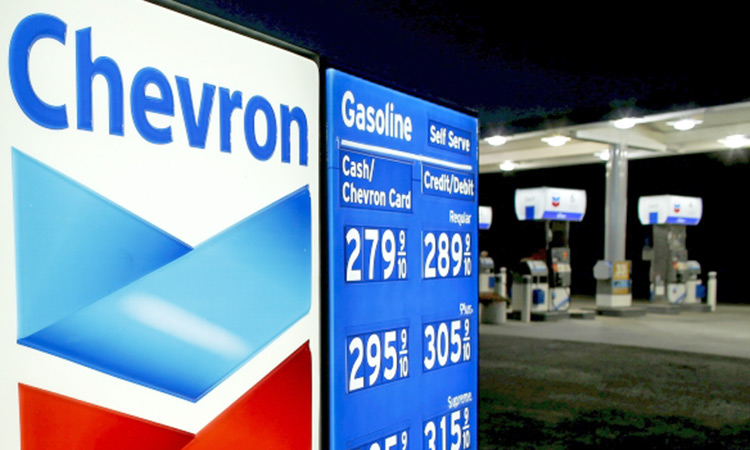 The deal announced Friday comes with US crude prices up 40% this year and vaults Chevron into a new league.

Chevron will buy Anadarko Petroleum for $33 billion in a cash-and-stock, energizing its deep water exploration in the gulf and in the energy-rich southwest region of Texas called the Permian Basin.

The deal announced Friday comes with US crude prices up 40% this year and vaults Chevron into a new league.

While the combined company will remain far behind Exxon Mobil Corp. and Royal Dutch Shell Plc. in market capitalization, it jumps from the fourth biggest producer among major drillers, to second, according to Wood Mackenzie.

«Chevron now joins the ranks of the UltraMajors - and the big three becomes the big four,» wrote Roy Martin, senior analyst at Wood Mackenzie, referring to Exxon, Shell and BP.

With the acquisition, Chevron gets access to Anadarko›s liquid natural gas operations in Mozambique. The combined company will also control a 75-mile-wide corridor across the Delaware Basin, just beside the Permian Basin, a region bountiful with natural gas that has been exploited through shale drilling.

There has been some pressure in energy markets as Opec tries to push prices higher through production cuts.

When the organisation of oil-producing states released its monthly report this week, it revealed that energy output from Opec had declined to levels not seen since early 2015.

Still, US crude was selling for less than $65 per barrel Friday. That›s far from levels well above $100 per barrel reached just before the economic downturn in 2008, and there are signals that global economic growth is slowing.

The acquisition of Anadarko could give Chevron a little more breathing room when crude prices do fall.

With savings the companies plan to book and rising cash flow, Chevron said Friday that it will bump up annual stock buybacks to $5 billion, from $4 billion a year, once the transaction is complete.

Chevron plans to divest $15 billion to $20 billion in assets between 2020 and 2022, with proceeds used to lower debt and to return additional cash to shareholders, the company said.

«This transaction builds strength on strength for Chevron,» said Chairman and CEO Michael Wirth. «The combination of Anadarko›s premier, high-quality assets with our advantaged portfolio strengthens our leading position in the Permian, builds on our deepwater Gulf of Mexico capabilities and will grow our LNG business.» Anadarko shareholders will receive 0.3869 shares of Chevron and $16.25 in cash for each share they own, or $65 per share. Chevron will issue about 200 million shares and pay approximately $8 billion in cash. It will also assume about $15 billion in debt.

Chevron Corp. will keep its headquarters in San Ramon, California. Anadarko Petroleum Corp. is based in The Woodlands, Texas.

The deal is expected to close in the second half of the year. It still needs approval from shareholders of Anadarko Petroleum Corp. and regulators. Shares of Anadarko jumped 32% at the opening bell Friday, while Chevron›s stock fell 5.3%.

Meanwhile, oil prices rose on Friday as involuntary supply cuts from Venezuela, Libya and Iran supported perceptions of a tightening market, already underpinned by a production reduction deal from Opec and its allies.

US West Texas Intermediate (WTI) crude futures were at $64.53, up 95 cents and set for a weekly rise of 2.3 percent, their sixth straight week of gains.

«For the momentum to continue next week, WTI needs to close today above $64 a barrel and preferably break the resistance of $65 a barrel. Volume has been very strong throughout the week,» said Petromatrix›s Olivier Jakob.

Oil markets have been lifted by more than a third this year by supply cuts led by the Organization of the Petroleum Exporting Countries, US sanctions on oil exporters Iran and Venezuela, plus escalating conflict in Libya.

The head of Libya›s National oil Corporation warned on Friday that renewed fighting could wipe out crude production in the country.

«We see Brent and WTI prices averaging $75 per barrel and $67 per barrel respectively through the rest of this year, but risk is asymmetrically skewed to the upside,» RBC Capital Markets said in a note.

«Geopolitically infused rallies could shoot prices toward or even past the $80 per barrel mark for intermittent periods this summer.»

Opec and its allies meet in June to decide whether to continue withholding supply.

On the demand side, most of the world›s growth in fuel consumption is coming from Asia, where China›s economic growth is expected to slow to its lowest in nearly 30 years at 6.2 per cent this year, a Reuters poll showed on Friday.