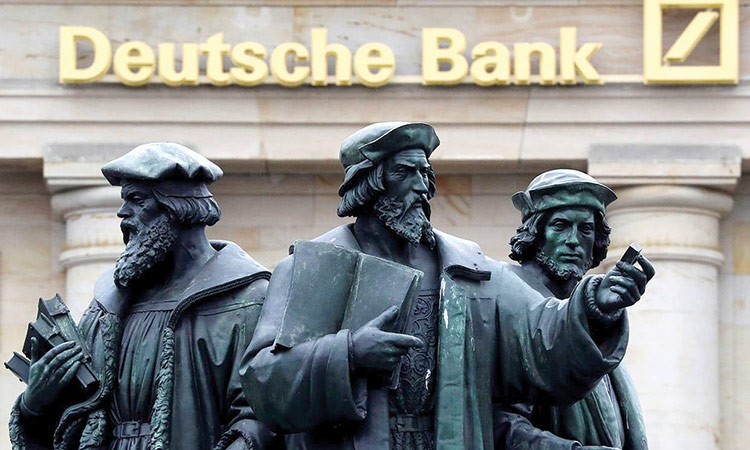 A statue is pictured next to the logo of Germany’s Deutsche Bank in Frankfurt, Germany. Reuters

FRANKFURT: Deutsche Bank came under increased pressure on Thursday to move forward on a tie-up with Commerzbank after Italy’s UniCredit was named as a potential alternative bidder for the German lender.

UniCredit could explore a merger with Commerzbank if talks with Deutsche fall through, two people with knowledge of the matter said on Thursday.

The people said UniCredit would not crash the talks on a tie-up between Germany’s two largest banks and UniCredit’s focus for now was on its turnaround plan.

Deutsche and Commerzbank announced talks on March 17 and two people with knowledge of the matter said on Thursday they were proceeding well but “very carefully”.

Deutsche Bank’s exploratory discussions with state-backed Commerzbank come after prodding by Germany’s finance ministry, which is worried about the future of the country’s biggest bank.

But a potential merger between the two has met stiff resistance from labour unions fearing jobs cuts, and some major investors.

Lawmakers are also warning Germany’s finance minister they will block any attempt to invest public money in a merged Deutsche and Commerzbank, a deal which could require up to 10 billion euros ($11.2 billion) of fresh capital.

Deutsche and Commerzbank have been divided over the pace of their talks, two people with knowledge of the matter said. Commerzbank would like to see a speedy decision on whether to deepen the discussions, while Deutsche Bank is playing for time.

A deal would see Berlin become a shareholder in the combined group, which one German official said will need an injection of fresh capital because of restructuring costs and the fact that losses on investments could be triggered by a tie-up.

The Financial Times first reported UniCredit’s interest on Thursday. UniCredit, Commerzbank and Deutsche Bank all declined to comment on the report.

If the Italian lender were to act, it would likely see Commerzbank remaining listed but fused with UniCredit’s German bank, HypoVereinsbank, one of the people said.

Shares in Commerzbank were up 3.2 per cent by 0742 GMT, while Deutsche Bank stock was down 2.0 per cent. Unicredit shares were down 1.2 per cent.

Any combination with UniCredit would be based in Germany while UniCredit would maintain its headquarters and listing in Milan. Reuters reported in 2017 that UniCredit had told Berlin it was interested in eventually merging with Commerzbank.

The FT reported that one of the parties might decide to walk away from the talks, adding a significant announcement could be made as early as this weekend, citing people briefed on the discussions.

Through its stake in Commerzbank, the German government would play a central role in any fusion, and lawmakers fear this puts it on the hook to shoulder losses if the bank runs into trouble.

Berlin could therefore pull the plug if it believes a deal would be politically or financially unpalatable.

Earlier the Commerzbank’s chief executive believes a strong and focused investment bank would be a good addition to the lender, according to a person familiar with his thinking.

The person, speaking on condition of anonymity, revealed Chief Executive Officer Martin Zielke’s thinking as Commerzbank talks about a possible merger with Deutsche Bank, which has a sprawling global investment bank.

Separately, Zielke promised employees on Friday a quick decision on whether to go forward with the merger, according to a memo seen by Reuters.

“I can promise you that we will strive to keep this period of uncertainty as short as possible and we will work hard to ensure that a decision is reached soon,” Zielke wrote.

Zielke said Commerzbank had a clear idea of how it could develop business in a sensible way.

“This is the reason why we are in conversations with Deutsche Bank,” he said.

Commerzbank’s chief executive promised employees on Friday a quick decision on whether to go forward with a merger with Deutsche Bank, according to a memo seen by Reuters.

“I can promise you that we will strive to keep this period of uncertainty as short as possible and we will work hard to ensure that a decision is reached soon,” Chief Executive Officer Martin Zielke wrote to employees.

Zielke said Commerzbank had a clear idea of how it could develop business in a sensible way. “This is the reason why we are in conversations with Deutsche Bank,” he said.