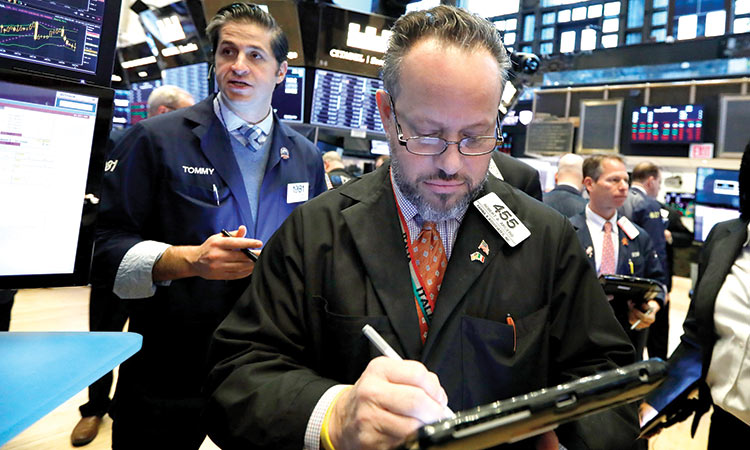 LONDON: European and Asian shares stepped back from eight-month highs on Thursday, as investors took money off the table amid fresh concerns about U.S.-China trade talks and as dire data from Germany signalled trouble for Europe.

Germany›s figures showed industrial orders fell at their sharpest rate in more than two years in February, driven largely by a slump in foreign demand.

It compounded signs that Europe›s largest economy has had a feeble start to the year, left the euro stuck at near $1.12, sent German Bund yields back below zero and looked set to end a four-day run of gains for share traders.

Futures pointed to a flat restart for Wall Street later too. MSCI›s broadest index of Asia shares also lost 0.3 per cent overnight after five straight days of gains had taken it to the highest level since late August.

Losses were led by Australia and New Zealand while Hong Kong, the Philippines and Indian markets were also in the red and Japan›s Nikkei paused near a recent one-month top.

Chinese shares were firmer again though, with the blue-chip index ending up 1 per cent which left them at a new one-year high and up nearly 40 per cent since the start of the year.

“We are expecting quite a constructive agreement between the US and China when it comes to trade,» said AllianceBernstein China Portfolio Manager John Lin.

He added it was probably now a consensus view among major investors and if it proved right, would raise other questions such as whether China›s government would «keep its foot on the (stimulus) pedal or ease off a bit.» Risk sentiment has otherwise been supported this week by signs of progress in Sino-US trade talks. White House economic adviser Larry Kudlow said on Wednesday the two sides aimed to bridge differences during talks, which could extend beyond three days this week.

Investors are keen to see if ongoing talks lead to an earlier-than-anticipated meeting between US President Donald Trump and his Chinese counterpart Xi Jinping to sign an accord. Trump will meet Vice Premier Liu He at the White House later.

“Also an important question would be whether an agreement would be sufficient to revive business sentiment and the global trade cycle,» JP Morgan Asset Management Asia Pacific Chief Market Strategist Tai Hui added.

“We believe on the margin it would help, but practically all investors we’ve spoken to in Asia in the past six months believe friction will still flare up from time to time.

Various media reported on Thursday the United States wanted to set a 2025 target for China to meet trade pledges.

The plan would see China committing to buy more US commodities, including soybeans and energy products, and allow full foreign ownership for US companies operating in China as a binding pledge.

“We›re covering issues that have never really been covered before, including enforcement,» Kudlow had said.

Traders were also squaring off positions ahead of US jobs data due on Friday after earlier disappointments this week. Wednesday›s figures showed services sector activity hit a more than 19-month low in March while private payrolls grew less than expected, hinting at softness in the world›s largest economy.

In the foreign exchange market, moves were modest after bigger swings overnight when all major currencies gained against the safe-haven yen.

India›s rupee did suffer its biggest fall of the year after the second cut in interest rates in short sucession but other than that it was thin gruel.

The greenback was just starting to firm against a basket of currencies at 97.16 ahead of US trading though it inched down against the yen.

The euro barely budged from $1.1225 as the minutes of the European Central Bank›s last meeting confirmed it has given up on raising its rates this year, while Sterling ticked down $1.3140 as British Prime Minister Theresa May held talks with the opposition Labour Party in a bid to break the Brexit deadlock.

The lower house of Britain›s parliament late on Wednesday also narrowly passed legislation which would force May to seek a delay to Brexit in order to prevent Britain leaving without a deal on April 12.

“We are disappointed that MPs (members of parliament) have chosen to back the bill,» May›s spokesman said on Thursday, warning it would tie the UK›s hands in Brexit negotiations.

In commodity markets, spot gold nudged up to $1,292 per ounce, while oil prices shook off a surprise build up in US crude inventories and record production to inch Brent back towards the $70 a barrel mark at $69.50. Global benchmark Brent has gained nearly 30 per cent this year, while WTI has gained nearly 40 per cent. Prices have been underpinned by tightening global supplies and signs of demand picking up.

“There is a clear bias to the upside with the supply restrictions,» said Michael McCarthy, chief market strategist at CMC Markets in Sydney, pointing to supply cuts by OPEC and others, along with sanctions on Iran.