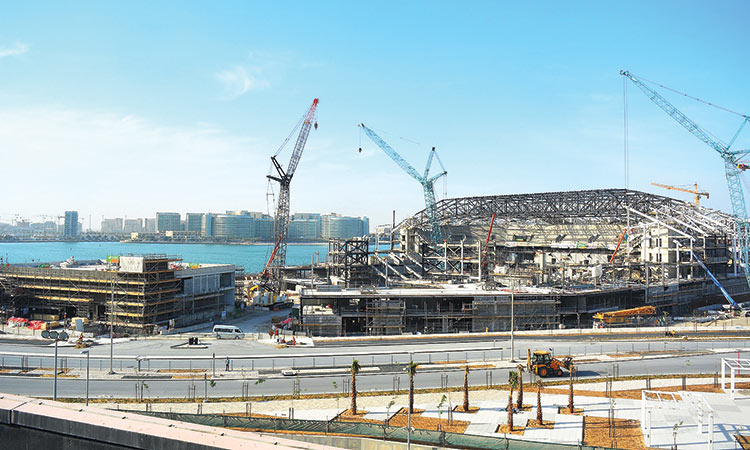 ABU DHABI: Miral, Abu Dhabi’s creator of destinations, has revealed a series of development updates at Yas Bay, Yas Island’s upcoming vibrant waterfront community to live, work and play. Once complete, Yas Bay will be home to Abu Dhabi’s newest unique experiences, transforming the southern end of Yas Island and contributing towards Miral’s ambition of making it one of the top global destinations for entertainment and leisure.

Yas Bay’s construction updates include the completion of concrete works on the first hotel, operated by Hilton, and road infrastructure and landscaping of the public realm, parks and promenade. When complete, the development will encompass Yas Bay Arena, The Residences – which forecasts 15,000 residents – a promenade and pier with 37 cafés and restaurants, 19 retail outlets, beach club, and two hotels, as well as being the new hub for Abu Dhabi Media Zone, twofour54.

During his latest visit to the site, Miral’s CEO, Eng. Mohamed Abdalla Al Zaabi witnessed the completion of Yas Bay’s most recent development milestones, including the final pour of concrete for topping out of the first hotel.

“As construction of Yas Bay progresses, we get closer to seeing what promises to be Abu Dhabi’s most vivid and energetic community come to life on Yas Island,” said Al Zaabi. “These milestones will prove attractive to investors who can now join Miral on its journey as we deliver the ultimate waterfront experience.”

Yas Bay provides a variety of investment opportunities, including ready-for-development land plots comprising residential, retail, and school usage. “We have already started conversations with potential partners, and look forward to working closely with investors who are eager to contribute to the unique experiences we’re creating within Yas Bay,” he added.

Across the development, select projects have made significant strides as they near completion. In March, Yas Bay Arena marked a major construction milestone with the installation of the largest roof truss. When finished, Abu Dhabi’s first-of-its-kind, multi-purpose indoor arena will enhance the UAE’s live entertainment industry and the capital’s nightlife scene with large-scale business and private events.

Miral is creating a world-class visitor experience on Yas Island, with Yas Bay set to become a compelling addition. Yas Bay will help to transform the southern end of Yas Island and reinforce the Island’s long-held appeal as a leading tourism destination.

It may be noted that Miral is Abu Dhabi’s creator of destinations, uniting people and places through unique, immersive and exciting experiences.

Yas Island is an island in Abu Dhabi development project of which was initiated in 2006 by Abu Dhabi-based Aldar Properties, with the aim of turning the island into a multi-purpose leisure, shopping and entertainment centre at an estimated total cost of over billion. This investment was planned as a multi-staged project to unfold in phases until 2018, with project stakeholders foreseeing the possibility of extending development by adding new venues and upgrading existing facilities.

It occupies a total land area of 2,500 ha (25 km2), of which 1,700 ha will be claimed for development. Yas Island holds the Yas Marina Circuit, which has hosted the Formula One Etihad Airways Abu Dhabi Grand Prix since 2009.

Warner Bros. World Abu Dhabi is also located on Yas Island near Ferrari World and Yas Waterworld and was built by Miral Asset Management. WB World is organised into six themed lands, Gotham City, Metropolis, Cartoon Junction, Bedrock, Dynamite Gulch and Warner Bros Plaza. Gotham and Metropolis are based on the cities of DC Comics super heroes Batman and Superman, respectively. Warner Bros.’s Looney Tunes and Hanna-Barbera cartoon libraries are featured in Cartoon Junction and Dynamite Gulch except for Bedrock which features the Flintstones. Warner Bros Plaza mimics the Hollywood of the past. The park opened on July 25, 2018, which makes it the world’s third Warner Bros. theme park.