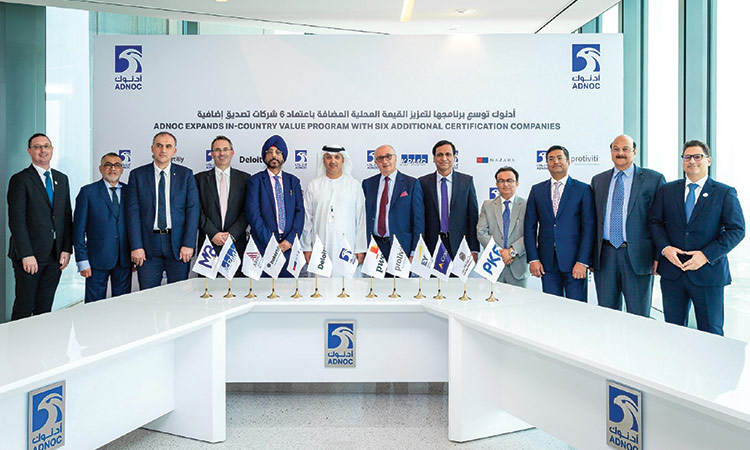 Rashed Saud Al Shamsi with the current and new partners during the signing ceremony.

Business Bureau, Gulf Today
ABU DHABI: The Abu Dhabi National Oil Company (Adnoc) announced on Monday that it has expanded its In-Country Value (ICV) Programme by appointing a group of 6 additional third-party certifying bodies who will be responsible for verifying and measuring suppliers’ ICV performance, bringing the total number of the Program’s certifying bodies to 12, from 6. The signing ceremony occurred at Adnoc’s HQ.

This announcement follows the completion of the Adnoc ICV Programme’s inaugural year, in which Adnoc’s spend on local goods and services put more than Dhs18 billion back into the UAE economy. Adnoc is now expanding the Programme to meet increasing interest among suppliers – not only in the UAE, but around the world – as the company continues to deliver on its most recent procurement forecast, delivered at Adnoc’s 3rd annual Business Partnership Forum, which outlined the increasing volume and range of new business opportunities being tendered across the Group.

The appointment of 6 additional certification companies will not only drive deeper competition among the private sector and bring suppliers’ certification costs down, but enhance the overall speed and efficiency of the ICV certification process. This will, ultimately, expedite the rate at which Adnoc, in partnership with its suppliers, will deliver more value for the UAE, stimulate GDP diversification and expand employment opportunities for UAE nationals.

Speaking at the signing ceremony, Rashed Saud Al Shamsi, Business and Commercial Support Director at Adnoc, said: “The launch of Adnoc’s In-Country Programme was a critical step in catalysing our nation’s progress and development. We’re pleased with the constructive and positive feedback we’ve received from our partners and suppliers this past year, and we look forward to driving even more in-country value in the years ahead.

“That is why we’re proud to be deploying a total of 12 leading certification companies – some local, others global – all experts in their field, committed to serving our community of suppliers as they help us advance our In-Country Value Programme’s mission to drive national prosperity and growth,” he concluded.

More than 2,000 suppliers have already obtained ICV certification. The certifying bodies’ ICV evaluation formula takes account of goods manufactured in the UAE, the value of third-party spend in the UAE, a company’s investment in the UAE and its Emiratisation record, as well as UAE-based expatriate employees’ contribution to the national economy. The evaluation also takes account of a supplier’s operating costs and depreciation cost, along with any exports created.

It may be mentioned that Adnoc is one of the world’s leading diversified energy and petrochemicals groups with a daily output of about 3 million barrels of oil and 10.5 billion cubic feet of natural gas. With 14 specialist subsidiary and joint venture companies, Adnoc is a primary catalyst for the UAE’s growth and diversification.

The well was the first to be drilled in a fully integrated way – delivered to Adnoc Drilling’s client, Adnoc Onshore – following the announcement of a strategic partnership between Adnoc and Baker Hughes, a GE company (BHGE), which is helping to enable and support the growth and development of Adnoc Drilling as the company targets new business opportunities in the UAE and beyond.

This first well was completed ahead of plan and within budget, achieving a best-in-class performance in terms of drilling efficiency.

Adnoc plans to grow its conventional drilling activity by 40 per cent by 2025 and substantially ramp up the number of its unconventional wells, as it targets 4 million barrels of oil production capacity per day by the end of 2020 and 5 million by 2030. Adnoc Drilling will remain the sole rig provider to the Adnoc Group of companies and capitalize on Adnoc’s growing upstream activity as it demonstrates increasing drilling efficiencies and improved customer service levels.

The UAE is located in one of the world’s largest hydrocarbon super-basins with significant potential to tap its undeveloped reservoirs and further develop its existing resources.