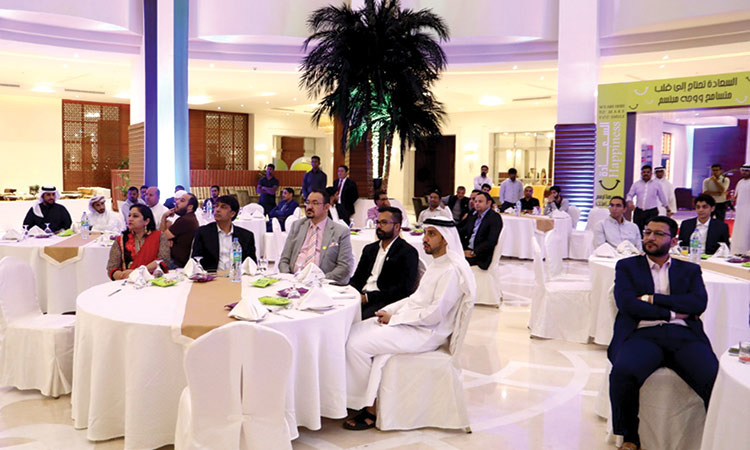 Representatives from the companies in the food processing and trade sector during the event.

Sharjah: The Sharjah Chamber of Commerce and Industry (SCCI) has launched a new initiative on fostering dialogue and partnership among the private sector’s representatives in certain sectors in the Emirate of Sharjah.

This new initiative will feature holding regular business meetings, through which the SCCI will gather specialized companies in certain trade activity, in addition to other companies which are specialized in purchasing and exporting the products of those companies. This step will have positive impact including the encouragement of local product, facilitation of holding partnerships between the concerned companies, as well as supporting the private sector and learning more about its visions and recommendations in terms of developing and enhancing the competitiveness of the private sector.

In his speech during the opening meeting, Abdulaziz Shattaf, Assistant Director-General for Member Services at the SCCI, pointed out that the new initiative is a significant step forward towards the launching of a serious and effective dialogue among the various components of the private sector, especially in its fields of expertise. He considered that the initiative was kicked off in an appropriate time to serve the entire economic sectors in the Emirate of Sharjah.

Shattaf said: “The food processing sector has been selected, as the first sector in this initiative, due to the key role this sector plays in pushing forward to drive Sharjah’s economic growth and the existence of a large number of working companies in this sector whether in food production or foodstuff retail market.

He underlined that the aim of organising such meetings is to boost the high-quality local product and to reinforce and encourage the private sector to initiate a bilateral dialogue with other companies working in the same field with a view to examining the possibility of holding joint partnerships and economic cooperation.

The Assistant Director-General for Member Services at the SCCI further added: “The meeting allows the SCCI to learn closely about the private sector’s proposals and its development opportunities, besides finding the ideal method, through which the SCCI would help private sector companies develop their business.”

“The visions and recommendations we’ve learned today, as a consequence of this innovative dialogue, will help us design a clear road map in order to promote the food industry sector and contribute to enhancing Sharjah’s economy. This is considered a part of SCCI’s key role, as a representative of the private sector, in developing its performance to be a distinctive representative of the private sector and to underpin its competitiveness in the business environment,” Shattaf added.

On a similar note, the participants hailed the initiative and its timing, noting that it’s clearly showing Sharjah Chamber’s keenness on enhancing the investment environment in the Emirate and listening to the diverse components of the private sector.

The participants also saw that such meetings will help support their business, through the formation of cooperative relationships and economic partnerships. They said that the meeting has been concluded and the recommendations will be considered to promote the sector’s performance and to enhance its contribution to economic growth.

Worth mentioning that this is SCCI first initiative in 2019, where it reinforces the efforts of SCCI in representing the private sector and achieving its objectives. The SCCI is planning to organise such meetings on a regular basis throughout the year with the different key sectors in the Emirate of Sharjah, with an aim of considering its requirements, needs and examining the proper methods for bolstering its activity and business.

The chamber is keen to include in its membership all the companies and establishments practicing economic activity in the emirate whether it is trade, industries or professions. It has been obligatory for the chamber to follow the economic and civilizational development witnessed by United Arab Emirates a matter that naturally requires change on the different services and activities of the chamber.

The law No (1) of the year 1980 organizing the Sharjah Chamber of Commerce & Industry was issued too include the articles of association and the legal rules and provisions drawing the chamber’s ambitious objects and set the means for its achievement through administrative and executive body having positions according to responsibilities.