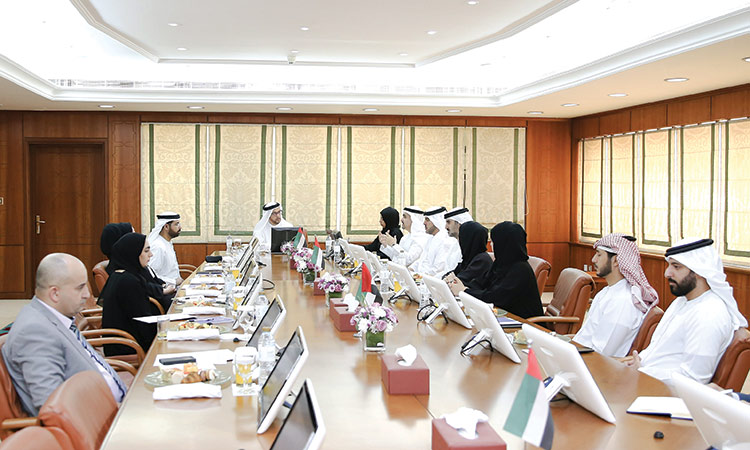 AJMAN: The Standing Committee for Economic Development (SCED) in Ajman held its third meeting for 2019 chaired by Abdullah Al Muwaiji, Chairman of SCED. The meeting thrashed out the latest developments in the economic affairs in the emirate and the major economic and tourist projects.

A delegation from the Dubai Islamic Economy Development Centre joined the meeting of the SCED.

Commencing the meeting, Al Muwaiji praised the efforts of the Committee and its role in following up the various economic and tourist projects in the emirate and exploring the best practices in the major projects in the country. He pointed out that the economic sector requires adopting the best practices and innovative solutions that enhance its growth and development.

The meeting began by reviewing a report on the Ajman Contact Centre and its role in linking the emirate’s community with government departments. Zubair Al Junaidi, Director of the Ajman Contact Centre briefed the meeting on the Center’s efforts in terms of increasing the number of services offered and languages to ensure communication with various individuals.  He said, ‘The Centre received inquiries, proposals, notices, complaints, feedbacks and other services amounted to 84,691 calls during 2018, including more than 53,000 general inquiries, 2,722 tip-offs and 792 proposals.”

He also briefed the attendees on a comparison between the first half of 2018 and the second half of the same year on the Centre’s performance.

Al Muwaiji stressed the need to provide periodic reports by the Ajman Contact Centre to identify the strengths and weaknesses of all sectors in general and the economic sector in particular. He further directed to monitor all complaints received by the Centre and address them.

Abdullah Mohammed Al Awar, Executive Director of Dubai Islamic Economy Development Centre, presented a report on the Islamic economy globally and the Dubai’s efforts in the growth of the Islamic economy. He pointed out that the volume of Muslims spending on the food and beverage and lifestyle sectors reached 2.1 trillion dollars in 2017. Furthermore, the growing growth of the promising Islamic nations has played a major role in influencing markets in terms of promoting Islamic concepts in diverse sectors, including food, Islamic banking, finance, fashion, cosmetics, family tourism and healthcare, he added.

He further briefed them about the Center’s vision to establish Dubai as the capital of the Islamic economy and to strengthen its position as a global hub for the Islamic economy, as well as a reference to standards and innovation in all its sectors.

He spoke about the Centre’s mission in establishing strategic orientation and supporting stakeholders in developing and implementing ambitious initiatives to promote the growth of the Islamic economy globally.

He highlighted achievements of the Dubai Islamic Economy Development Centre and its cooperation with the strategic partners in establishing Dubai as the capital of the Islamic economy by launching a number of initiatives in the most strategic sectors.

Al Muwaiji praised the efforts of the Centre in the development of Islamic economy, stressing the need to strengthen partnership and cooperation between the economic authorities in the emirate of Ajman and the Centre, since that the Islamic economy deals with various economic fields and contributes significantly to the global economy.

During the meeting, the attendees were also briefed on the government’s strategic indicators and objectives for 2021.

Moreover, the meeting reviewed the latest developments in the heritage district, stressing its tourist and economic importance for the emirate. The project represents a point connecting the past and the present and enhances history of Ajman and the preservation of the cultural heritage.

They also reviewed the initiative of “Youth Station” of the Federal Foundation for Youth, and the ongoing cooperation with Municipality and Planning Department-Ajman, to implement the initiative in the emirate. It seeks to provide the best opportunities for startups for youth in different fields to start a new experience in entrepreneurship with assessing their performance during their period of operation.