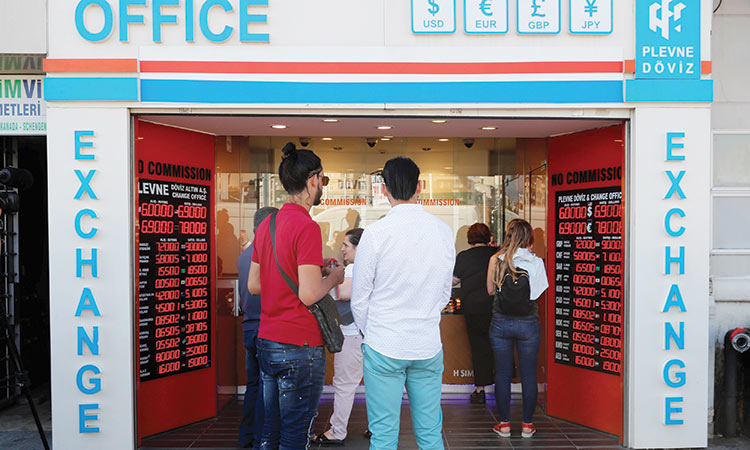 ANKARA: Turkish President Tayyip Erdogan said on Thursday the central bank (CB) must cut interest rates or inflation will remain high, and he blamed the recent volatility in the lira on “attacks” by the United States and other Western countries.

The Turkish currency dived 5 per cent against the dollar on Thursday after banks started providing lira liquidity to the London market again following several days of authorities withholding liquidity to support the currency.

The central bank has made a series of moves to underpin the lira this week and bankers said it took a fresh step on Thursday, raising its total lira swap sale limit to 30 per cent from 20 per cent for swap transactions that have not matured.

It had raised the limit to 20 per cent on Monday from 10 per cent in a move aimed at increasing the bank’s forex reserves, which fell sharply in the first two weeks of March.

Those falls have raised uncomfortable questions about Turkey’s balance of payments and its ability to roll over foreign loans - and how and from whom it would seek emergency reserves if necessary.

The lira weakened as far as 5.6465 against the US currency from 5.33 on Wednesday. Last year, it plunged almost 30 per cent against the dollar.

The lira has come under renewed pressure recently over concerns about Turkey’s balance of payments, its ability to service its foreign debt, and repeated calls from Erdogan, who has described himself as an “enemy of interest rates”, for the central bank to cut rates.

Speaking to young voters in Ankara ahead of local elections on Sunday, Erdogan said Turkey had thwarted the attacks by the United States and the West on the lira and added that some banks were playing a game on the currency ahead of the vote. He did not name the banks.

“They can’t find lira now, they are struggling in terms of payments. The tables have turned. While they can’t do this, the lira firms and dollar falls,” Erdogan said.

“Banks playing this international game have started saying they won’t publish reports in election times. Publish it, what’s that going to change?” Erdogan said. “We must discipline the speculators in the market.” Turkish financial regulators opened investigations into JP Morgan and other banks at the weekend, accusing them of providing misinformation in reports that stoked volatility in the lira.

The country head to polls on Sunday to vote in municipal elections that Erdogan has described as a “matter of survival” for Turkey, as the economy has taken a nosedive.

Inflation, which has been in double digits since 2017, rose to nearly 25 per cent last year. In February it stood at just under 20 per cent.

Erdogan, whose unorthodox economic views have unnerved investors, said on Thursday that inflation would fall as interest rates were cut.

The Turkish lira plunged as much as 5 per cent against the dollar on Thursday as investors continued to fret about moves by Turkish authorities to withhold lira liquidity from the London market. Brokerage Integral Yatirim said volatility was likely to continue until the elections, making it difficult to identify a clear direction.

The London overnight swap rate plunged to 180 per cent on Thursday, Refinitiv Eikon data showed. On Wednesday it had surged as high as 1,200 per cent in what was a stop-gap measure to bolster the lira. That was by far its highest on record, and economists said that level was no longer based on actual trading.

Such rates are a huge hurdle to foreign investors looking to bet against the lira, to hedge or close out positions. They have thus sold off holdings in Turkish stocks and bonds which have came under heavy pressure this week.

The cost of Turkey’s debt rose, with the yield on the benchmark 10-year bond climbing to 19.12 per cent from 18.21 per cent on Wednesday. It has risen 2.5 points since the end of last week.

The main Istanbul share index, which weakened more than 12 per cent in the week to Wednesday’s close, rose 0.75 per cent on Thursday morning.

The head of the Turkish banking association, in a statement to Reuters on Wednesday, said lira swap rates were not surging due to banks withholding liquidity from foreign banks.

Global bond yields continued to spiral lower on Thursday as recession fears fed expectations of more policy easing by major central banks, while Turkey’s lira took a 5 per cent beating as pressure ratcheted up on its volatile markets.

The day’s real fireworks were from Turkey’s lira, one of the currencies at the heart of last year’s emerging market meltdown.