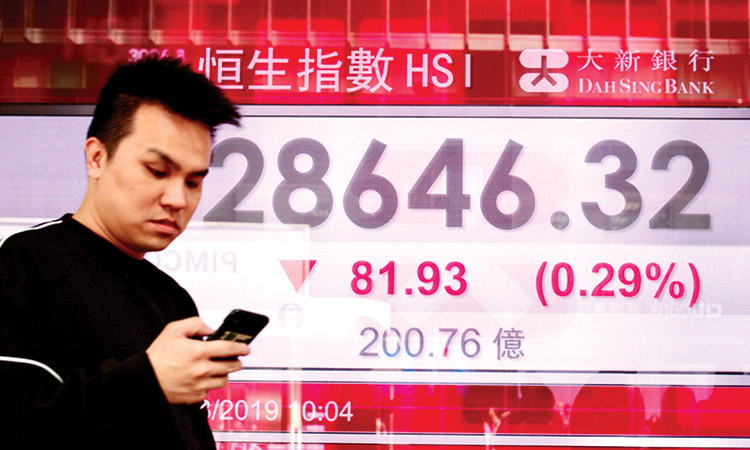 A man walks past a bank electronic board showing the Hong Kong share index outside a local bank on Thursday. Associated Press

HONG KONG: Hong Kong has issued online-only banking licences to three groups, including joint ventures (JVs) of Standard Chartered and BOC Hong Kong, in what could be the biggest shake-up in years in the city’s retail banking sector dominated by old-guard lenders.

The licence will give holders access to a lucrative retail banking market in the Asian financial hub, where many consumers are unhappy with the current options.

According to research from Accenture, 43 per cent of people living in Hong Kong have a positive experience when visiting their bank branch versus a global average of 57 per cent.

“The biggest goal for this year is a super smooth user experience for core banking services, making sure that it is highly secure, and that our users know that. That’s easy to say, but not easy to do,” ZhongAn International President Wayne Xu told Reuters in an interview.

But “the path to profitability is very viable,” Xu added.

Core offerings would include loans, deposits and transfers, Xu said, and the ZhongAn venture would primarily target three segments of users: a new generation of customers who are fluent in doing everything on a digital device, small- and medium-sized enterprises, and start ups.

However, the entrenched position in Hong Kong of established banks, such as HSBC, StanChart and a slew of Chinese banks, is expected to be a major challenge for the online-only licence holders.

HSBC, for example, made nearly $6 billion from its Hong Kong retail banking and wealth management operations last year, a third of total group profits and compared with $476 million in Britain, its second most profitable retail banking market.

“It’s definitely a positive for the Hong Kong market, but the virtual banks have a long way to go,” said Hoi Tak Leung, a senior technology sector lawyer at Ashurst.

“There’s going to be some fierce competition with each other, and with the incumbents, and it is unlikely all will be successful.”

Some 33 virtual banking applications were submitted by the deadline of Aug. 31 last year, and the HKMA short-listed eight.

Besides individuals, small firms, which have long complained of difficulties in opening bank accounts in Hong Kong, will also be targeted by the new online lenders, with small loans, foreign exchange and payment services among those on offer.

StanChart will own 65.1 per cent of SC Digital Solutions Ltd JV, with the rest owned by Ctrip Financial, a unit of travel firm Ctrip.com, as well as Hong Kong-based telecoms groups PCCW Ltd and its unit HKT Trust and HKT Ltd.

BOC Hong Kong, a unit of Bank of China, will own 44 per cent in the Livi VB Ltd JV, while JD Digits, a financial affiliate of Chinese e-commerce firm JD.com, will hold 36 per cent and retail and property group Jardines 20 per cent.

ZhongAn International is a joint venture founded in 2017 between a subsidiary of ZhongAn Online and realtor Sinolink Group.

ZhongAn Insurance’s executive chairman, Ou Yaping, sits on Sinolink’s board and holds a 45 per cent stake in the company, according to Refinitiv data. Xu said ZhongAn, China’s first online insurer, would bring its technology platform and experience of operating online financial services. Sinolink will “will provide local access, capital and a lot of local knowledge”, he added.

StanChart, which makes the bulk of its revenue in Asia, has made investing in digital technology to accelerate growth in retail banking a key part of its new strategy.

Hong Kong shares clawed back from losses to close slightly higher on Thursday, as hopes of a positive outcome from U.S.-China trade talks helped to lift sentiment, but falling US Treasury yields continued to feed investors’ recession fears.

The sub-index of the Hang Seng tracking energy shares dipped 0.2 per cent, while the IT sector declined 0.18 per cent, the financial sector ended 0.1 per cent lower and the property sector rose 1.25 per cent.

The Hang Seng had spent much of the day in negative territory, with falling US 10-year yields feeding fears that an inverted US Treasury yield curve could signal a recession.