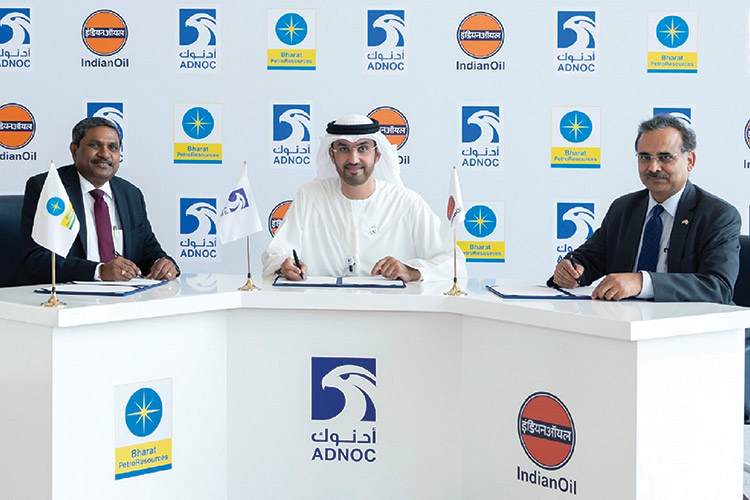 The award has been endorsed by Abu Dhabi’s Supreme Petroleum Council (SPC) and represents a further deepening of the fast-growing UAE-India energy relationship as well as the continued expansion of Adnoc’s strategic partnerships with those who can provide access to key growth markets for the company’s crude oil and products.

The consortium will hold a 100 per cent stake in the exploration phase, investing up to Dhs626 million ($170 million), including a participation fee, to explore for and appraise oil and gas opportunities in the Block.

Following successful exploration activities and appraisal of the existing discoveries the Indian consortium will be granted the opportunity to develop and produce any discoveries. Adnoc has the option to hold a 60 percent stake in the production phase.

The agreements, which, collectively, have a term of 35 years, were signed by Dr. Sultan Ahmed Al Jaber, Minister of State and Adnoc Group CEO, Duraiswamy Rajkumar, Chairman and Managing Director of Bharat Petroleum Corporation, and Sanjiv Singh, Chairman of Indian Oil Corporation.

Dr. Al Jaber said, “This award highlights the important role of energy cooperation in strengthening the strategic relationship between the UAE and India. It also underlines Adnoc’s 2030 smart growth strategy and our targeted approach to engage with value-add partners who can contribute the right combination of market-access, capital and technology, as we reinforce our position as an essential energy provider to the world.

“The consortium of Bharat Petroleum Corporation and Indian Oil Corporation, both of whom Adnoc already partners with offshore, was selected after a very competitive bid round. The open bidding process represents a major advance in how Adnoc is accelerating the exploration and development of Abu Dhabi’s substantial untapped hydrocarbon resources as we continue to maximize value, in line with the UAE leadership’s directives.”

The onshore exploration block awarded to the Indian consortium will target, specifically, the conventional oil and gas opportunities in the area. However, the Onshore Block 1 area also covers the separate Ruwais Diyab Unconventional Gas Concession. There, Adnoc’s partner, Total, is conducting an exploration and appraisal phase, targeted exclusively at tight gas resources in the Diyab formation, which will then be followed by a 40-year production term.

In turn, Rajkumar said, “We are elated with the award of Onshore Block 1, which strengthens our historical engagement with Adnoc and the UAE, giving further impetus to the already flourishing relationship in the energy sector between Adnoc and India’s leading Oil and Gas Fortune 500 companies, Bharat Petroleum Corporation and Indian Oil Corporation.”

The exploration phase will see the Indian consortium leverage, and contribute financially and technically to, Adnoc’s mega seismic survey, announced last year. The survey is deploying industry-leading technologies to capture high-resolution 3D images of the complex geology up to 25,000 feet below the surface and will be used to identify potential hydrocarbon reservoirs.

Singh said: “We are delighted to be chosen by Adnoc to participate in this project, which will strengthen our efforts to achieve India’s energy security. It is the second time that Indian oil and gas companies would venture into the development of hydrocarbon resources in the UAE, after acquiring stakes in Abu Dhabi’s Lower Zakum Concession. We look forward to further strengthening our relationship in the hydrocarbons sector of the UAE.”

Indian Oil Corporation, India’s largest commercial enterprise, caters to nearly half of India’s petroleum consumption with 11 of India’s 23 refineries and a 13,000-km pipelines network. Bharat Petroleum Corporation also has a number of major refineries in India. Both companies operate across the full hydrocarbon value chain.