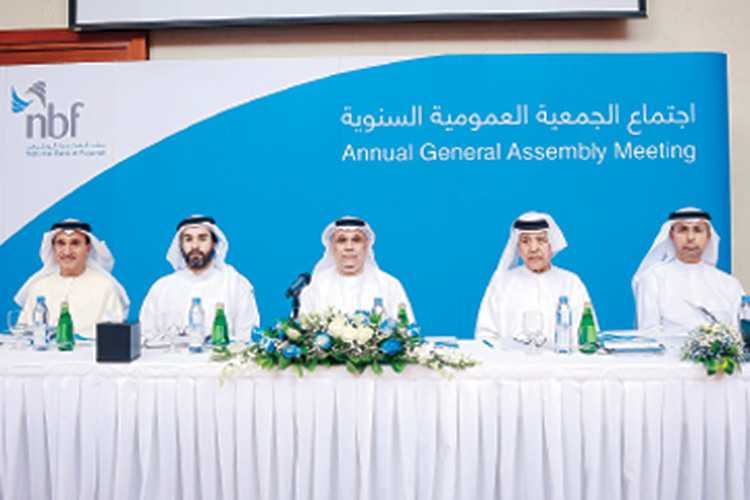 The Annual General Assembly Meeting of National Bank of Fujairah in progress.

The bank’s shareholders also approved the Chairman’s and Directors’ Reports, and the Internal Shari’a Supervisory Committee report for NBF Islamic, the Islamic banking window of NBF. In addition, the bank’s Corporate Governance Report and the consolidated financial statements for the year ended 31st December 2018 were discussed and approved.

Shareholders confirmed the appointment and remuneration of the bank’s new external auditors, Ernst and Young, and Internal Shari’a Committee members for NBF Islamic for 2019. The Board of Directors’ remuneration proposal of 0.8 per cent of the net profit, after deducting all depreciation and reserves, for its members was also approved.

Through a special resolution, the shareholders considered and approved the increase in ceiling of non-convertible additional Tier 1 capital instruments by US$500 million for the purposes of strengthening the Bank’s capital base, taking the Tier 1 capital ceiling to $636.1 million.

Commenting on the meeting outcomes, Sheikh Saleh Bin Mohamed bin Hamad Al Sharqi, NBF Chairman, said, “I am pleased to record that NBF’s best ever annual performance occurred in 2018, when the bank achieved its highest operating profit of Dhs1.1 billion, up 15.2 per cent over 2017 operating profit of Dhs913.6 million.”

“At the same time, the Group exhibited robust quality business growth and proactive asset and liability management in the face of low economic activity and volatile conditions in the global markets.”