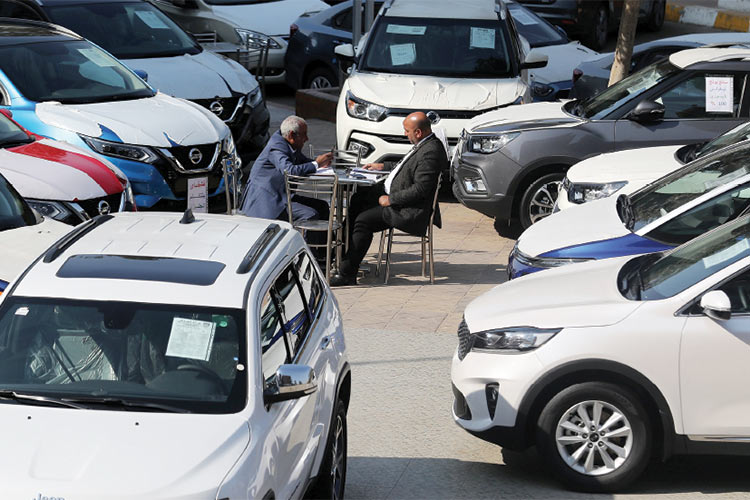 A sales staff assists a customer at a dealership in Cairo. Reuters

A campaign calling on Egyptians to stop buying new cars to curb price rises has dented sales, but supporters say values must fall further before cash-strapped customers can return to the forecourts.

With a population of more than 98 million, Egypt is a potentially huge market, though only a minority own cars.

The movement for cheaper vehicles began several years ago under the slogan “Let it rust” - an appeal to let vehicles rust in car dealership yards - as Egyptians hit by austerity struggled to make ends meet.

It gained momentum in the run-up to Jan.1, when a customs duty on European-made vehicles was slashed to zero.

That led to a drop in prices, but campaigners say they need to go lower. They argue agents have hiked prices far more than they should have, since Egypt’s pound was sharply devalued against the dollar in November 2016.

“There are the beginnings of price reductions, but until this moment, they are not satisfactory for the Egyptian citizen,” said Mohamed Rady, founder of “Let it rust”.

“We’re carrying on until we reach a price and a profit margin that are reasonable compared with cars abroad,” he said.

According to several Cairo car dealers, prices for non-luxury passenger vehicles decreased by between 20,000 and 40,000 Egyptian pounds ($1,150-2,300) after the scrapping of the customs fee. Luxury car prices fell by roughly 100,000-150,000 pounds. But some customers are still staying away.

Hossam Hassan Abdellatif, the manager at Auto Mega, a small showroom, said he previously sold up to six cars a month and now only sells two or three.

Nationwide, car sales fell 42 per cent month-on-month in January to 11,460 vehicles, from 19,804 in December, according to data from the Automotive Marketing Information Council (AMIC). January’s sales were up 10.8 per cent year-on-year, but that is far below the average monthly year-on-year increase of 39.3 per cent from 2017 to 2018.

Economic pressure on many Egyptians has intensified since authorities enacted reforms and austerity measures including the devaluation since late 2016. Transport costs have risen sharply.

The number of registered vehicles rose by 50 per cent to 9.9 million between 2012 and 2017, but the increase slowed after 2016, according to state statistics agency CAPMAS.

Gamal Ismail, a 59-year-old pensioner who owns a 2006 Nasr Sahin, a discontinued Egyptian version of a Fiat 131, said he cannot afford to buy a new car despite his son nagging him to.

“Prices are not within my means,” he said, adding they need to fall by half for him to afford a new car.

Around 20-22 per cent of cars imported in 2018 came from Europe, according to Alaa Elsaba, a member of the Cairo Chamber of Commerce’s auto division and head of the Elsaba Automotive dealership.

Prices for European cars had fallen in line with predictions, he said, rejecting claims that cars in Egypt were more expensive than in other countries.

The government hopes to bolster Egypt’s auto industry, mandating last year that cars in Egypt have a minimum of 46 per cent locally-manufactured components.

Last month Nile Car Gate, a new entrant to the market with connections to Egypt’s powerful military, promised to help bring prices down. The company promotes itself as the first Egyptian firm to import cars at a discounted profit margin of six per cent.

Its parent company is Orient Investment Group, a private company that was founded by ex-military officers, two security sources said. The company could not be reached for comment.

Meanwhile, Egypt’s Agriculture Ministry said on Wednesday it would grow about 1.1 million acres of rice in the 2019 season, up from 800,000 acres last year, in an effort to reduce the country’s import bill.

The North African nation began importing rice, a crop it typically had in surplus, in 2018 to save water.

Cairo increased fines for illegal rice cultivation last year and decreed that just 724,000 feddans could be planted. A feddan is roughly one acre.