From transport to telecoms, construction urged to get climate-wise - GulfToday

From transport to telecoms, construction urged to get climate-wise 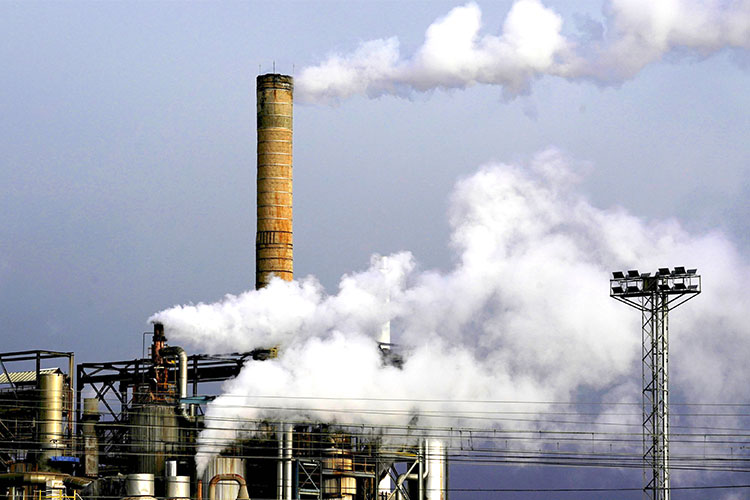 Vapour comes out of chimneys at a sugar processing factory in Spain. Vincent West/Reuters

BARCELONA: Transport, energy and telecommunications networks must be built with clean power, run on it and be better able to withstand disasters if the world is to curb global warming and meet its development goals, infrastructure and climate specialists said on Monday.

Researchers estimate that about $90 trillion will need to be spent globally by 2030 on building and updating infrastructure.

With existing infrastructure today accounting for about 70 percent of heat-trapping emissions around the world, what is built and how will determine how effectively the world combats climate change, experts told a conference on sustainable infrastructure in Barcelona.

Without more effort to ensure infrastructure uses greener materials and sources of energy, "we will totally explode our carbon budget ... which we cannot allow", said Christiana Figueres, a former UN climate chief.

Buildings, for example, can be designed to use less energy for heating and lighting while producing their own energy and even selling the surplus to others, she noted.

Those benefits can exceed the extra upfront investment costs, she said.

James Grabert, director of sustainable development mechanisms for the U.N. climate change secretariat, said much more infrastructure will be required to meet basic human needs, from food and water to housing, particularly in poorer but fast-growing nations.

Building that in a clean way without relying on fossil fuel energy is essential to meet the Paris Agreement goals of keeping global temperature rise to "well below" 2 degrees Celsius, and ideally to 1.5C, above pre-industrial times.

"If we do this right - if we have a low-emissions, climate-resilient approach - not only will we succeed in keeping on a path to lower than 2C or 1.5C (of warming), we are also going to help billions of people," he told the event.

Figueres, who is the convenor of Mission 2020, a campaign that aims for global emissions to start falling from next year, said failing to protect infrastructure from climate change impacts, such as floods and storms, would leach away the budgets communities, cities and countries could otherwise spend on ending poverty and hunger.

"We will be in a non-ending cycle of build, destroy, reconstruct," she said. "In order to protect even the slightest capacity to deliver on the SDGs (Sustainable Development Goals), our infrastructure has to be highly resilient."

But about 60 percent of new infrastructure needed by 2030 will be in the developing world, where investment has to double to meet global climate and development goals, according to the Organisation for Economic Co-operation and Development.

As transport and buildings are constructed across Asia and Africa, the challenge is to attract finance that will back greener projects - which may not always be the cheapest upfront - in an uncertain regulatory environment, the conference heard.

Kirsten Snow Spalding, director of the Ceres Investor Network, whose members manage $25 trillion in assets, said some big investors such as pension funds were starting to push for policies and standards that would help them put their money into sustainable investment.

But the change was not happening fast enough, she said.

"If we do nothing, then investors will simply follow the market," with most seeking to maximise financial returns and only a small amount of money going into green infrastructure, she added.

"How do we disrupt the Business-as-usual perspective of institutional investors and get them moving more money, more quickly into... the infrastructure that will be climate-sensitive, resilient and low-carbon for our future?" she asked.

One way to do this, she added, would be for governments and development banks to provide funding that can help reduce the risks of investing in emerging markets as part of a joint approach focused on addressing climate change.

Takahiro Tsuda, director of development policy coordination at Japan's Ministry of Finance, said Tokyo was working to put sustainable infrastructure on the agenda of G20 leaders when they meet in Osaka in June.

The aim was to get G20 countries to commit to "quality infrastructure" that is resilient to disasters, and generates economic, environmental and social benefits, he said.

Guidelines were being prepared to help governments actually build it, he added.

Quality infrastructure can form the backbone of local economic development, he noted - and should not be sacrificed in the rush to build more, more quickly.

"High-quality infrastructure can reduce operation and maintenance costs," as well as encouraging users to pay for better services, he added.

Luigi Carafa, executive director of the Barcelona-based Climate Infrastructure Partnership, which hosted the conference, said it was important to define sustainable infrastructure, and not to forget the crucial but less visible parts, such as telecommunications.

For example, telecoms are expected to account for 3.5 percent of global greenhouse gas emissions by 2020 with the advent of 5G networks, he said.

The climate action strategies countries have prepared to comply with the goals of the Paris Agreement can serve as a base for shaping policy on green, resilient infrastructure - "but we need to translate that into an investment plan", he added.