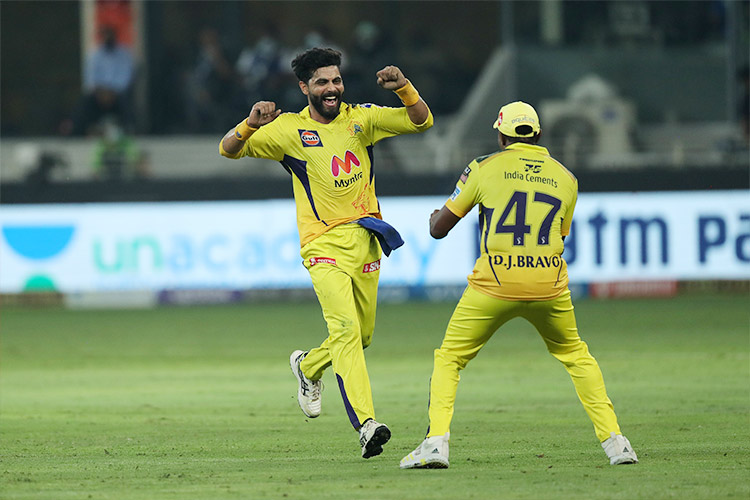 In reply to Chennai’s mammoth total, Kolkata also got off to a flying start as the ever-reliable opening duo of Venkatesh Iyer and Shubman Gill gave a solid start to them.

Iyer hit Chahr for a boundary off the second ball of the first over to blow the trumpet, signaling a tough battle ahead. They shared a 91-run partnership for the first wicket to keep Kolkata in hunt before another collapsed saw their hopes vanishing in the air.

Iyer was more brutal of the two as he sent everything to the boundary rope that was hurled on him. He hit Jadeja for a six to bring up his fifty in style off only 31 balls.

Shardul Thakur broke the dangerous-looking partnership to give Chennai a much-needed breakthrough. Iyer miscued a shot and the ball went high up in the air as Jadeja completed a clean catch.

Three balls later, he also got rid off Nitish Rana, who was caught by du Plessis as Kolkata lost their second wicket within a space of three balls.

In the next over, Sunil Narine was caught at the boundary ropes off Josh Hazelwood, as Kolkata were reduced to 97/3 from 90/0, which promoted the fears of another infamous collapse like that of their previous match against Delhi in Sharjah.

The graph of asking run rate spiraled upward with every delivery which yielded less than a couple of a runs as the equation had come down to 84 needed off 44 deliveries.

A charged-up Chennai bowling attack found the chink in the Knight’s fragile middle-order as Kolkata kept on losing the wickets in quick-succession.

Thakur trapped Gill, who reached his second fifty of the season, to leave Kolkata in tatters. But this was not going to stop here as Shakib Al Hasan, Rahul Tripathi and captain Eoin Morgan also fell in quick successions as Kolkata’s hopes of their third title all but ended in a despair.

Earlier, Ruturaj Gaikwad and du Plessis shared a blistering 61-run partnership for the first wicket to give Chennai a blazing start. Both the batsmen played sensibly and laid down a strong foundation for a fighting total. They dominated the Kolkata bowling right from the word go and plundered runs all over the ground.

They brought up the fifty-run partnership in just six overs. Morgan tried all his bowlers but none of them could proved to be effective.

Both du Plessis and Gaikwad are in the stupendous form and have been the main cog in Chennai’s batting. They have scored more than 600 runs plus each in the tournament.

Gaikwad and du Plessis moved to the top and the third places in the table of the highest-scorer with 635 and 626 runs respectively.

Narine gave Kolkata first breakthrough after a long wait by getting rid of Gaikwad. The wily West Indian spinner changed the length of the ball seeing Gaikwad coming down the track as he miscued the shot and Mavi took a sitter.

Gaikwad’s dismissal brought respite to Kolkata camp briefly before Du Plessis and Robin Uthappa changed the gears to spur the run rate. Du Plessis carried on the good work from one end and added 63 runs for the second wicket with Uthappa, who played a quick-fire cameo of 15-ball 31 with the help of three sixes.

Uthappa was brought into the fold in place of a struggling Suresh Raina, He smashed a fifty against Delhi Capitals to cement his place in the side and provide stability to Chennai’s middle order.

Both the batsmen flexed their muscles and took 15 runs off the 10th over bowled by Shakib to launch the assault. In the next over, du Plessis plundered Ferguson for 17 runs.

He raced to his sixth fifty of the season with a six off Ferguson. Narine struck again to trap Uthappa in front of wickets as Chennai lost their second wicket. But a ruthless du Plessis was resolute to take the bull by its horn as he was particularly harsh on pace spearhead Ferguson and mystery spinner Varun Chakravarty.

Both Ferguson and Chakravarty conceded 96 runs together in their combined eight overs without taking any wicket.

Du Plessis shared a 68-run stand in just 6.3 overs for the third wicket with Moeen Ali, who also chipped in with 20-ball 37 to mark his return to the form when it mattered the most. Ali made his intent clear from the beginning and smacked three sixes and two boundaries during his stint at the crease as the dup propelled the score to 192/2, the highest in Dubai Stadium in this edition of the tournament.  Du Plessis was taken by Iyer off Shivam Mavi after smashing 86 as his 59-ball knock was studded with seven boundaries and three hits over the fence.