Matsuyama soars on eagle wings into share of Masters lead 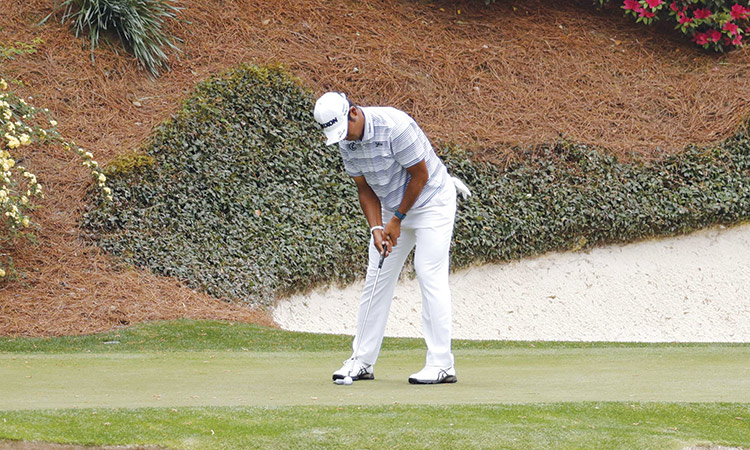 Hideki Matsuyama putts on the 12th green during the first round of the Masters on Thursday. Agence France-Presse

Japan’s Hideki Matsuyama eagled the par-5 eighth hole on Thursday to seize a share of the lead at the 85th Masters while many big names sputtered at firm and fast Augusta National.

Matsuyama, chasing his first major title, sank a 20-foot birdie putt at the par-45 second and rolled in a 25-footer for eagle at eight to stand at 3-under par after 11 holes.

American Will Zalatoris, one of six in the field of 88 making his Masters debut, eagled the par-5 13th and 15th holes to briefly match the leaders before a bogey at the par-3 16th dropped him one adrift.

Also one back were American Webb Simpson, the 2012 US Open champion, and Australian Marc Leishman.

Balls were rolling onto and off the fiery greens in perfect conditions, with severe penalties for those missing the green and then trying to stop a chip shot near the cup.

“Some world-class players are going to look like fools out here if this course stays firm and fast,” said sixth-ranked American Xander Schauffele.

Top-ranked defending champion Dustin Johnson, trying to become only the fourth back-to-back winner at Augusta National, opened with a bogey but answered with a birdie at the second. He found a fairway bunker and made bogey at the par-4 fifth to join a pack on 1-over at the turn.

He could join Tiger Woods, Jack Nicklaus and Nick Faldo as the only back-to-back Masters winners, the first since Woods in 2001-02.

World number 12 Rory McIlroy, a four-time major champion seeking a victory to complete a career Grand Slam, stumbled to three bogeys in a row starting at the fifth.

England’s Lee Westwood, trying to become the oldest Masters winner at age 47, took a double bogey at the par-4 third and bogeys at the fifth and seventh dropped him well back.

Four-time major winner Brooks Koepka, playing despite right knee surgery last month, opened with six pars before taking a bogey at seven and responding with a birdie at the eighth to make the turn at level par.

“If I didn’t think I could win, I wouldn’t be here,” Koepka said.

Third-ranked Spaniard Jon Rahm, who only arrived Wednesday after being with his wife for the birth of their first child, birdied the par-5 second to put himself among the few under par in the early going on the famed layout.

Three other contenders are off in the afternoon’s final three trios.

Second-ranked Justin Thomas, the 2017 PGA Championship winner, can overtake Johnson for world number one with a victory. The Players Championship winner has finished progressively better in every Masters start, placing fourth last year.

Reigning US Open champion Bryson DeChambeau, a winner at Bay Hill, brings his long-driving style to Augusta with a prototype driver in his bag and plans to challenge par-5 and long par-4 holes from his very first tee shot.

Three-time major champion Jordan Spieth, who snapped a four-year win drought last week in Texas, hopes to don the green jacket as he did in 2015.