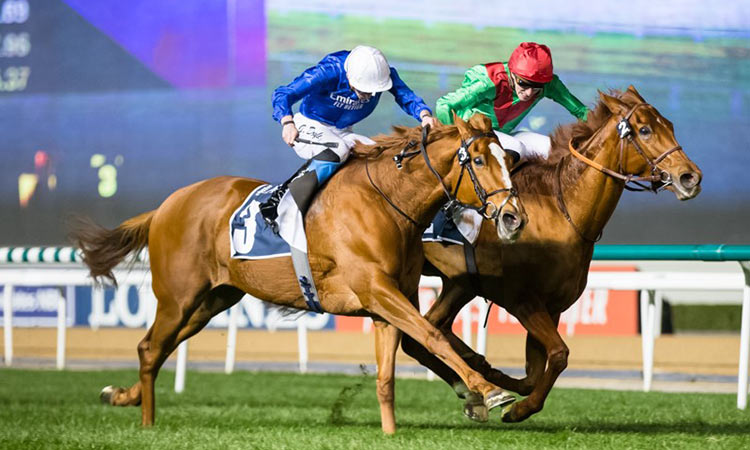 Magic Lilly in action during Cape Verdi Stakes on Thursday.

Charlie Appleby-trained Magic Lilly was steered to victory by jockey James Doyle at the $250,000 1600m Cape Verdi Stakes by a short head in 1:34.84 minutes at Meydan in the third meeting of the Dubai World Cup (DWC) Carnival on Thursday.

James said: “I had my head down to ride and didn’t think we’d got up (to win), but she’s tough and very game. It didn’t go entirely our way. The plan was to lead or if not be very close, which is what happened.

“When (Dubai Blue) went by me (on the backstretch), it sort of set her alight. She was over-racing a little bit. She’ll definitely be better going another furlong. We think she’s a nine or ten-furlong filly.”

Pierre-Charles Boudot who rode Nisreen to second place finish said: “She ran very well. The pace was very strong and the way was open just at the turn and she came in really easy. She was very courageous.”

William Buick, jockey of Beyond Reason, who finished third, said: “She ran well. She would be better back to seven furlongs.”

Curtis said:“He’s improving with every run. It’s unbelievable. The way he travelled today was even better. He’s a handful, but it’s probably good thing, because if he wasn’t a handful, they probably wouldn’t have flown me out to ride him.

“He does everything a horse should do to get himself beat, but he keeps winning. In the prelims he gets very warm and is notorious for it. He gets hot and sweaty, but it doesn’t seem to bother him in the race.

“He ran a bit fresh and keen the first two furlongs, but once he got into a rhythm, I was delighted. He picked them up well and kept going all the way to the line. It was a good performance. He ran a good race and the time backed it up.”

Trainer Mick Channon said:“He has always been a good horse, he was in good form and we had the (nerve) to go and it worked out. We’ve always thought a lot of him.

“He won a Listed race as a 2-year-old and was consistent last year. It’s hard to place these horse, but we knew we could be competitive tonight. You never know going against Godolphin. We’ve always been competitive and never slow at having a crack (at big races).

“That’s why we have race horses. We’ll have a go at the best if we can and go on to the next race (at Meydan).”

Owner CR Hirst said: “It’s really fantastic. We’re over the moon. We didn’t expect him to run so well in his first race. Obviously, he hasn’t run for a few months.”